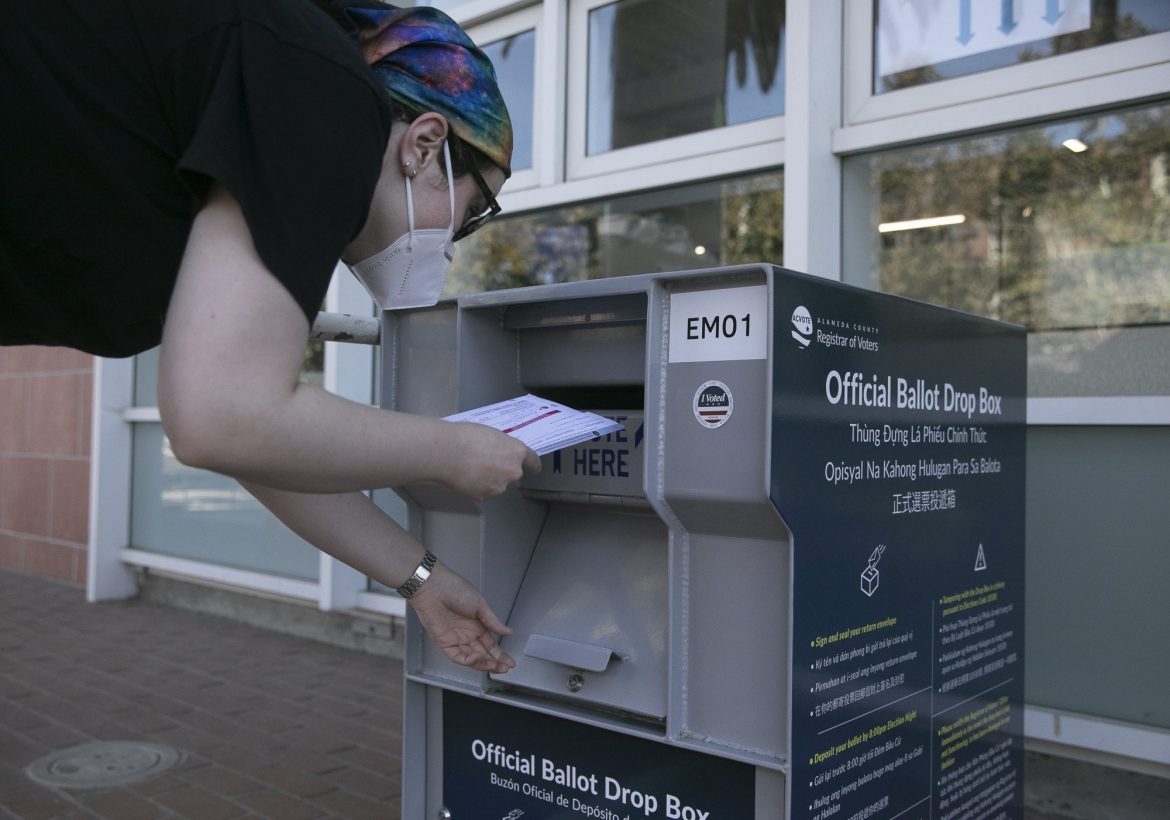 A voter drops off her ballot at Emeryville City Hall on Oct. 15, 2020. Photo by Anne Wernikoff for CalMatters

Beyond the top line

Today is the last day to register online to vote — and if you aren’t one of the more than 3.5 million Californians who have already returned their ballots, it’s time for a closer look at some of the 12 statewide propositions.

You’ve probably heard that Prop. 15, one of the most controversial and high-profile measures on the November ballot, would heft taxes on some commercial properties to raise up to $11.5 billion annually for local governments and schools. But a less-considered aspect is how the measure would affect California’s housing crisis, CalMatters’ Matt Levin reports.

Some say Prop. 15 would incentivize local governments to favor commercial projects, which would contribute both sales taxes and higher property taxes to city coffers. Others say Prop. 15 would actually increase housing supply by propelling tax-averse developers to redevelop aging commercial or industrial properties into homes. For more on the ins and outs of these arguments, check out Matt’s report.

Meanwhile, Prop. 20‘s main tagline is that it would roll back certain criminal justice reforms. But one little-noticed provision would expand the state’s DNA database by collecting samples from people convicted of certain misdemeanors, including child and elder abuse, domestic abuse, prostitution with a minor, shoplifting, forgery and drug possession, CalMatters’ Byrhonda Lyons reports.

And though much of the attention on Prop. 16 has focused on how reinstating affirmative action would affect university admissions, the Los Angeles Times takes a look at how it would impact the multibillion-dollar business of public contracting.

For more, check out CalMatters’ election guide. And if you miss today’s online registration deadline, you can still register to vote at your local county elections office, polling place or vote center.

The coronavirus bottom line: As of 9 p.m. Sunday night, California had 867,317 confirmed coronavirus cases and 16,943 deaths from the virus, according to a CalMatters tracker.

After a week of legal threats and dueling allegations of fraud and voter suppression, the brouhaha over the GOP’s ballot boxes went out with a whimper on Friday: No charges were announced and both sides declared victory, Ben Christopher writes.

A federal judge approved Exide’s bankruptcy plan Friday, allowing the company to walk away from its shuttered battery-recycling plant in Los Angeles and leave California taxpayers to shoulder millions of dollars in cleanup costs and health risks from lead and other toxic pollutants. But part of the blame also rests at the feet of California regulators, who allowed the company to operate for more than 30 years despite its repeated environmental violations, the Los Angeles Times reports. Advocates also fault the state Department of Toxic Substances Control for its lackluster oversight. Last month, Gov. Gavin Newsom vetoed a bill that would have increased transparency and accountability within the department. He said Friday the state plans to appeal the federal judge’s decision.

Tensions in the battle over school reopenings are reaching a fever pitch, with influential teachers unions digging in their heels and demanding improved safety measures as increasingly frustrated lawmakers and parents push for a return to campus. The two groups’ arguments evoke the chicken-or-the-egg paradox: Unions say reopening too quickly will harm disadvantaged communities — many of which are experiencing higher rates of COVID-19 infection — while lawmakers and parents say school closures are disproportionately affecting disadvantaged communities and widening the state’s achievement gap.

San Francisco Mayor London Breed, one of 13 mayors who recently urged the state to safely reopen schools as soon as possible, issued a scathing statement Friday in response to the San Francisco Unified School District ordering 44 schools linked to figures like Abraham Lincoln and Thomas Jefferson to change their names.

About 110,000 Californians purchased guns during the first five months of the pandemic, 43% of whom did not previously own a firearm, according to a preprint of recent survey data from UC Davis researchers. The news comes amid a concerning uptick in gun violence and homicide rates in California cities that experts say is attributable in part to the pandemic, which has driven up anxiety and depression rates as the economy spirals downward.

Californians’ anxieties about unrest were echoed in another recent survey in which 82% said they feared many Americans won’t respect the outcome of the November election. The Los Angeles Police Department recently told officers they may need to reschedule vacations during the week of the election.

Something that likely wasn’t on your 2020 bingo card: Los Angeles Rapper Nuke Bizzle Releases Song Called “EDD,” in which he brags about defrauding California’s unemployment department while waving a stack of debit cards. On Friday, federal authorities arrested Bizzle on charges that he fraudulently obtained more than $1.2 million in federal benefits distributed by the Employment Development Department. If convicted, he could face 22 years in federal prison. “I just got rich off of EDD,” Bizzle raps in the eponymous song, which was released in September. “Get on that laptop, I’m working out, 25 claims in four hours.”

EDD, which has doled out $101 billion in benefits since the onset of the pandemic, recently reopened after a two-week reset period during which it implemented a new ID-verification tool to mitigate fraud and speed up processing times. Though concerns about the tool’s efficacy remain, EDD’s claim backlog has fallen from about 1.6 million to just over 1.2 million, according to data released Thursday. Overall unemployment also dropped from 11.4% in August to 11% in September, with the hard-hit leisure and hospitality sector notching more than 48,000 new jobs.