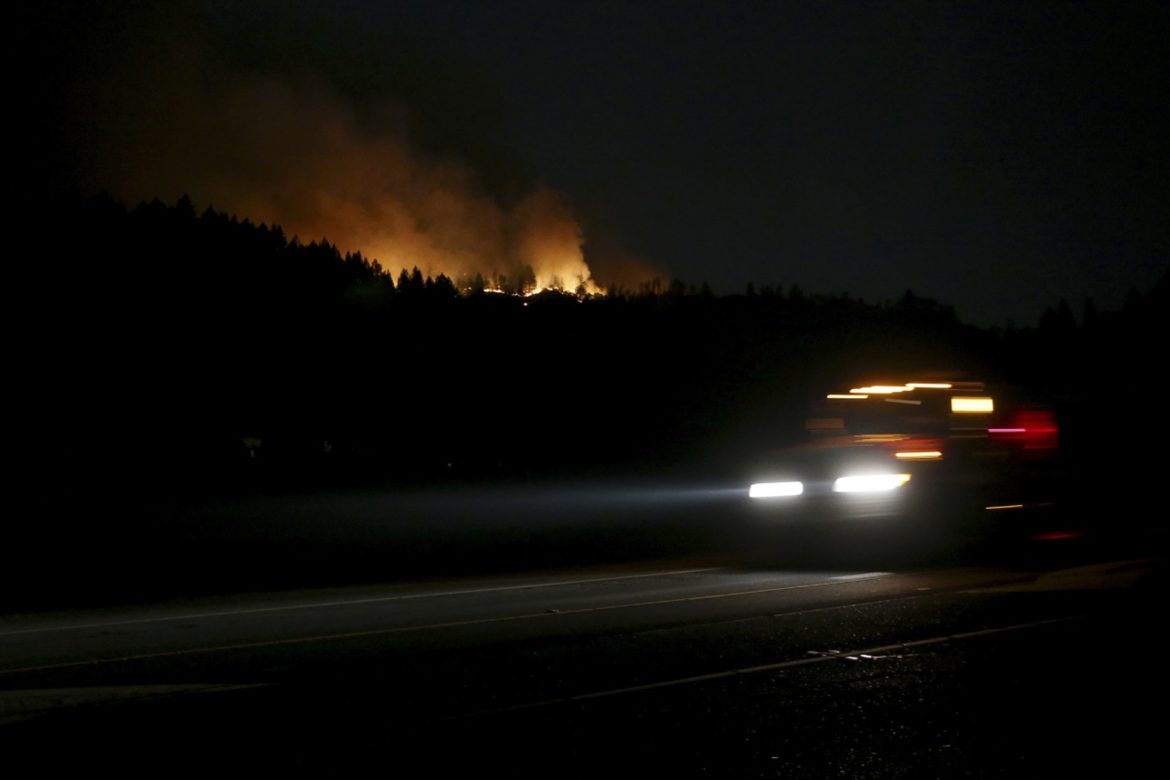 Dangerous fire weather is expected to persist across much of Northern California through Saturday amid dry, powerful winds and elevated temperatures — likely adding fuel to the Glass Fire tearing through Wine Country.

The blaze, which has already forced nearly 100,000 evacuations and destroyed around 150 homes in addition to iconic restaurants and wineries, has charred nearly 57,000 acres and is just 5% contained. More than 2,100 firefighters are battling the conflagration, which is threatening more residential communities, Gov. Gavin Newsom said Thursday.

The 24 major fires raging across California are also putting pressure on the state’s electrical grid, which succumbed in August to rolling blackouts. Operators issued a flex alert Thursday, warning of potential shortages due to the heat wave. Wildfires have also knocked generators out of commission and their smoke has blocked out the sun, reducing available solar energy.

In welcome news, firefighters on Thursday announced 100% containment on the SCU and LNU Complex fires, both of which ignited Aug. 16. The blazes — the third and fourth largest in California history — collectively burned around 760,000 acres, killed five people and destroyed 1,713 structures.

However, the monstrous August Complex Fire, the largest in California history at nearly 1 million acres, is continuing to burn amid gusty winds. And wildfires this year have razed about 4 million acres, a staggering number considering California’s previous record was 1.98 million acres.

Newsom on Thursday slammed President Donald Trump, who has repeatedly said California’s historic fires are due to poor forest management.

Counties hoping to enter a less restrictive reopening tier now have to meet a health equity metric in order to do so, the state Department of Public Health announced late Wednesday. The new requirement aims to address disproportionate infection and death rates in low-income, Black, Latino, Pacific Islander and essential worker communities. To move into a less restrictive tier, a county must now show that the coronavirus positivity rates in its most disadvantaged neighborhoods — as defined by 25 socioeconomic factors — aren’t significantly higher than the county’s overall positivity rate and submit a plan to bring down positivity rates in disadvantaged communities.

The new requirement could prove challenging for many counties. Alameda County, for example, has an overall positivity rate of 4.5% — but some neighborhoods, including East Oakland and Fruitvale, have positivity rates of up to 15.6%.

The new metric will almost certainly slow large counties’ reopening, heightening tensions between Newsom, lawmakers and businesses. Disneyland has been a particular point of contention. The company this week partially blamed California’s strict reopening rules for forcing 28,000 layoffs in Anaheim and across the country, and chairman Bob Iger abruptly quit Newsom’s economic recovery task force. Asked Thursday if he would allow theme parks to reopen early, Newsom said, “Unequivocally, no.” His administration plans to release theme park reopening guidelines today — but they aren’t supported by the California Attractions and Parks Association.

The median rent for a one-bedroom apartment in San Francisco, the nation’s most expensive city, fell to $2,830 in September — a 20.3% drop from last year and one of the largest yearly decreases ever recorded by Zumper, according to a Thursday report from the online rental marketplace. It was also the first time the city notched a one-bedroom median rent below $3,000 in Zumper’s database. Median rents also fell in San Jose, Oakland, Los Angeles, and San Diego, all of which are in the top 10 most expensive cities in the nation.

The news comes as San Francisco hit its highest office vacancy in nearly a decade at 14.1%. Only 384,667 square feet of new leases were signed in the third quarter — the lowest ever recorded by brokerage firm Cushman & Wakefield. As remote work fuels an exodus from California’s most expensive cities, home prices and sales are skyrocketing. The median home price shot up to a record $706,900 in August as sales reached their highest level in more than a decade.

3. Feds to crack down on California

As the election nears, the Trump administration plans to launch an immigration enforcement campaign this month to crack down on at least three “sanctuary” jurisdictions, starting with California, the Washington Post reports. The move comes a few months after the U.S. Supreme Court upheld the Golden State’s sanctuary law, which limits cooperation between local law enforcement and federal immigration agents. It also comes a few months after Trump threatened to send federal law enforcement to Oakland “and other cities run by liberal Democrats” following protests over the death of George Floyd, sparking intense pushback from Newsom and Oakland Mayor Libby Schaaf.

If the 12 propositions on California’s November ballot seem complicated or intimidating, look no further than CalMatters’ Props-in-a-Minute playlist. In these fun and informative 1-minute videos, CalMatters reporters walk you through each of the propositions you’ll be voting on next month. Prefer reading to watching? Check out CalMatters’ comprehensive voter guide.