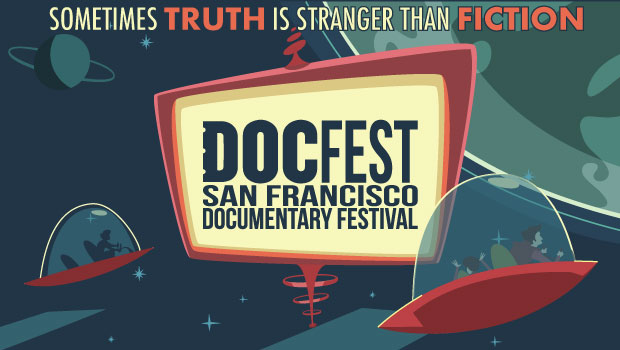 The 19th annual San Francisco Documentary Festival ventures into the virtual realm this year and once again traverses the globe to pluck out mind-blowing true stories to stir souls and spur discussions.

From an Alameda cyclist’s passion project to spin his wheels and photograph immigrants along the way, to a Point Richmond artist’s inventive creations that brighten neighbors’ days, this year’s 49-film program is stuffed with tales that inspire and inform.

The SF DocFest starts Sept. 3 with a gamer’s must-see — Joshua Tsui’s “Insert Coin,” a dive into Midway Games’ rise and fall. The centerpiece fieature is Hannah Jayanti’s “Truth or Consequences,” a visit to the quirky New Mexico town and its wary relationship with a new neighbor, the first Spaceport. “Truth” producer Sara Archambault is this year’s recipient of DocFest’s annual Non-Fiction Vanguard Award.

The program runs through Sept. 20 and during that  stretch you can sample nonfiction films both big and small, many of which follow Bay Area people doing extraordinary and sometimes scandalous things.

Here are a few of the documentaries to check out.

With his Huckleberry bike shop T-shirt and overloaded pannier bags, Alameda’s Erik Mathy strikes a distinctive impression while cycling the sometimes-isolated stretches of the Butterfield trail, a route he partially followed to capture the immigrant experience via his vintage cameras. Mathy learned to embrace the roads less traveled since prearranged interviews canceled, leading him to stumble upon better discoveries — a Native American mural outside of an L.A. art gallery and a Phoenix Buddhist church. It is in these often unexpected moments when “Ride” sprints off into exciting terrain. Berkeley filmmaker Dan Cowles makes us feel as if we are drafting behind Mathy, who makes a most welcome companion, and cheerily describes himself as a “photographer with a cycling problem.” By the end of the journey, Mathy hasn’t only collected beautiful images, but haunting ones as well.

Don’t let the brevity deter you. In under 10 minutes, Jane Selle Morgan’s uplifter about a talented community artist creating miniature fairy worlds for unsuspecting neighbors reminds us that there is good in this temperamental world. It’s soothing like a cup of warm tea about doing something good when feeling bad. It’s part of the Plays in Shorts Program 1 — Smallville and is destined to make you smile.

Director Gail Willumsen tagged along with the groundbreaking Trans Chorus of Los Angeles for about a year, from the tryouts to the rehearsals to the transexual choir’s 2016 debut performance. That’s time well spent since choir members feel more at ease as they relate their stage fright fears and how they process with advice and suggestions from tireless artistic Lindsey Deaton. “Loud” wraps us up into the lives of this chorus and culminates with the performance of their first concert, guaranteed to bring a tear to your eye.

Certain music documentaries fall into a trap, fawning all over their subjects and not bringing a meaningful perspective. That’s fortunately not the fate befalling San Francisco director Chelsea Christer’s rockin’ doc — the fest’s closing night film. Although Christer does seem like a fan, she’s diligent about charting the rise and fall and rise again of the Oakland indie rock band The Matches. Her entertaining documentary takes us on a familiar path taken by creative bands as they run into a dead end due to a lack of business savvy. The band itself is full of charmers — Shawn Harris, Matt Whalen, Jon Devoto and Justin San Souci — who survive a name change (originally they were called The Locals) and a manager with questionable industry acumen. Then there’s the music; it’ll make you want to tune in to The Matches on Spotify right afterward.

Christopher McDougall’s 2009 phenomenon “Born to Run: A Hidden Tribe, Superathletes, and the Greatest Race the World Has Never Seen” prodded runners to ditch their shoes and also introduced them to the Tarahumara native Mexican tribe. Although the bestseller put Copper Canyon ultra runners and their footwear into the spotlight, the book left many hungering to know more about the lives of tribe members. Here’s your chance to find out. While there’s a Bay Area connection to the tale — Oakland native Micah True started the endurance race and while it is featured in Bernardo Ruiz’s excellent documentary — the focus in “Race” is on the Tarahumara, their struggles to preserve their cultural identity, and with violent drug cartels. Part of ESPN’s excellent 30 for 30 series.

• “Dharma Rebel”: Tatted-up Buddhist teacher Noah Levine unconventional teachings turned him into one of San Francisco’s most high-profile spiritual practitioners, for a while. Filmmaker Babeth Mondini-VanLoo originally planned to center her documentary on Levine’s addiction program and then a sexual misconduct claim changed the focus and scope of her documentary.

• “One Word Sawalmem”: UC Berkeley environmental studies student Michael “Pom” Preston — of the Winnemem Wintu tribe — speaks out about the Trump administration’s plan to raise the Shasta Dam in this 20-minute documentary, part of the “Plays in Shorts Program 2 — Third Rock from the Sun.”

• “The Palindromists”: Anyone smitten with word games should make a mad scrabble to Vince Clemente’s doc, which delves into the history of words/phrases that can be read backward and forward. One of the film’s prominent subjects is San Francisco author Jon Agee — part of a group that puts on world championships.

To purchase tickets ($10) and for a full list of events and films, visit https://sfdocfest2020.eventive.org/welcome. A DocPass purchased for $150 grants access to all films.