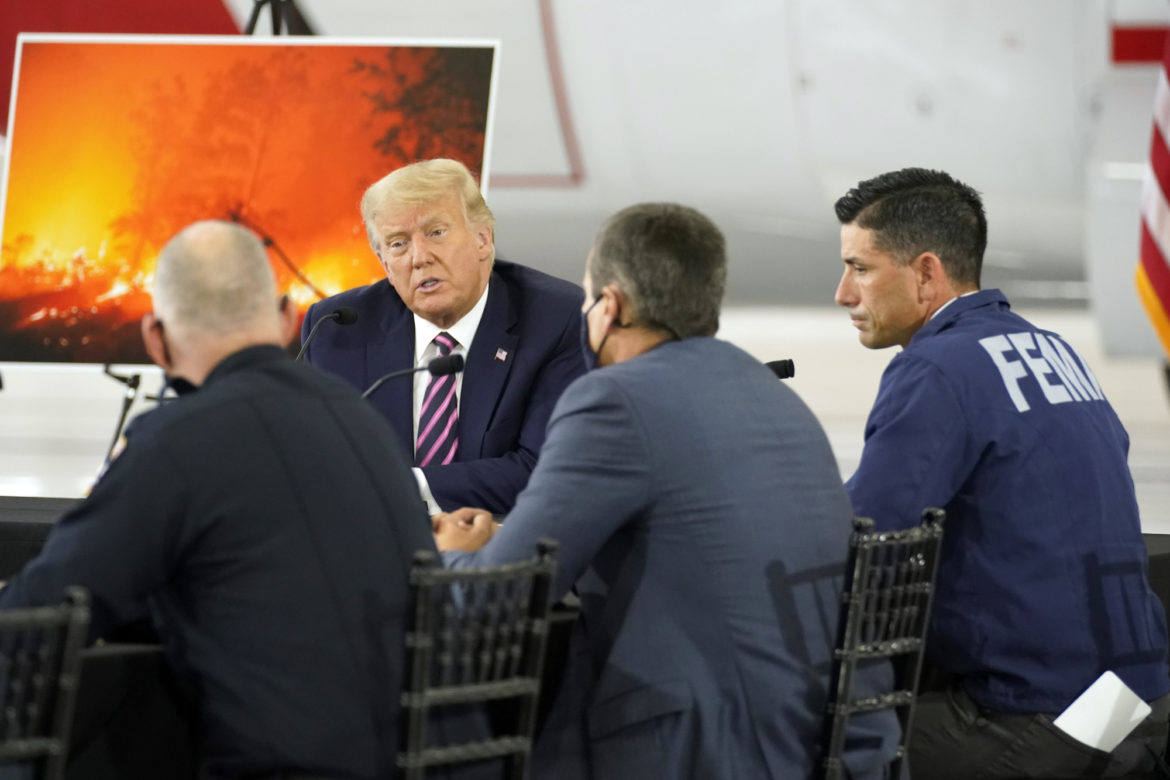 Golden State in the spotlight

Harris’ visit comes a day after Trump had his own wildfire briefing with Newsom near Sacramento. As CalMatters’ Laurel Rosenhall reports, the meeting presented a thorny political situation for the governor, who relies on Trump for federal disaster aid but is actively campaigning for Biden to win the presidency. Newsom and Trump also disagree on the principal reason for the fires, which Newsom says is a “climate damn emergency” and Trump says is forest mismanagement.

Biden and Trump also emphasized their different stances on the issue Monday.

Biden also seized on a viral moment from the wildfire briefing in which Trump said, “I don’t think science knows, actually,” in response to California Natural Resources Secretary Wade Crowfoot’s comment that science shows temperatures will keep keep rising as a result of global warming.

Another California event that’s skyrocketed into the presidential campaign: the Saturday ambush and shooting of two Los Angeles County sheriff’s deputies by a gunman who fired into their patrol car at close range. (The deputies survived the shooting and are recovering in the hospital.) Both Trump and Biden were quick to condemn the attack, with Trump calling for the gunman to receive the death penalty and Biden tweeting, “This cold-blooded shooting is unconscionable and the perpetrator must be brought to justice.” Although the motive for the shooting remains unknown, it brought to a head long-simmering tensions between police and civilians in the wake of a series of high-profile police shootings of Black people and subsequent protests and calls to defund the police. And both Trump and Biden are leveraging the shooting to drive home different political points.

As Trump and Newsom tussled Monday over climate change, California filed its 91st lawsuit against the federal government for, you guessed it, rolling back environmental protections — in this case Obama-era standards that limited methane emissions caused by oil and natural gas production. The new standards will lead to about 850,000 more tons of methane emissions between 2021 and 2030, according to estimates from the federal Environmental Protection Agency. More than half of California’s lawsuits against the Trump administration deal with federal environmental laws.

Undocumented workers in Los Angeles’ sprawling underground garment industry are paid about 5 to 12 cents per piece of clothing, working 10 hours a day for five-and-a-half days a week. A bill that would have paid them by the hour, not by the piece, recently failed in the state Legislature amid opposition from the powerful California Chamber of Commerce, CalMatters’ Nigel Duara reports. The bill would have ensured garment workers a minimum wage and extended wage-theft liability from the factories to the brands and retailers that sell the clothes — often at a significant markup. But it caved under pressure from business groups, who protested increased costs and regulatory burdens amid a recession. State Sen. Maria Elena Durazo, a Los Angeles Democrat, already plans to bring the bill back next session, but noted “the organizations that oppose this bill are not gonna back off.”

OK, so by now you know there are 12 propositions on California’s November ballot. But do you know how you’re going to vote on them? Fear not — CalMatters has a fun, interactive game to help you figure out where you stand on these controversial, complex issues. Check it out here at gimmeprops.calmatters.org. And if you prefer good old-fashioned reading, be sure to bookmark CalMatters’ comprehensive voter guide for everything you need to know about the upcoming election.