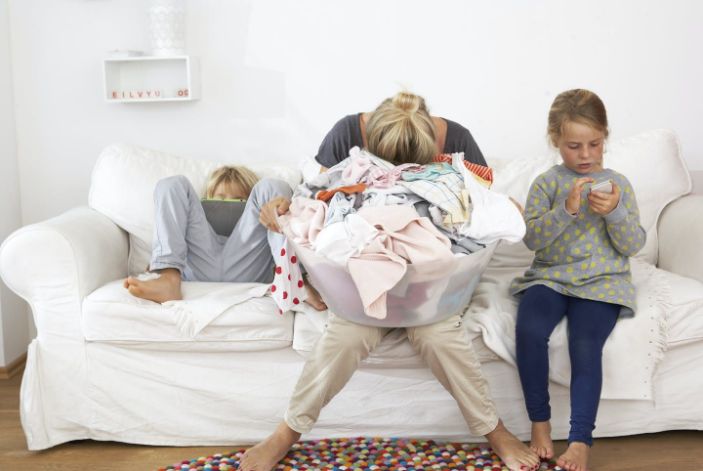 Many families have had a hard time since schools and day care centers had to shut their doors. (Photo courtesy of Westend61/Getty Images, via The Conversation)

The Research Brief is a short take about interesting academic work.

Parents and children surveyed about the COVID-19 pandemic in late April and early May of 2020 — when most schools and day care providers closed their doors — said they had become more stressed out. In response to our questions about their feelings and thoughts, these 183 parents in Western states who were between the ages of 18 and 55 years old replied that their mental and physical health and interactions with others have deteriorated. Most of the families who participated were white (66.7%), 21.3% were Latino, 7.1% identified as mixed race or “other” and 4.9% were Black.

Parents who had lost their jobs and other sources of income, were unable to see family or friends, struggled to oversee their children’s schoolwork or had many anxiety and depressive symptoms were more likely to feel stressed, as indicated by responses to 10 items each on a scale of 0-4. They were also more likely to be at risk for abusive parenting.

At the same time, parents said they were finding ways to alleviate stress and its consequences. For example, parents who perceived that they had more control over their lives during the early months of the COVID-19 pandemic and who felt like they had enough people who they could rely on for comfort, support and encouragement were less likely to feel stressed out or exhibit signs that they were at risk of abusive parenting.

Officially, reported child abuse cases are declining, according to the initial data. That’s consistent with other data showing declines in child maltreatment reports when school isn’t in session, because when children stay home, abuse is more likely to go unnoticed. But this trend doesn’t necessarily mean that incidents are down. Indeed, hospitals are reporting that they are seeing more evidence of children injured due to abuse during the COVID-19 pandemic.

What other research is being done

The pandemic has increased the prevalence of many common sources of family stress, placing children at risk of abuse and neglect. Several studies indicate that when parents can’t secure child care or housing or get jobs, it can increase children’s vulnerability to maltreatment.

However, it is promising that families are also using several strategies to deal with the pandemic, such as turning to hobbies or other activities to make the situation better or seeking comfort or advice from others.

Many communities, including those in districts sticking with distance learning as the 2020-2021 school year gets underway, are increasing their efforts to protect and support vulnerable children. We believe that some of the best ways they can do their part is by offering counseling services and free food as well as consistently checking in with families to spot evidence of extreme family stress.

How do we do our work

We are developmental and social scientists who work with families. We study parent-child relationships and stress.