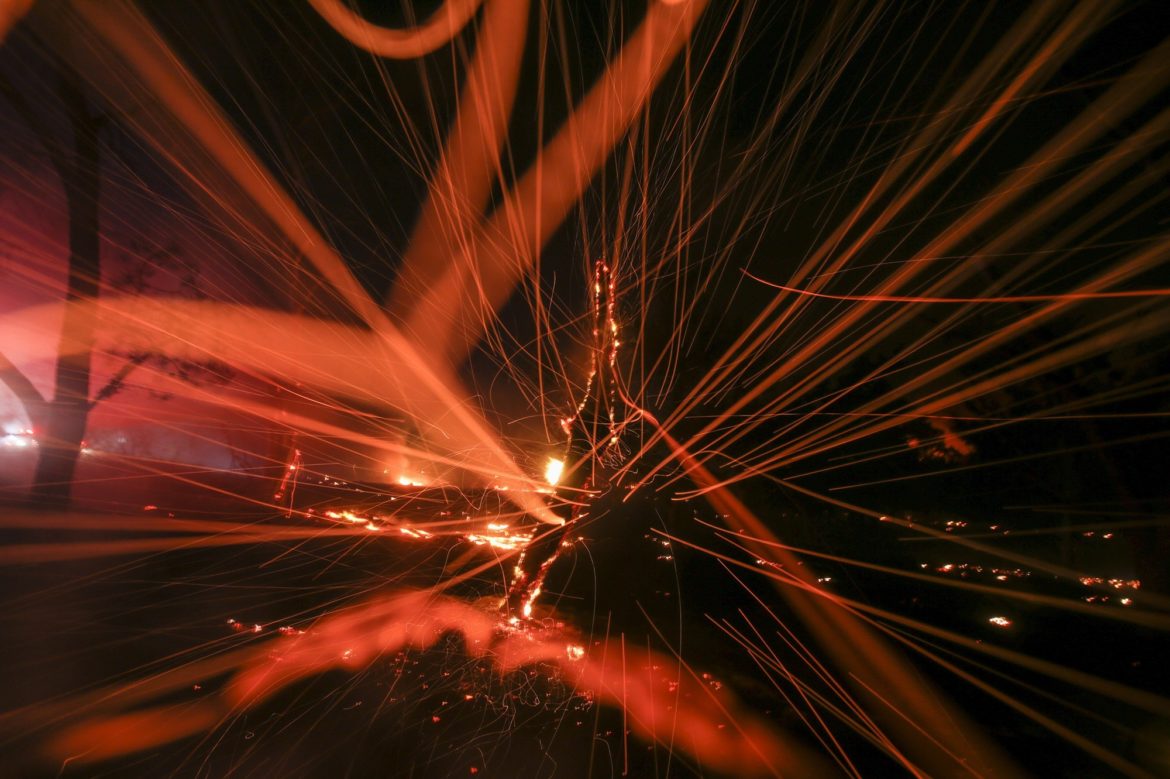 Wind whips embers from a tree burned by a wildfire in Riverside, Calif. Thursday, Oct. 31, 2019. Santa Ana winds are expected to linger for a final day after driving more than a dozen wildfires through California. (AP Photo/Ringo H.W. Chiu)

PG&E began shutting off power for about 172,000 customers in 22 counties late Monday night to mitigate fire risk amid strong winds forecasted to pummel much of the northern part of the state through Wednesday. In Southern California, powerful, dry Santa Ana winds at speeds of up to 50 miles per hour are expected through Wednesday.

The elevated fire danger, which follows a weekend of record-shattering high temperatures, comes as three of the four largest fires in California history simultaneously rage across the state. Gov. Gavin Newsom on Sunday declared a state of emergency in five counties for three new fires — the Creek Fire, El Dorado Fire and Valley Fire — that exploded Friday and Saturday. More than 200 people were evacuated by military helicopters after getting trapped by the Creek Fire, which generated enormous pyrocumulonimbus clouds and likely set off fire tornadoes.

Wildfires have now burned more than 2 million acres this year, setting a modern-day record for the Golden State. And peak fire season hasn’t yet set in. (Nor, for that matter, has peak Santa Ana wind season.)

California on Friday surpassed 21 million active registered voters for the first time in history, Secretary of State Alex Padilla announced. An updated voter breakdown will be released later this month, but data from July show that the percentages of Democrats and independents have increased since 2016, while the percentage of Republicans has decreased.

Other key findings from the July voter breakdown:

President Trump threatened Sunday to withdraw federal funding from California schools that plan to incorporate into their curriculum the New York Times’ 1619 Project, which “aims to reframe the country’s history by placing the consequences of slavery … at the very center of our national narrative.” It’s unclear how many schools plan to use the project. Nevertheless, the president’s threat drew a Monday rebuke from California Superintendent of Public Instruction Tony Thurmond.

3. New unemployment benefits on the way

In a timely celebration of Labor Day, California’s unemployment department on Monday began sending $900 in federal benefits to millions of jobless workers — about two weeks after the Golden State’s application to President Donald Trump’s program was approved. The payment covers three installments of a $300 weekly benefit retroactive to the week that ended Aug. 1. Workers will later receive a $600 payment for an additional two weeks of benefits. To be eligible for the federal benefits, workers must be receiving at least $100 weekly in state benefits and have certified their unemployment is related to COVID-19.

The two-week turnaround time seems to represent progress for California’s beleaguered unemployment department, which in August said it could take up to 20 weeks to process new federal benefits. However, lawmakers on Thursday approved an emergency audit of the department amid reports of fraudulent claims — even as another 1 million remain backlogged.

Undocumented Californians could receive $600 in emergency grocery money and those who pay taxes could receive the state’s tax credit for low-income workers starting next spring if Newsom signs two bills lawmakers recently sent to his desk, CalMatters’ Jackie Botts reports. The bills represent lawmakers’ latest attempt to patch together a partial pandemic safety net for undocumented Californians, who aren’t eligible for unemployment benefits or federal stimulus payments. Left with no other option to stay afloat, many have been forced to keep showing up to work — even under unsafe conditions.