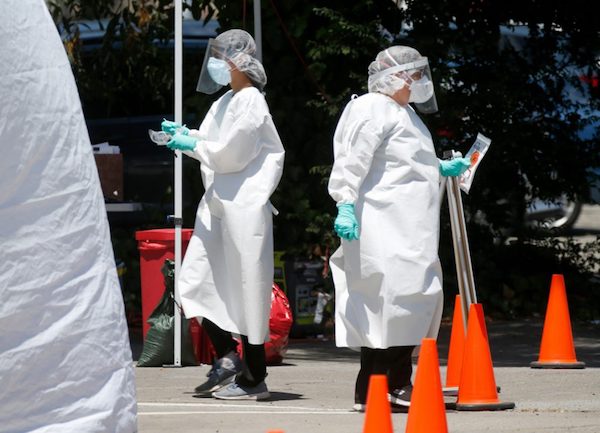 California’s coronavirus case and hospitalization rates are trending in the wrong direction and could hamper some counties’ plans to reopen businesses, the state’s Health and Human Services secretary said Friday.

Case and hospitalization rates have trended up in recent days as the state begins to collect data from cases contracted during Labor Day weekend, according to Dr. Mark Ghaly. Cases may also be rising slightly as counties have begun moving out of the state’s most restrictive reopening tier, allowing them to reopen restaurants and gyms with limited capacities.

In addition, state residents who have been evacuated due to recent wildfires could be contributing to the uptick in cases as evacuees may interact with family or friends who live in different households, raising the chance of spreading the virus, Ghaly said.

“We’re seeing some early signs that the positive disease and healthcare trends that we’ve been experiencing and, frankly enjoying because of these great behaviors over the last many weeks have started to slow,” Ghaly said during a briefing with members of the media.

New cases have trended down statewide since the end of July and beginning of August, even when accounting for a rise in daily reported tests. The state’s 14-day average of daily positive tests has fallen from a peak of 9,504 on July 4 to 3,315 on Monday, the lowest level in three months. Those positive tests have trended up as the week has worn on, Ghaly said.

State public health officers are forecasting a short-term spike in statewide hospitalizations, which have fallen from a high of nearly 9,000 in late July to 2,474 on Friday.

However, those hospitalizations are expected to increase by roughly 89 percent over the next month to nearly 5,000. While the state has dealt with that level of hospitalizations before, Ghaly said, the looming threat of flu season in conjunction with rising coronavirus hospitalizations would be uncharted territory. “We see things coming together that we want to make sure we’re very vigilant around to ensure that even if we go up a little bit with our hospitalizations, we don’t continue to have high rates and even come close to the numbers we saw during the summer,” he said.

Ghaly reiterated his previous stance that it’s important for state residents to avoid letting their guard down about the coronavirus and to continue following state public health guidance like wearing a mask and physically distancing to reduce the virus’ spread.

“Indeed, there is concern and we have the tools to reduce transmission,” he said. “And by doing these simple things, we can hopefully bring these early trends of increase back down and help us get back to where we were just a week or two ago.”

One thought on “Statewide coronavirus case rates trending up, could hamper reopening”