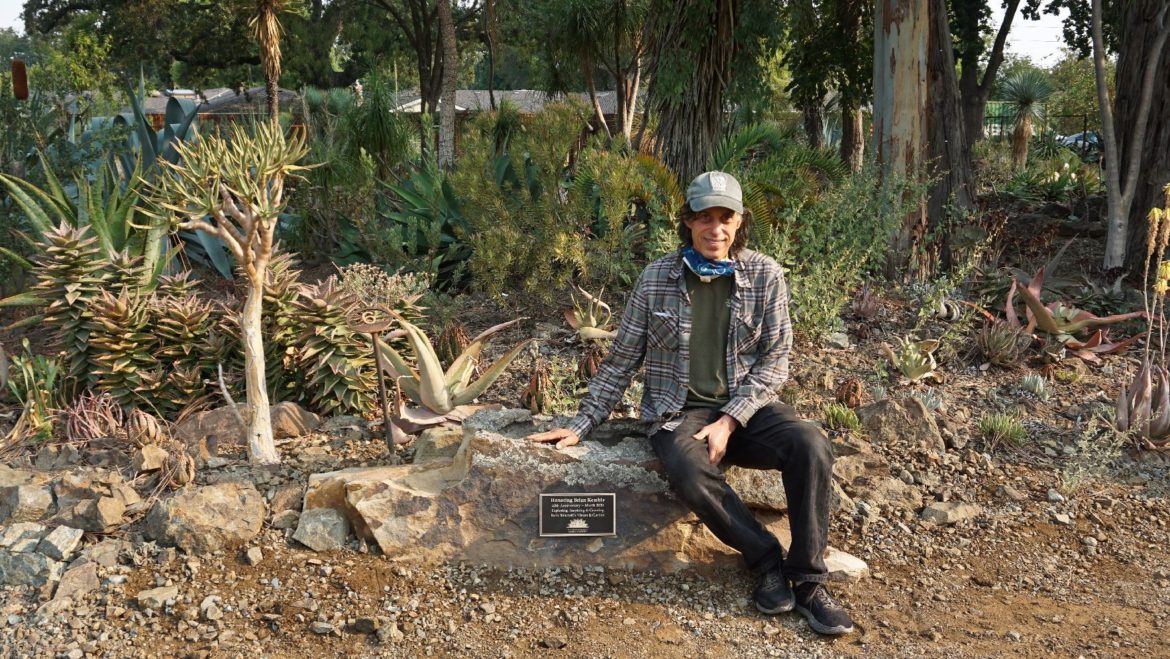 Ruth Bancroft Garden & Nursery curator Brian Kemble takes a short break alongside the boulder on the grounds that now bears a plaque honoring his 40 years of service. (Photo courtesy of Adrian D'souza)

Forty years into his dream job, Ruth Bancroft Garden & Nursery curator Brian Kemble is never entirely alone in his head as he goes about planting, hybridizing, photographing, documenting and building databases. He is still channeling, on a daily basis, the lovely, cactus-crazed lady who inspired, then hired him, back in 1980.

Kemble, 75, is the designated keeper of the flame lit by the late Ruth Bancroft, who over the course of decades turned her 3.5-acre plot of land in Walnut Creek into a world-renowned showcase for the variety, hardiness and beauty of ornamental, drought-tolerant plants.

A couple of weeks ago, Kemble’s colleagues at the garden surprised him by drilling a plaque in his honor into a large boulder on the premises. He can’t tell you what it says, exactly, because he hasn’t actually read it yet. But he was both thrilled and, yet again, a bit flummoxed by the reminder.

“It made me feel very glad that my efforts in the garden were appreciated,” he said. “And it also brought back to me the great burden that I feel, having had Ruth turn over the planting of the garden to me and my responsibility for making sure that her vision is adhered to, and the garden is in a good direction for the future.”

Gretchen Bartzen, executive director of the garden, notes that it became a nonprofit open to the public in 1992 as the first project of The Garden Conservancy, a national organization to preserve private gardens for public use that was inspired by Bancroft herself, who died in 2017 at the age of 109.

Bartzen cites two factors that render the garden unique: “It was, as far as we know, one of the very first examples of an entirely drought-tolerant garden in the United States,” she said. “And also, her garden design was unusual at the time. She was one of the first people to ‘paint’ with plants — in other words, creating layers of textures — and she tried to imitate nature as much as possible.”

Kemble, now the resident “artist,” can take up that theme and run with it.

“That has to do with Ruth’s composing when she planted,” he insisted. “She would first put in the largest element, the big plants, the focal points. And then she would flesh in between them with patches of plants, and she could see it work like a mosaic, having a pool of orange over here and a pool of blue over there.

“One of the wonderful things about succulents,” he continued, “is the plants themselves often have multiple colors, not just when they’re in bloom, but the rosette that is orange or pink or blue, or what have you. And so they’re rending themselves, painting with plants.”

Kemble, a San Francisco resident, will be both honoree and a presenter at Ruth Bancroft Garden’s upcoming annual fundraising gala, held virtually from 5 to 6 p.m. on Sept. 19. (It’s $10 to register online, but attendees receive a $10 credit at the nursery.) An art lover and an accomplished photographer whose camera skills developed in tandem with his growing horticultural expertise over the years, he will give a five-minute video presentation on agaves as art, using images he shot himself.

“What these photos are highlighting is the amazing colors that agaves (Agave franzosinii, left; Agave bovicornuta, right) sometimes take on when they come into flower at the ends of their lives,” explained Kemble. “Just like a leaf in autumn, the chlorophyll begins to break down in the leaf, and this allows other pigments to show themselves, revealing colors that did not show up when the green chlorophyll was present.” (Photos courtesy of Brian Kemble)

Bartzen hopes to attract 500 attendees to the gala, noting it is a major fundraiser for the garden’s annual budget of a little over a million dollars, which is typically covered 60% by its operations — nursery sales, admission and workshop fees and annual contributions from members, whose numbers swelled by 50% to 2,800 last year after the opening of a new 5,000-foot Visitor Education Center.

Making Kemble the star of the gala, she says, was in lieu of the big surprise party they were planning to throw him in March, which was jettisoned when the Bay Area went into shutdown mode. She has worked closely with him since 2012 and says he was a joy to get to know.

“He’s brilliant, but you know he’s the sweetest, kindest, most generous, funny, educated — I describe him when I have to introduce him as one of the Renaissance men.”

His impact on the garden, over 40 years, has been almost immeasurable.

“He just took Ruth’s experimentation and multiplied it with his energy and his efforts,” said Bartzen. “Most of the plants in the garden he planted or propagated or hybridized or traveled to buy or was given. He spends a lot of his time communicating with plant people all over the world, and they share seeds, and they share ideas, and they share their experiments and find out what is working. So it’s one giant scientific experiment at the garden, and he is the maestro behind it!”