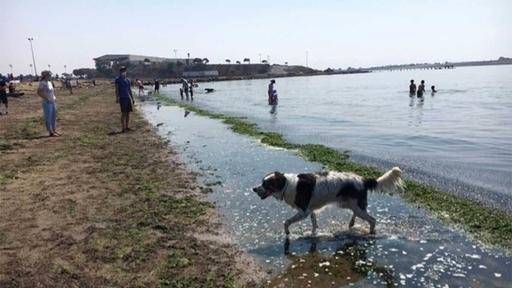 Bay Area residents flocked to beaches over Labor Day weekend, including Albany Beach in Albany near the Golden Gate Fields racetrack, to escape the heat wave. (Photos by Janis Mara)

Chico the Chihuahua playfully charged a towering Rottweiler at Albany Beach behind Golden Gate Fields in Albany on Saturday, one of many Bay Area residents seeking relief from the Labor Day weekend heat.

With temperatures soaring above 100 in some cities, people and their animal companions sought refuge in parks and the Bay Area beaches that remained open. The smoky air from local wildfires and heat wave on top of the pandemic have dealt the Bay Area a triple whammy.

“We’ve been cooped up all week. I had to get out and get the little guy some exercise and feel like a normal person,” said Ally Marshall of Albany as she kept a watchful eye on Chico and her other Chihuahua, Kai.

Referring to the combination of COVID-19, devastating local wildfires and broiling heat, Marshall said, “I think ‘2020’ is going to become an obscenity. As in, ‘How are you doing?’ ‘2020.’ ‘Say no more.’”

The beach and park located off the Bay Trail behind the racetrack were even more crowded than usual around noon Saturday. Every parking space and picnic table was taken, with cars circling in search of a spot.

A woman standing up on a robin’s-egg-blue kayak paddled parallel to the shore, which was dotted with blue, red and yellow beach umbrellas. Cyclists, moms and dads with strollers and a doggie cast of thousands frolicked at the beach and on the open land with the San Francisco skyline in the background.

Masks were ubiquitous, and other than family and friendship groups, most people seemed to be observing social distancing.

“I went swimming. The water was wonderful,” said David Wampler of Berkeley, who jogged to the park from his Berkeley home with his dog Gemma.

“She’s a COVID-19 dog. We adopted her three months ago to keep us company during the lockdown,” said his wife Victoria Eisen.

“The pandemic has been tragic in some ways, but in others it has brought opportunities,” Eisen said, referring to the adoption.

Saturday’s heat was ferocious, hitting 101 degrees in Concord and 98 degrees in Antioch during the afternoon, but the breeze coming off the water kept things cool at Albany Beach.

Luckily, many East Bay Regional Parks remained open through the weekend, though several beaches, including Point Reyes National Seashore, were closed to help deter the spread of COVID-19. Lake Berryessa Recreation Area was closed due to wildfire.

Clambering down the rocks and plunging into the water at Point Isabel, King the German shepherd mix was clearly having the time of his life. King and Nala, a boxer mix, accompanied their human Vanessa Bruning to the 23-acre dog park at the west end of Central Avenue in Richmond.

“It’s 102 degrees in Dublin and the dogs needed to have some fun,” said the Dublin resident, whose T-shirt read, “Be nice. Drink wine. Pet dogs.”

Summing up, Bruning said 2020 “has been OK for me — but I think we’re all ready to put up our Christmas trees and call it a year.”