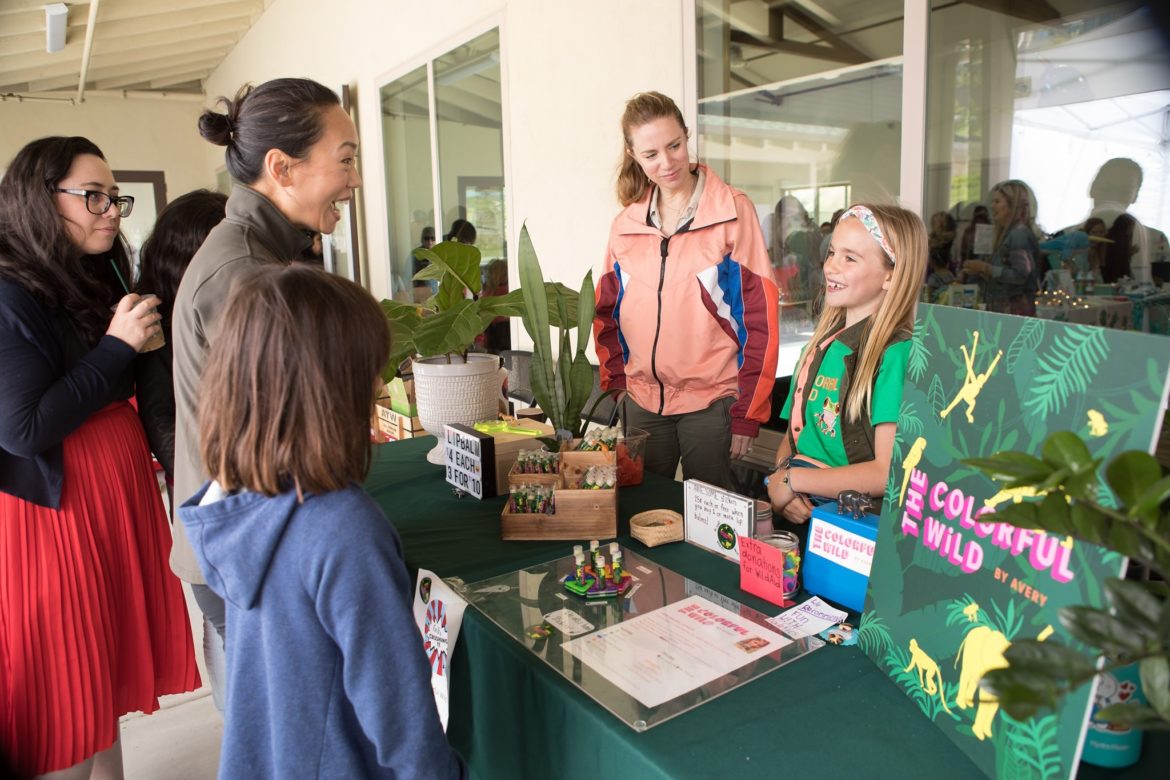 What started as a pop-up stand at a farmers market turned into the nonprofit Girls Crushing It, an organization that supports young girls' entrepreneurial endeavors. (Photos courtesy of Girls Crushing It)

It started with origami.

After years working in public relations in Texas, Ohio and North Carolina, Roxanne Christophe and her family relocated to the Bay Area in 2018. Post move, her two daughters developed a love for origami, so much so that they started pitching their creations to local farmers markets. The girls, both preteens, were handling business negotiations with a ferocity that rivaled the show “Shark Tank.” They both now run their own businesses, in 3D printing and confections, thanks to their origami earnings.

“It was eye opening how much their confidence grew pitching their products,” recalled Christophe. “They were bitten by the entrepreneur bug.”

When Christophe realized there were plenty of entrepreneurially minded girls with ideas but nowhere to nurture them into viable businesses, she made space for them by posting in a local Facebook group about organizing a neighborhood market for local kids and their ideas.

More than 400 people showed up to the “pop-up shop” to buy wares from dozens of adolescent entrepreneurs. The growth from a household venture into a nonprofit, according to Christophe, was “really, very organic” — and so Girls Crushing It was born.

“There was a demand for this service, and there was a real willingness on the part of the community to come out and buy those products,” Christophe said.

Since its inception, Girls Crushing It (GCI) has enabled more than 500 girls, ages eight to 18, to gain important business acumen to pursue their own ventures. Before the wrench that is COVID-19 was thrown into their plans, GCI was operating weekend workshops for their budding business ladies. They had a partnership with the San Francisco-based Google community space where girls had access to Chromebooks and could attend panels with Bay Area-based CEOs. And the pop ups brought in thousands of potential customers with GCI participants selling everything from bath and body products, jewelry and  succulents to 3D-printed fidget cubes, dog biscuits, clothing, toys and henna kits.

Jada Jackson, one of the program’s first pupils, just turned 12 but she’s been a businesswoman since the first grade. Before her school work intervened, Jackson made rainbow bracelets to sell to her fellow students and gave the earnings to her local animal shelter. (Jackson’s mother knew Christophe, who had reached out about the first session for Girls Crushing It.) The successful young lady now runs her own hair accessory business, J Alexandria’s Bowtique, and sells headbands, bows, hair clips and, most recently, face masks.

“We wanted to encourage this [business] spirit as much as we could,” said Jackson’s mother Dawn Porter. “For me it’s been so rewarding because it’s helped evolve something that’s already part of her DNA.”

The program has continued through quarantine, but with an adjusted focus.

“We talk about: Is your product still relevant in COVID? Do you need to adjust your product or have to come up with a new one?” said Christophe of the program’s shift. “Number one is they want to go through the product development process, something they designed and put their stamp on.”

The transition from in-person to virtual training has been pretty smooth. With live learning is off the table, GCI took its sessions to Zoom with a little help from the San Francisco-based nonprofit Nasdaq Entrepreneurial Center. In conjunction with the center, GCI hosted two summer camp sessions, averaging 13 girls per camp, to address how the pandemic affects their businesses and experiment with a virtual workflow moving forward.

Jada — who was one of the Nasdaq campers this summer — had to adjust from her usual pop-up shops to an online platform, and launched a store on Etsy.

“It’s really cool to see how I can make marketing [material] and organize my shop. I can be flexible when I make orders and ship stuff out,” said Jackson excitedly. “We were supposed to partner with local businesses in Lafayette before the pandemic. I definitely want to do partnerships in the future.”

A silver lining to the transition to virtual is the ability to reach girls beyond the Bay Area, and to expedite their vision for national expansion.

“Our ultimate vision is national chapters across the U.S. where girls are empowered through our support to establish local education with local business leaders,” said Christophe. “There’s no one out there that’s doing this unique take of attracting girls at this fragile time in their development and resonates with them so strongly.”