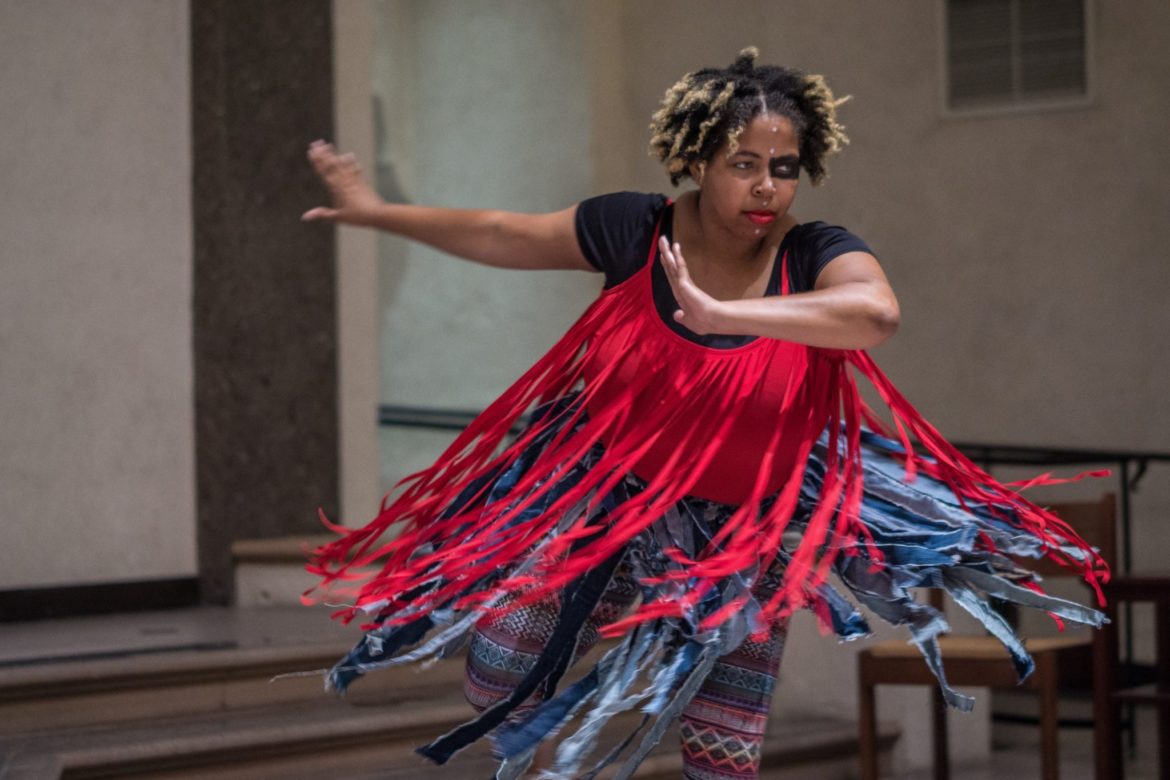 After being cooped up indoors as much as possible, Bay Area residents are suffering intense cabin fever. Even though the smoke has cleared up (for now), the 6-month-old COVID-19 pandemic still means going out can be a huge risk. Fortunately, veteran director and producer Erin Merritt and technical facilitator Dani Bae have worked out a way to safely put on live arts for vehicle-bound audiences.

Last Saturday marked the beginning of the first episode of Merritt and Bae’s “Neighborhood Stories” series, which will continue to highlight local artists at sites around Oakland. For six afternoons over three weekends, ticket holders in cars, trucks and SUVs can take a tour of seven different kinds of short live performances, set at different outdoor locales in the city, including music, theater, dance, and on the first two weekends, a Balinese act put on by members of Gamelan Sekar Jaya. Only three cars are allowed to attend a performance at the same time.

The show is kid-friendly, and themes range from “queer love songs” to “an outcry against police violence toward Black women.” While Episode 2, which will be set in El Cerrito and Richmond, includes some local history, Merritt says this first show is all about the present moment we’re in — touching on experiences of the pandemic, the Black Lives Matter movement, and the wildfires impacting the entire West Coast. “And some of the pieces are just there to be lovely,” Merritt said. “Not that the others aren’t beautifully done. They are. But some of the pieces will soothe your soul, and some of them will roil it up a little bit.”

It’s also about the legacy of specific neighborhoods where artists live and love their communities.

The “Neighborhood Stories” website offers a handful of Oakland facts to put the tour into context. For example, “Like much of the East Bay, what we now call Oakland overlies the unceded ancestral homeland of the Chochenyo Ohlone people, now organized under the Muwekma Ohlone Tribe.” And, “Despite gentrification, Oakland is consistently in the top 10 most ethnically diverse cities, with over 125 languages spoken here and one of — if not the — highest percentage of artists nationwide.”

Merritt, who’s lived in the Bay Area since she was 9 years old, says the less you know about the actual show the better; she recommends you take it as it comes and let it surprise you. I spoke with her on the phone about how the series came together and how exactly it works.

How did “Neighborhood Stories” come about?

Erin Merritt: I think everything I do comes from a whole bunch of different directions all at once. The most obvious is that I’m a theater-maker, a producer and director. I am not satisfied with producing work that has to compromise at all. But I also love limitations in a way, because it forces you to think about something anew.

I’m one of the founders of the Bay Area Women’s Theatre Festival. The piece I was producing for the upcoming festival was “a thousand people in one theater for 24 hours” kind of thing — exactly the opposite of what can be done right now. So if we can’t have large groups of people, what can we do right now? That was the theatrical impulse.

I thought, “Right now, we are all still connected, but we don’t feel like we are.” Part of what’s missing is that connection you get through live performances. What could we do with something like that?

Another component is that artists are part of every community. We live in every neighborhood, and other people aren’t always aware of that. When they think of being entertained, they think of some mythical people who live in Hollywood, maybe. And they don’t think of us as working people. We are working-class people — and we are very, very vulnerable financially, even in the best of times.

Art is valuable; it’s part of what makes a place worth living. Artists are carrying the culture, and we’re in a position to respond to the immediacy of what’s happening in a way that helps the community feel united and feel like it can manage and move forward. We’re essential workers. We need to make art right now that can connect people in a way that only art can do.

Can you explain how the “Neighborhood Stories” show works?

Merritt: From the audience’s perspective, they pick a start time, and they show up in their car with as many people in their quarantine pod as they want packed into it. It’s one price per car, so the more people you bring, the cheaper it is for you.

We can only accommodate three cars at any given location at any time. So three cars start, and later, three more cars start. There is an order to the show. We give you the first location, and you go and you watch a short performance — most of them are running about 8 minutes. Then, when it’s done, that performer gives you the next location.

When I was a little kid living in L.A., the Girl Scouts used to do this thing they called a Magical Mystery Tour. You were told to wear comfortable shoes and bring a bag lunch. You’d get on the bus at 8 a.m., and it would drop you back at 5 p.m. The troop leaders would take you to five or six places over the course of a day, and you did not know where you were going.

I loved that. It was the most fun, because you’re like, “I trust them to take me somewhere interesting, and if I don’t like the place I am now, I’m going to be somewhere else in an hour.” There was a great sense of anticipation and curiosity that went into that.

I feel like that’s a great way to watch and encounter art. We do have on our website who the performers are, but I almost recommend that people don’t look before the show. There’s something in there for everybody. I would choose to go see all the actors. I never have time to see dancers or musicians because all of my focus is on theater. When I do get to see other kinds of artists I’m like, “Oh, yeah, right, I love that art form!”

With our show, it almost doesn’t matter who they are, because they’re all really great. Some of them, like Gamelan Sekar Jaya, are internationally touring performers and local experts on a very particular art form. Some of them are less-well-known hidden gems who only work locally on purpose. As the audience, you don’t know what you’re going to see. Over the course of less than two hours, you go to seven different locations, and each location is a totally different site, totally different view, totally different type of performance.

We’ve chosen artist sites that either speak to the piece that they’re doing, or they’ve written the piece for that site, or it’s a place that’s very comfortable to them. Some of the performances actually reference the place that they’re in. It’s a way to integrate art and a neighborhood. You might sign up because you know one musician, but by the end of it, you know six other performers you’ve never heard of before. Then, you can get on their mailing list or buy their album or take their classes.

I know you want to keep the mystery, but can you tell me a little about the content?

Merritt: Maybe you should say: Spoiler alert! Don’t read below if you don’t want to know more.

One of them is written by an amazing rising actor who was an Oakland School for the Arts student and now is a Laney College student who’s written about what it’s like to date as a teenager in the pandemic, and it’s hilarious. The other acted piece is this gorgeous ode to the neighborhood it’s in. It’s about being an organism living in an ecosystem. Part of the question is, “When you’re here, do you know where here is? What is it actually like for the residents? What is really happening here? What’s growing here?”

I want us to be aware of the longevity of this space. We’re living in one very particular time, that we’re aware of it being a historical era because so many insane, once-in-a-lifetime things are happening. Right now, what I’m seeing is smoke in the air and people hiding in their houses, and yesterday — by which I mean last year — it was blue skies, and everyone was out at the beach. A hundred years ago at this time, there was also a pandemic here, and people were hiding in their houses. I’m trying to get people to see those overlays. Even just thinking back to what business used to be in this spot where we’re standing now — which was maybe even open six months ago and now will never open again.