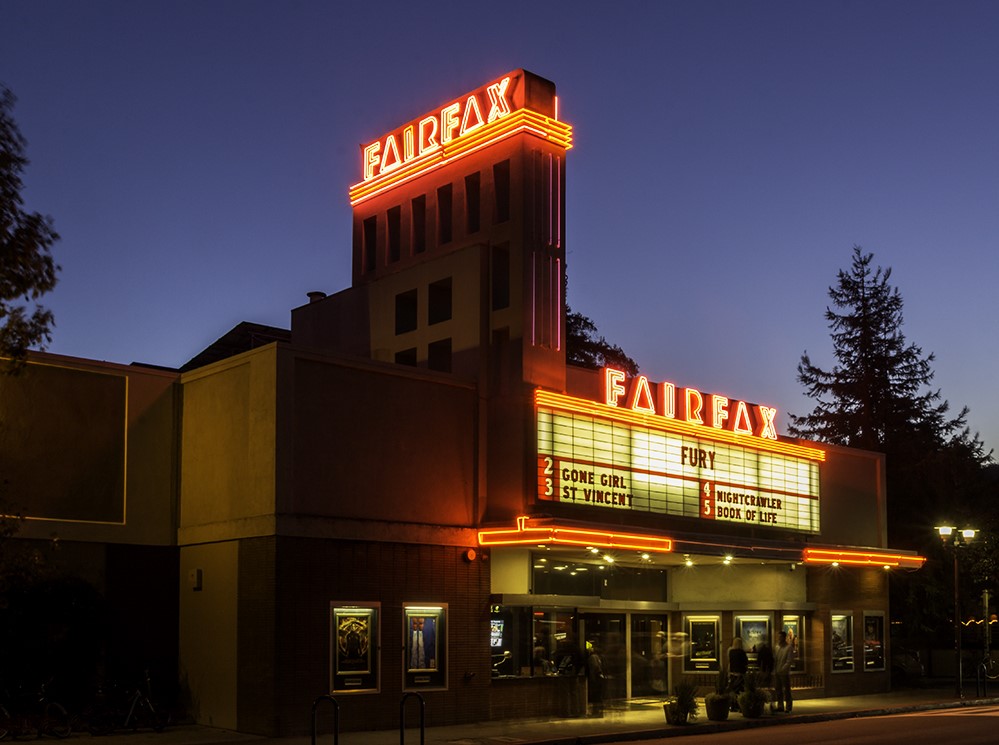 Missing the big screen? Slowly, movie theaters are reopening in some corners of the Bay Area, as a few counties graduate into a less restrictive tier of Gov. Gavin Newsom’s COVID-19 business reopening plan.

In Napa, the Century Napa Valley and XD opened its doors again on Sept. 11 after more than six months in the dark. “We had some really avid moviegoers who were excited to be off the couch and back in the theater,” said Chanda Brashears, vice president of investor and public relations at Cinemark, the giant movie theater chain that owns the Napa movie house and more than 25 others in the nine-county Bay Area.

Further up the Napa Valley, the independently owned Cameo Cinema in St. Helena is preparing to open Friday. The single-screen theater will have, among other safety measures in place, limited seating and one show daily instead of three as it did in the pre-COVID era.

The Cameo and the 12-screen Century were permitted to open because Napa County — based on metrics measuring the spread of COVID-19 — was moved to the red level, the third of four color-coded tiers that govern what California businesses can reopen and under what restrictions.

For movie theaters, red means they can reopen but can only fill their auditoriums to 25 percent capacity or 100 people, whichever is fewer. Other health safety protocols that Cinemark has put into place include automatic distancing — once tickets are purchased two seats immediately to the left and right are blocked from sale, and unless the theater has reclining seats, tickets are sold only in every other row.

Face masks and gloves are required for all employees, auditoriums are sanitized after each show, and moviegoers are required to wear masks, among other safety measures.

On Tuesday, state public health officials announced that Marin County would be moved from purple, the fourth and most restrictive tier, to red. Cinemark is moving quickly to take advantage, with plans to open the San Rafael Northgate 15 on Friday. Beside the Northgate, Cinemark theaters in Larkspur, Novato and Mill Valley are to open soon as well, according to Brashears. She said the company wasn’t ready to provide an opening date. The six-screen Fairfax Theatre in Fairfax, owned by Petaluma-based Cinema West, which owns 14 Bay Area theaters, will also open Friday.

Like most theaters, it will be following what have been dubbed CinemaSafe health and safety protocols developed by the movie theater industry in consultation with independent epidemiologists, said Dave Corkill, Cinema West CEO. “I think the plan makes our businesses safer than many other so-called essential businesses like Walmart,” Corkill said.

Elsewhere in the Bay Area, though, San Francisco and Santa Clara, the only other regional counties to have moved from purple to red, are maintaining their own tighter restrictions — as state rules allow them to — and prohibiting movie theaters from opening. Officials in both counties said theaters are still considered indoor activities too risky to permit yet. “Additional services, businesses, and activities will resume over the coming weeks and months, as long as San Francisco continues to make progress on limiting the spread of COVID-19,” said a statement issued by the San Francisco COVID Command Center of the Department of Emergency Management in response to questions about movie theaters.

It’s possible that more Bay Area counties will before long reach the point where their movie theaters will be permitted to open their doors. At a Tuesday news conference, California Health and Human Services Secretary Dr. Mark Ghaly said, “We anticipate that there will be some movement of counties within these tiers next week.” In Sonoma County, a Monday adjustment in the methodology of tabulating data that reflects the spread of the novel coronavirus lowered transmission rates, nudging the county a bit closer from the purple to the red tier.

That’s good news for entertainment companies like Santa Rosa Cinemas, which was ready to open July 1 until the state’s COVID-19 transmission rates spiked and tougher business restrictions kicked back in. The revised numbers “made it a little more positive, for sure,” said Neil Pearlmutter, vice president of Santa Rosa Cinemas. The company is poised to open its four Sonoma County theaters as soon as the county moves to the next tier, Pearlmutter said, adding that it wouldn’t be soon enough.

Brashears of Cinemark declined to say whether the Century Napa Valley theater was selling out its permitted capacity. But she said, “We’ve been very pleased with the results and it’s very clear that there was a lot of pent up demand.”

For some theaters, though, things have moved too slowly and the change in tiers has come too late. In Marin County, the 58-year-old Tiburon Playhouse, owned by Cinema West since 1989, will not reopen its doors, Corkill said, a “tough” decision made just last week. “It’s unfortunate, but that’s the way it is,” said Corkill. “And we have a lot of other problems to manage, of course, trying to get our other theaters open.”