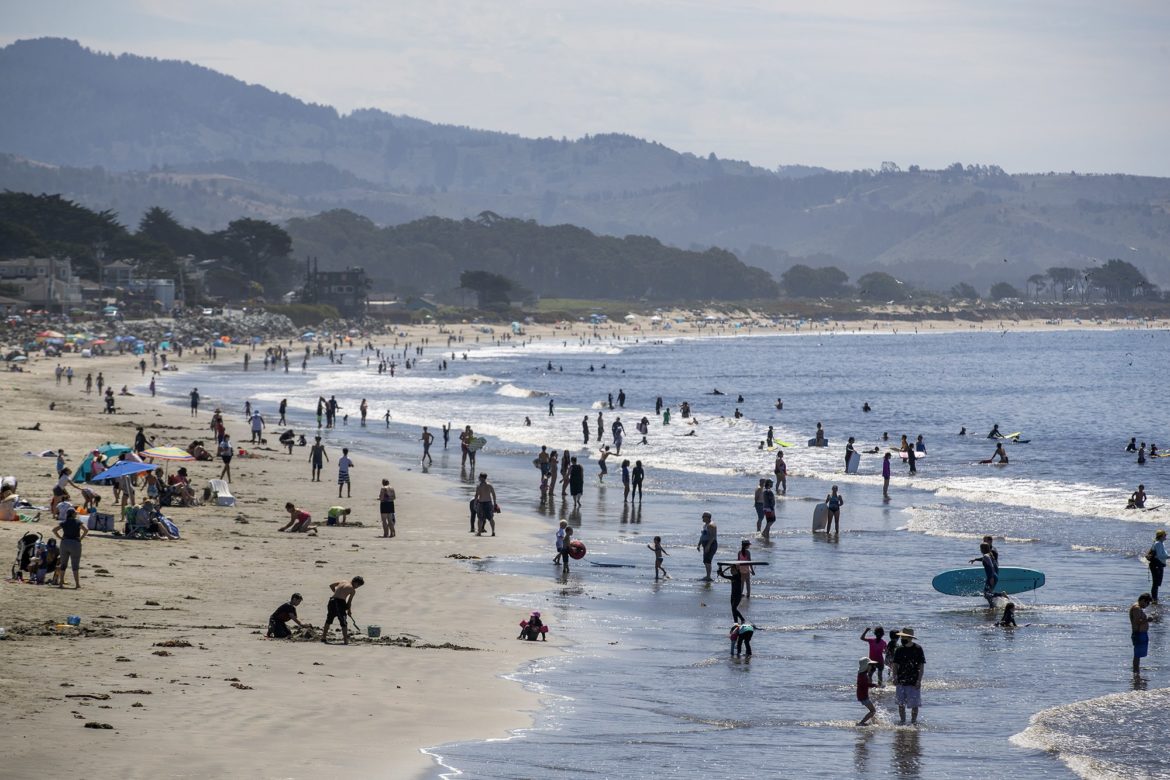 HALF MOON BAY, CA - AUGUST 15: Visitors enjoy the beach in Half Moon Bay, Calif., on Saturday, Aug. 15, 2020. A heat wave continues to bring high temperatures to much of the Bay Area. (Anda Chu/Bay Area News Group)

Another likely record-breaking heat wave is set to blanket California over Labor Day weekend — bringing with it the potential for more rolling blackouts.

The operator of California’s electrical grid on Thursday issued a statewide Flex Alert, warning that temperatures 10 to 20 degrees above normal Saturday through Monday could potentially cause an energy shortfall three weeks after the state instituted its first rolling blackouts in nearly two decades. Gov. Gavin Newsom on Thursday declared a state of emergency to free up additional energy capacity.

But there’s one bright spot of news: The triple-digit temperatures — which could soar to 116 degrees in some parts of the state — will likely only last a few days, whereas the last heat wave dragged on for much longer.

The intense heat could also exacerbate poor air quality in the Central Valley and the Bay Area, where firefighters are working to contain historic wildfires that have charred hundreds of thousands of acres.

Some beaches in the Bay Area and Southern California are closing for the holiday weekend amid concerns that crowds could contribute to the spread of coronavirus. Another 46 state parks remain closed due to coronavirus and fire danger.

The potential for more blackouts comes on the heels of the State Water Resources Control Board’s Tuesday vote to keep four natural-gas plants running, though they were supposed to be phased out by the end of the year to help California reach its goal of 100% renewable energy by 2045.

1. A census undercount among California’s wealthy

As wealthy Californians flee to vacation and secondary homes amid the pandemic and a shift to remote work, they aren’t turning in their census surveys — heightening fears of an undercount that could lead the Golden State to lose a seat in the U.S. House of Representatives along with billions of dollars in federal funding, CalMatters’ Nigel Duara reports. But although participation rates are down 20% compared to those from the 2010 census in wealthy enclaves like Malibu and Carmel-by-the-Sea, the undercount will hit poor communities that rely on social safety net programs hardest. It will also affect fast-growing inland regions, where hundreds of thousands of people have moved in search of affordable housing but resources haven’t yet followed. Further exacerbating the problem: the Trump administration’s decision to cut short the census period by four weeks.

At least eight workers have died amid a coronavirus outbreak at a Livingston Foster Farms plant that supplies between 50 and 60% of California’s chicken, the Fresno Bee’s Manuela Tobias reports in a CalMatters collaboration. Although the Merced County health department ordered the plant to shut down last week, the order was stayed until Tuesday evening following intervention from the federal government. The facility has since sent about 1,400 of its roughly 3,700 workers home with pay through at least Monday, though other portions of the complex remain open. The county’s shutdown order followed the company’s repeated failure to comply with guidance to curb the outbreak, including significant changes to employee break spaces and widespread testing. Foster Farms said it has complied with guidelines from the Centers for Disease Control and Prevention since March, and will test all employees twice during the shutdown.

3. The Wild West of reopening schools

If you’re curious how much money it would cost to reopen schools under California’s new public health guidelines, consider this: The state spent $53 million on a 60-day supply of protective equipment for 1,037 school districts, CalMatters’ Ricardo Cano and Ana Ibarra report. That includes:

As high demand for supplies drives up costs and attracts sketchy vendors, school leaders are calling on the federal government for more funding.

Also feeling the heat: California’s beleaguered unemployment department, which has once more come under fire amid reports of dozens of fraudulent claims — even as another 1 million remain backlogged. Lawmakers approved an emergency audit of the department Thursday, a day after the Employment Development Department said it had launched an investigation into potential fraud. That announcement came on the heels of a Monday floor session in which lawmakers rattled off stories from their constituents: One received 116 letters from the department addressed to 33 people; another received 74 letters addressed to 24 people. A man living in Florida received 13 letters, while another man’s EDD account was hacked and nearly $15,000 paid to an unknown person. (It’s worth pointing out that Republican lawmakers had asked for an audit in June, but consideration of the request was delayed.)

The news comes as weekly unemployment claims continue to rise in California, even as they drop nationally. Californians filed nearly 237,000 new claims in the week ending Aug. 29, accounting for 27% of claims filed nationally. More than 8 million Californians have filed initial claims since March.