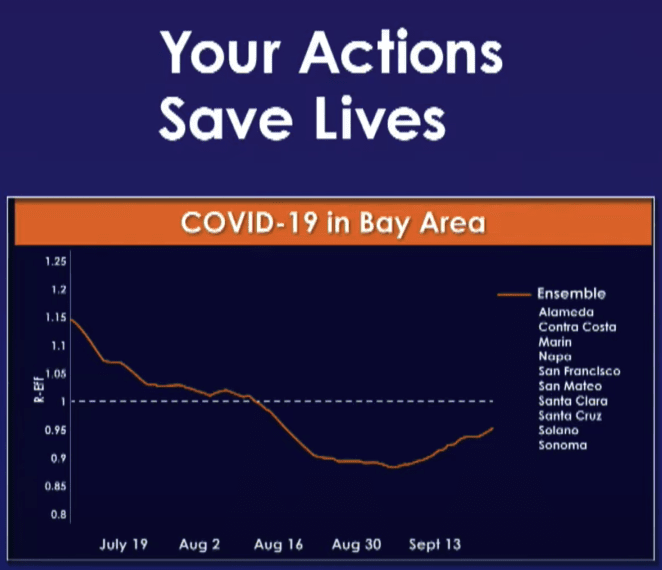 While California’s rate of new coronavirus cases is at its lowest point in months, the likelihood of the virus resurging has increased in recent weeks in the state’s largest metro areas, Gov. Gavin Newsom said Monday.

The state’s average daily positivity rate over the last 14 days is now at 2.8 percent, Newsom said, down from 3.6 percent on Sept. 14.

Coronavirus-related hospitalizations and intensive care unit admissions have also continued to decline in recent weeks, both by around 20 percent over the last 14 days.

That trend of reduced viral spread has resulted in more than a dozen counties across the state, including several in the Bay Area, moving out of the state’s most restrictive reopening tier since the state switched to the color-coded tier system on Aug. 31.

Newsom, however, echoed state Health and Human Services Secretary Dr. Mark Ghaly’s recent warning that there are reasons to believe the virus may begin spreading exponentially once again.

“While it’s true we have seen a three-fold decrease in the total number of cases since our peak in mid-July, we are seeing early signs that those decreases are beginning to slow down, they’re beginning to plateau,” Newsom said.

The virus’ effective reproduction number, which measures how many people can be infected at any given time, hit its nadir in the Bay Area and Southern California in late August and early September, according to Newsom, and has been trending upward since.

Once that reproduction number, measured as R effective, is higher than one, exponential spread of the virus is likely to occur.

In the greater Bay Area, with the exception of Monterey County, the rate dipped below one in mid-August and fell as low as 0.9 before rising back up to around 0.95 as of Monday.

While there is still time for the state to curb the potential growth in cases, Newsom said, Californians will have to be cautious to avoid spurring a second large wave of cases, particularly in tandem with the seasonal flu.

“We have once again tamed the growth of transmission rate in the state of California,” Newsom said.

“But this R effective rate is a point of caution and consideration as it relates to the work that each and every one of us must do to continue to see a decrease, not just a plateauing of transmission rates.”