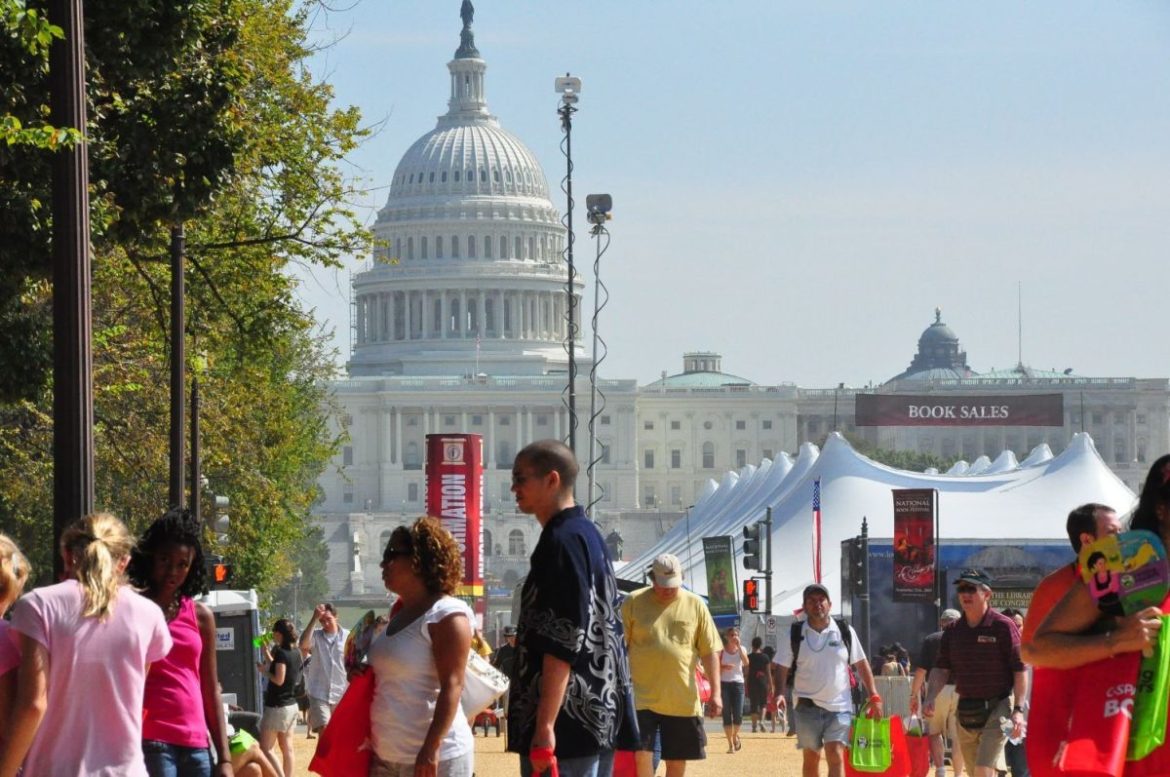 2010 National Book Festival at the National Mall. (Photo courtesy of the Library of Congress)

Registration is now OPEN for the 20th annual Library of Congress National Book Festival, to be held online Sept. 25-27.

The Library of Congress National Book Festival, co-founded in 2001 by first lady Laura Bush, a former librarian, and National Librarian James H. Billington, first threw open its doors on the East Lawn of the U.S. Capitol, then moved to the National Mall for 12 years before taking root in the Washington Convention Center in 2014.

Now, for its 20th year, the annual bibliopalooza is moving exclusively to your digital screens – and that’s not necessarily a bad thing. The 2020 National Book Festival, having expanded from an audience of 25,000 in its first year to 200,000 last year, will bring some 120 authors, poets and illustrators to virtual attendees from Sept. 25-27.

The advantages are multiple: no standing in crowded lines to get in to see a favorite author, no need to make yourself presentable for a public outing, no need to travel to (and park near!) a crowded venue and – perhaps best of all – no need to miss a single thing, because the presentations will include both live and view-on-demand opportunities and endure on the festival website and YouTube for long afterwards. It’s quite likely that as the festival enters its third decade, it will set eye-popping, record-high attendance levels.

Readers can access the events on the festival website across 10 “stages”: history and biography; understanding our world; fiction; genre fiction (speculative, sci-fi and fantasy); poetry and prose; family, food and field; science; children; and teens.

Or they can choose an alternative strategy by focusing on three timely themes festival organizers have developed: “Fearless Women” highlights books by or about strong girls and women, such as Clinton’s new book about young Olympic athletes and Erica Armstrong Dunbar’s biography of Harriet Tubman. “Hearing Black Voices,” offering writers such as “How to Be an Antiracist” author Ibram X. Kendi, showcases black authors across multiple genres for readers of all ages. The third theme, “Democracy in the 21st Century” assesses the current state of our union and will feature, among others, three political journalists, Peter Baker of the New York Times, Susan Glasser of The New Yorker and George Packer of The Atlantic analyzing how Washington, D.C., works.

The simplest approach of all, of course, is to check through the entire two-day schedule and sign yourself up for sessions with your favorite authors. Some of those events will be interactive, with opportunities for you to submit questions ahead of time.

For the first time, the National Book Festival is partnering with PBS to close the proceedings with a two-hour television special (6 p.m. EDT, but check local listings) on Sept. 27.

Hosted by “Today” show co-anchor Hoda Kotb and titled “The Library of Congress National Book Festival: Celebrating American Ingenuity,” it will feature many of the authors listed above, plus Oakland’s own graphic novelist, Gene Yuen Lang; National Book Award winning novelist James McBride; and Pulitzer Prize-winning historian Jon Meacham. Throughout the telecast, San Francisco author Amy Tan, historian Walter Isaacson and novelist Sandra Cisneros will comment on the “American ingenuity” theme and how it has guided us through both troubled and temperate times. The broadcast will remain available for on-demand streaming and through the PBS app.

These are just a few of the authors that will be taking part in the festival. For more information, visit the festival website.