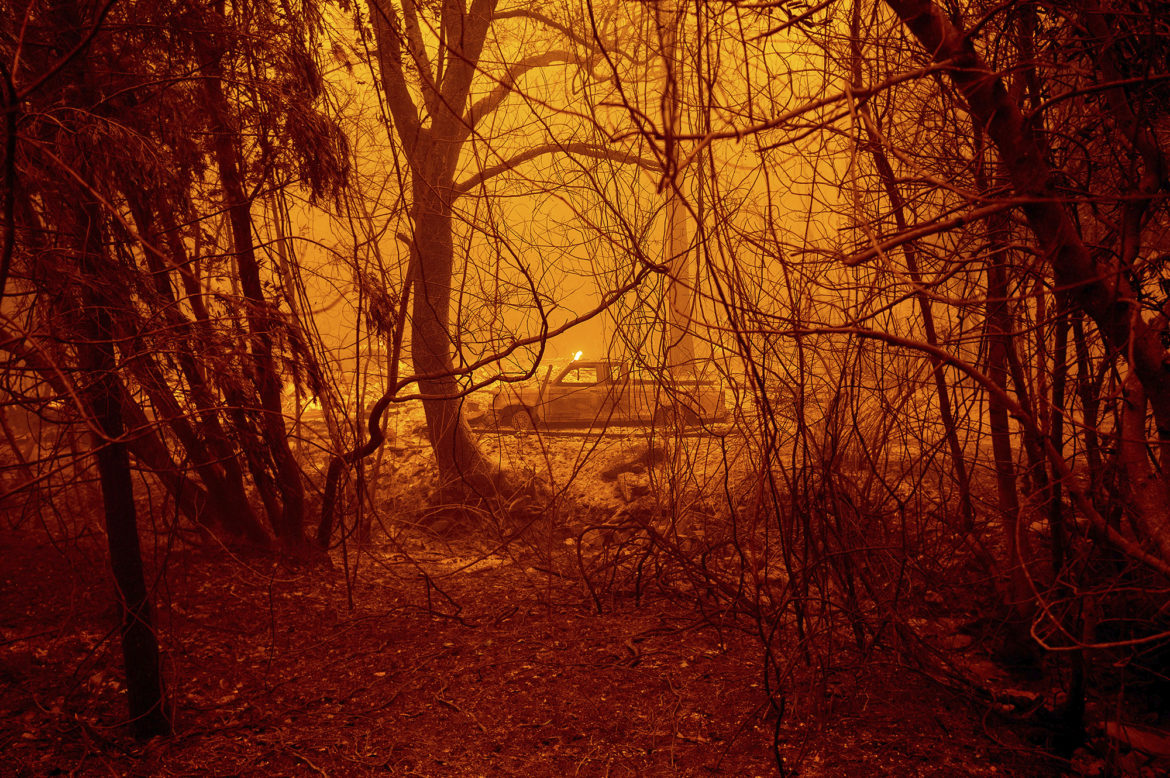 A scorched car rests in a clearing following the Bear Fire in Butte County, Calif., on Wednesday, Sept. 9, 2020. The blaze, part of the lightning-sparked North Complex, expanded at a critical rate of spread as winds buffeted the region. (AP Photo/Noah Berger)

Six of the 20 largest fires in state history

Wildfires have burned more than 3.1 million acres this year — an area approaching the size of Connecticut and the largest amount in California’s recorded history. Six of the 20 largest wildfires in state history are currently raging, including the August Complex Fire, which on Thursday claimed the No. 1 spot at more than 471,000 acres.

Powerful winds, a record-breaking heat wave and other conditions have propelled the fires to grow at unprecedented speeds, in some cases more than doubling in size in one day. The massive North Complex Fire mushroomed by 210,000 acres from Tuesday to Wednesday, skyrocketing to the 10th largest fire in California history.

California has seen nearly 7,700 fires so far this year, stretching firefighting crews thinner and thinner. On Thursday, around 14,000 firefighters were battling 29 major wildfires, compared to 25 earlier this week. The fires have killed 12 Californians and destroyed more than 3,900 structures. (To keep track of all the current blazes, check out the Los Angeles Times’ fire map.)

One piece of good news, especially after a foreboding day of ash-filled orange skies: More favorable weather conditions are forecasted over the weekend, including lower temperatures and weaker winds. This could help slow fires’ growth, while also giving exhausted firefighters a reprieve from triple-digit temperatures.

You’ve probably already gathered that the 2020 election is pretty complicated. Twelve propositions on thorny policy debates. Competitive races for U.S. Congress and the state Assembly and Senate. And an unfathomable amount of money.

For a deep dive on all of that, you have CalMatters’ Election Guide.

But for the fun stuff — the surprise polls, the campaign gaffes, the fiery debates and the mean tweets — you have something new: the Post It.

A few times a week, CalMatters political reporter Ben Christopher will share updates from the (socially distanced) campaign trail. Expect witty analysis of breaking news, data hits on the latest survey results or fundraising totals, and the occasional interactive feature. (Hint: There may be a crossword puzzle or two coming up.)

The Post It will pop up in this newsletter, so keep an eye out. And if you have a tip for Ben, email him at ben@calmatters.org.

As Election Day looms, GOP congressional hopefuls in California seem to have landed on a particular strategy: Remind voters that Democrats are in charge of California — and that life in California isn’t going too well at the moment. It’s an approach they’ve used before. Read more here.

2020 was supposed to be the year that California doubled down on housing production. But infighting among top Democratic lawmakers, coupled with the complications of the coronavirus pandemic, sunk a raft of major housing proposals — including a high-profile bill that would have forced single-family-only neighborhoods to allow duplexes, CalMatters’ Matt Levin reports. Despite a notable lack of opposition from the powerful interest groups that normally fight against high-density bills, the duplex proposal died minutes before the end of the legislative session amid squabbling between the Assembly and Senate leaders. Newsom and lawmakers have already pinpointed affordable housing production as a top priority in 2021. But thanks to the recession, there likely won’t be much money to set aside.

Speaking of the difficulty of building housing, the average cost of building a single unit of housing for the homeless in Los Angeles is now $531,000, according to an audit released Wednesday by the city controller, the Los Angeles Times reports. The audit also found that nearly four years after voters approved $1.2 billion in bonds to build homeless housing, only three projects have opened, construction hasn’t begun on 75% of planned units, and many projects may “never come to fruition.” The news came the same day the city council refused to give the Los Angeles Homeless Services Authority the majority of funds from a $97 million federal grant to rapidly rehouse homeless people until the agency can show it’s made progress with an initial $30 million payment.

California’s 2019 crime rate fell to the lowest level in recorded history after dropping 3% from the year before, according to a report released Wednesday from the Center on Juvenile and Criminal Justice. Overall, state crime rates dropped 12% from 2010 to 2019, with violent crimes decreasing by 5% and property crimes by 13%. (These numbers don’t take rape into account due to a 2014 definition change.)

The news comes as California voters in November will weigh in on a number of crime-related propositions, including one that would roll back portions of criminal justice reforms that accompanied declining crime rates.