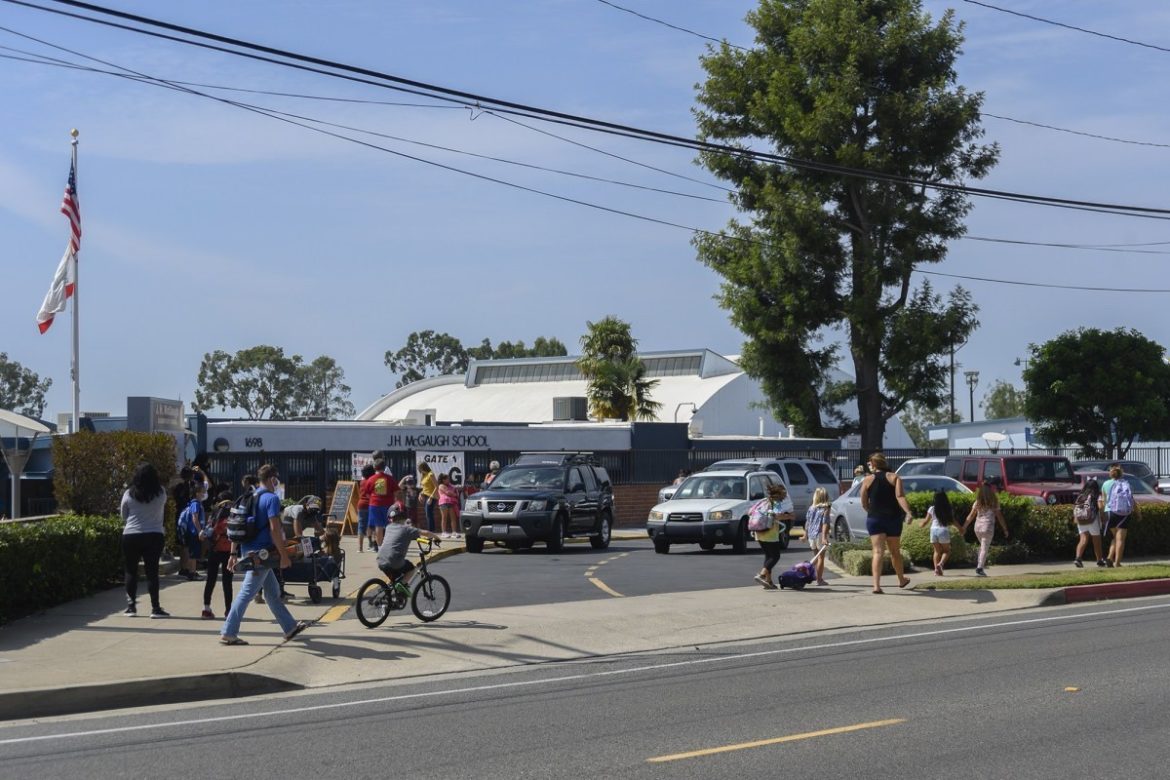 Parents and students mill around the McGaugh Elementary School parking lot in Los Alamitos during morning and afternoon changeover on Sept. 17. The Los Alamitos Unified School District has reopened its elementary schools for hybrid in-person instruction with students attending either morning or afternoon sessions in the classroom in addition to distance learning. (Photo by Tash Kimmell for CalMatters)

As schools throughout California tiptoe toward reopening, decisions about whether to routinely test teachers, staff and even students for the COVID-19 virus are proving controversial – and potentially costly.

In addition to prevention measures like mandatory masks, hand-washing and social distancing on campus, regular testing of school employees could help prevent new outbreaks if the virus is still circulating in the community, public health experts say.

In its guidance for schools, the U.S. Centers for Disease Control and Prevention said the usefulness of routine testing of school employees and students is unknown and declined to recommend it. But some U.S. lawmakers are investigating whether the CDC’s guidance was compromised by political interference from the Trump administration, which has pushed for schools to reopen quickly, the Washington Post reported.

California recently contracted with a Massachusetts diagnostics company to double the state’s COVID-19 testing capacity, allowing “our schools, not just to open, but to stay open and with some confidence,” California Health and Human Services Secretary Dr. Mark Ghaly said at a Sept. 15 news conference.

But so many questions remain: Should testing be mandatory for teachers and staffers to return to school? Should students be tested? What about school volunteers? Who will pay for the testing? How often should it take place, if at all?

“I think regular testing would make me feel a little bit safer, but only if it was part of a full set of precautions and only entered into at a point where community transmission was low enough,” said Sarah Ciccarello, who remotely teaches third grade at James Franklin Smith Elementary School in San Jose and is secretary of her local teachers union.

COVID-19 testing remains a contentious topic as public schools negotiate with teachers’ unions. In a strongly worded letter, the California Federation of Teachers demanded that state lawmakers ensure that school staff and students are regularly tested to prevent outbreaks. But some union representatives told CalMatters that some teachers are concerned about mandatory tests and their medical privacy.

“All we really want is to get back into the classroom and have things be normal again, but in the meantime we’ve got to do what it takes to keep our kids safe,” said Ciccarello, who recently tested negative for COVID-19 after experiencing respiratory symptoms.

Other states and large school districts have announced widespread COVID-19 testing programs for schools. Rhode Island has promised 5,000 tests daily just for school employees and students. Boston will test a rotating 5% of its unionized teachers each week. Minnesota is sending all private and public school employees a saliva test kit that they can use before returning to school, or save if they develop symptoms.

But the sheer scale of school surveillance testing in California is daunting. Some school districts serve more students than entire states. More than 6.1 million students attend more than 10,000 California public schools, taking classes from nearly 320,000 public school teachers. That doesn’t even include tens of thousands of other public school employees and employees of the state’s many private schools.

“Nobody has the money for this. Schools do not have money for it. And neither does the county,” said Napa County health officer Dr. Karen Smith, who served as California’s health officer from 2015 to 2019. “There’s a little bit of an impasse. It’s certainly making everyone nervous.”

In California, schools can reopen— or have reopened— in 11 counties, according to state reopening criteria. Schools in another 17 counties placed in California’s moderately restrictive “red tier,” including heavily populated Orange and San Diego counties, may reopen if their county’s COVID-19 transmission rates remain stable or decline over 14 days.

“Nobody has the money for this. Schools do not have money for it. And neither does the county.”

Health officers also approved 527 elementary schools, most of them private, to open for in-person instruction under local waivers.

Ever Flores, a Healdsburg High School counselor and teachers union president, said no testing provisions are included in the union’s temporary labor agreement with the Healdsburg Unified School District, where classes are still online. District officials did not believe it was their responsibility, said Flores who is also running for the school board in Santa Rosa, where he lives. The agreement, known as a memorandum of understanding, will be revisited soon. District officials did not immediately respond to a CalMatters request for comment.

“I don’t want to be responsible for infecting someone not knowing that I’m asymptomatically positive,” Flores said, noting that he and other school employees are sporadically getting their own COVID tests because they sometimes need to work on campus. “Having the ability to do (testing) once a week or every other week to make sure we’re all keeping each other safe would be ideal, mostly because we have an aging teaching staff. I’d hate for something to happen to anybody at risk.”

In Placer County, school officials in politically conservative Rocklin announced that they could not reopen campuses because the county health officials said there was not enough timely access to COVID-19 tests and results. Some parents were furious. The turmoil continued: After the county board of supervisors lifted the county’s state of emergency two weeks later, county health officer Dr. Aimee Sisson resigned in protest.

“There was a lot of finger-pointing” between school and county health officials, said Rocklin Teachers Professional Association President Travis Mougeotte, a high school history and geography teacher. He said some of the union’s members were concerned about testing only school staff and not students.

“We’re not doing anything if it compromises student or staff safety,” Mougeotte said. “The union’s stuck in the middle. The parents have turned on us … accusing the union of holding the kids hostage. The ugly side of the community has come out. I truly don’t believe it’s a majority, but they’re very loud.”

Earlier this week, the union filed a grievance against the Rocklin Unified School District alleging that the district had not implemented precautions it promised before reopening schools, including air filters in classrooms. In-person classes are supposed to start on Monday (Sept. 21).

In the meantime, the Placer County Office of Education has started to train health staff and set up COVID testing sites for school personnel.

State officials have suggested school staff tests be paid for by the employees’ health insurance. Although insurers are required under state emergency regulations to pay for COVID testing for these essential workers, there is no agreement on how frequently they should be required to pay for surveillance testing, and employees could be asked for co-pays.

The stakes couldn’t be higher. As schools have reopened across the nation, recent news reports of at least six teachers dying from COVID-19 have intensified fears of deadly new outbreaks originating on campus.

In California, more than 61,000 school-age children have been infected since the pandemic started, about 8% of all cases, even though schools were ordered to shut down in March. One Marin City school recently delayed its reopening for a week upon learning that a staff member tested positive for COVID-19 just days before students were to return.

San Jose Unified School District, with more than 30,000 students, cited concerns over the ability to pay for and provide enough COVID-19 testing among the reasons it chose to extend remote learning through December.

Orange County’s public health laboratory does not have the capacity to do surveillance testing for schools, and the load might strain even private labs, particularly during flu season, Marc Meulman, chief of operations for the county health agency’s public health services division, told CalMatters in an emailed statement.

Some school districts instead have turned to university health systems, with their sophisticated labs, for help.

“The parents have turned on us… accusing the union of holding the kids hostage. The ugly side of the community has come out. I truly don’t believe it’s a majority, but they’re very loud.”

Stanford Health Care is working with Bay Area school districts, including a district in Burlingame, to test school staff. And some of the university’s medical school faculty are consulting with the Los Angeles Unified School District, the second largest school district in the country.

Dr. Christina Kong, medical director of pathology at Stanford Health Care, told CalMatters the health system would use pooled testing, in which individuals’ samples are combined for testing, then retested if there is a positive result, to lower costs and speed results. School employees would be tested on a rotating basis so that everyone is tested once every two months, per state recommendations. The results would be reported to the employees and, if positive, to public health officials to begin contact tracing – but not to school administrators.

“What I’m surprised by is how many logistical hurdles schools have to go through to get testing,” Kong said. “I didn’t think it would be this complicated.”

In the San Diego region, hundreds of students and school employees in the Solana Beach School District received COVID-19 tests this week as the district’s elementary schools prepare to reopen for in-person learning on Monday. They’ll be tested periodically throughout the school year under the district’s new testing partnershipwith UC San Diego Health.

The coastal school district serving about 3,000 students estimates it will spend between $500,000 and $2 million on re-entry and surveillance testing this year. The district will use money from the federal Coronavirus Aid, Relief and Economic Security (CARES) Act to help with the costs, said Superintendent Jodee Brentlinger.

On a Facebook page for parents of Solana Beach students, Dr. Richard Sacks, a local physician who treats COVID-19 patients, admonished parents whom he said were “disputing the need to test, questioning the motives of the (district) and UCSD Health regarding this testing and even implying that they would not get their children tested.”

“Some testing is better than none,” Sacks wrote. “If the schools identify even one asymptomatic individual who tests positive, we would potentially avert unfettered spread of the virus throughout our school and disruptive shutdowns.”