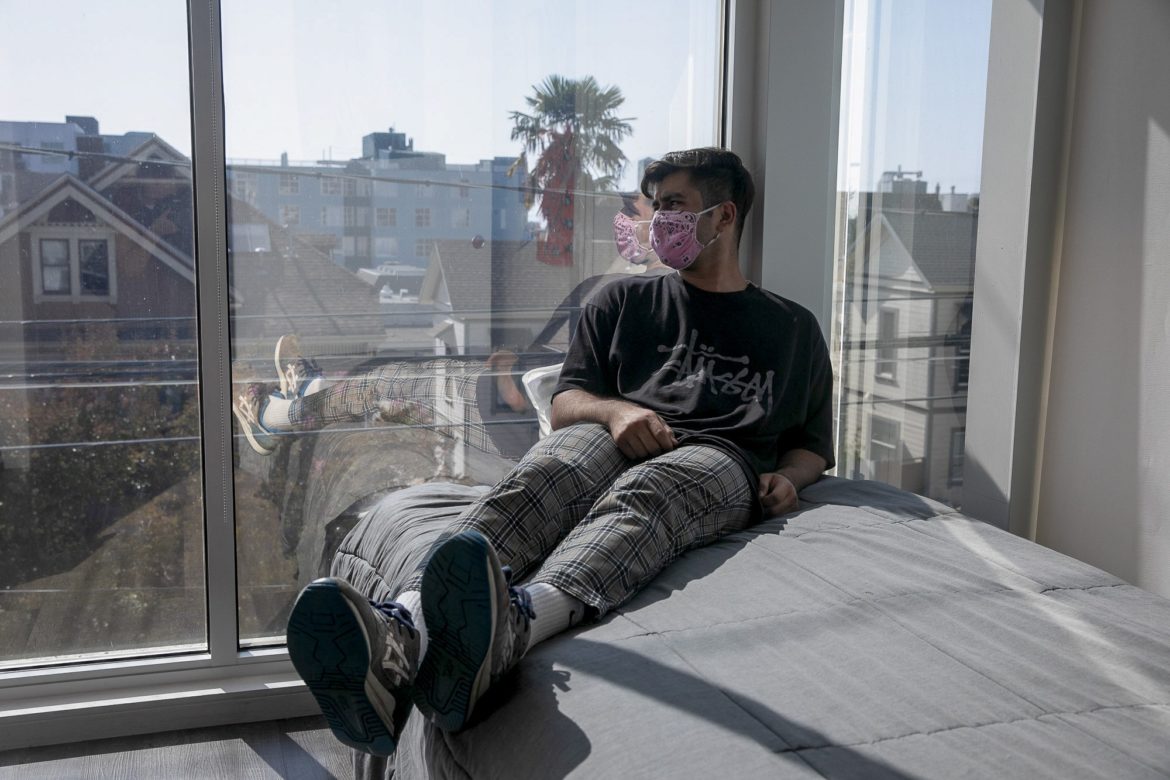 Isael Corona, a math major at UC Berkeley, looks out the window from his student apartment near campus where he lives with a roommate on Sept. 3, 2020. Photo by Anne Wernikoff for CalMatters

With sometimes competing public health guidelines coming from the CDC and state and local sources, colleges and universities have made different decisions about how much coronavirus testing should be done, and when. Resources are a factor, according to experts.

For several hours after coming back from the campus health center, Isael Corona’s nose was itchy and runny. He wasn’t sick, however. The UC Berkeley senior had just rubbed a cotton swab along the back of his nostrils as part of the university’s mandatory COVID-19 testing policy for students residing on campus.

“I think it’s pretty generous of them,” Corona said of Berkeley.

Like Berkeley, other University of California campuses are enforcing across-the-board testing for students living on campus, either during move-in or throughout the term. But that’s not the case at California State University, the nation’s largest four-year public university system, where only two campuses, Cal Maritime and Humboldt State, have tested all students living in dorms; only Maritime is testing students regularly throughout the term. Some CSU campuses are now seeing sizeable COVID-19 outbreaks, including Chico State, which late last month cancelled the few in-person classes they were holding and sent most students home, and San Diego State, where nearly 400 students have tested positive for the virus in the last two weeks and both dorm residents and nearby off-campus students are now under a stay-at-home order.

It’s an indication of the disparities in coronavirus testing policies that exist among California colleges and universities — differences driven at least in part by campuses’ varying financial resources and access to testing equipment. The UC system, which is doing across-the-board testing for dorm-dwelling students on all of its campuses, has a budget roughly four times that of the CSU system.

While UC and Cal State have pushed nearly all of their classes online and limited the number of students who can return to live on campus, tens of thousands of students will still reside in university housing this fall, either because they’ve enrolled in one of a small number of in-person courses or don’t have other housing options.

Crafting a campus coronavirus testing policy is complicated, said Dr. Sarah Van Orman, the student health director at University of Southern California and a member of the American College Health Association’s COVID task force. Universities need to take into account how many people can freely go to and from campus, the prevalence of the virus in the surrounding community, the sensitivity of the tests being used, and the behavior of campus residents, she said.

The federal Centers for Disease Control and Prevention have recommended against across-the-board testing for asymptomatic people, but that guidance has been widely pilloried by public health experts, including the former director of the National Institutes of Health. “The CDC’s decision not to recommend such testing for higher education is inexplicable and irresponsible,” wrote a prominent biology professor at the University of Washington, Carl T. Bergstrom, in July.

Cal State has cited the CDC guidance as a reason for not mandating testing policies at its campuses. Luoluo Hong, the system’s vice chancellor for student affairs, said at a recent CalMatters town hall that campuses who can afford it should test. “If campuses have the resources, we certainly encourage them to do it,” she said.

Twelve of the 23 Cal State campuses say they don’t offer any testing on campus, leaving students to seek results at county or private testing sites, which are sometimes more than two miles from campus.

Chico State has been trying to acquire testing material for COVID-19 since March, its health services director, Juanita Mottley said, but to no avail. The university does not have an on-campus testing site.

Cal State Channel Islands, near Oxnard, intended to test its 200 returning students in the fall, said Cindy Derrico, the university’s associate vice president for student affairs. But its local public health agency, Ventura County Public Health, recommended scrapping the idea because of long delays with COVID-19 test results and to instead ask students to report any symptoms using an app.

The challenges contrast sharply with the testing available to students at some wealthy private universities with their own medical centers.

The University of Southern California is testing all 350 undergraduates living in its dorms every week, and also doing surveillance testing of students living off-campus, conducting a total of 9,000 surveillance tests in August, Van Orman said.

At Stanford University, where an estimated 6,300 students are returning to campus for the fall quarter, all students living in on- or off-campus university housing are required to test weekly, said spokesperson E.J. Miranda. Students can also be tested up to twice a week if they request it, Miranda said in an email.

A recent study by a team of Yale public health researchers found that colleges that test all students for coronavirus every two days and isolate those infected would have the best chance of containing the virus. The team ran computer simulations of viral spread in a hypothetical campus of 5,000 students. Following those precautions yielded only about 200 infections by the end of the semester. If the campus only tested and tracked students with symptoms, by contrast, nearly all of the students were infected.

“We looked at thousands of scenarios and we didn’t find even one circumstance under which it would be enough to contain an epidemic to just monitor for symptoms,” said the study’s author, A. David Paltiel. “Silent spreading is just too common.”

Asking students to fill out wellness forms reporting their symptoms, as many Cal State campuses are doing, has limited effectiveness, Paltiel and other public health experts said. Many students may be asymptomatic, Bergstrom, the University of Washington biologist, said. Others may blow off mild symptoms.

Paltiel acknowledged that mandatory testing every two days could be cost-prohibitive for some public universities. But, he said, “If you can’t afford it, maybe you should ask yourself if you should be opening your campus.”

Most Cal States have fewer than 1,000 students living on campus this fall, according to a CalMatters review of CSU housing plans. That may help the campuses get away with not having across-the-board testing, said Bergstrom. But that advantage goes out the window if dorm dwellers start mixing with students living off-campus, Paltiel and Bergstrom said.

“They’re going to the same parties, they’re going off campus and doing Jell-O shots in somebody’s basement, they’re up in each other’s grills 150 at a time with no mask on,” said Paltiel. Treating the on-campus and off-campus populations differently, he said, then becomes “like trying to create a no peeing section in a swimming pool.”

Some of the Cal State campuses — including Cal Poly San Luis Obispo and Cal State Fresno — offer on demand testing, but it hasn’t headed off outbreaks like the one at San Diego State.

“I didn’t think that the outbreak would happen this fast, but I’m not at all surprised that it did happen,” said senior Jon Soden, a 21-year-old finance major living two blocks from the SDSU campus in a six-person house. He’s heard of student parties of 10 or 20 people happening off campus in the past few weeks, and was invited to one himself, but said he didn’t go. (Other news outlets reported seeing large student gatherings.)

The campus health center offers voluntary testing free of charge, but it’s by appointment only and closed on weekends. Soden said a friend of his who sought a test after possible coronavirus exposure never got a call back.

At a press conference last Friday, university President Adela de la Torre said SDSU isn’t mandating testing because “you can have 97% of negative results of your student population and that can change within a couple of days. And so what’s more important is having the testing available so that students can come and be tested.”

Chico State freshman Abril Ríos said she panicked when she learned the campus was shutting down after COVID-19 cases spiked. She thought her studies would suffer if she returned home, where she shares a bedroom with her two sisters who are also in college.

“I do think the university should have thought of testing students before they arrived, or at least been more on top of knowing an outbreak was possible,” Ríos said. “Even with a plan the chancellor approved, things failed.”

Ultimately, she submitted a hardship application and was allowed to stay in her dorm, she said, but other students in her situation were not as lucky.

Not all Chico State students were critical of the lack of testing, however.

“I think we’re all adults now who live on our own and it should be our responsibility to monitor ourselves and not put others in harm’s way,” said Aaron Minkoff, a freshman who moved back to his hometown of Long Beach when dorms shut down.

While the University of California gave campuses flexibility to determine their own testing plans, all campuses ended up opting for some kind of surveillance testing of students without symptoms.

“Given that students would be coming from various different locations across the country to live in our residence halls, we wanted to help ensure they would not potentially seed the virus within our campus community,” Gilmore said.

UC Student Association President Aidan Arasasingham said he thought the UC should be testing all students on-campus and in off-campus housing on a regular basis. “As we’ve seen in other universities, things can happen very quickly and whether it’s from the beginning of move-in or at some part during the term, COVID-19 doesn’t rest, doesn’t stop and our testing and our support for students shouldn’t stop as well after Day One.”

Those kinds of disparities are likely to continue driving universities’ decisions as the pandemic unfolds, said Dr. Van Orman, of USC.

“A larger, more well-resourced university that has a research lab that can build its own test or an academic medical center that can source tests is going to be in a really different position than a smaller state school that doesn’t have a lot of other resources to purchase or build a test,” she said. “For the institutions that can’t afford it, there’s a real equity issue there, I think, and that could get more acute, especially as we’re looking at who’s coming back to campus in January.”

Even regular, across-the-board testing has not been enough for all universities doing it to avoid virus outbreaks — or fend off community concerns.

UC San Diego, which had touted one of the more ambitious COVID-19 testing plans — even sampling wastewater from dorms for traces of the virus — faces a petition drive by hundreds of students and faculty members calling for a complete cancellation of in-person classes. The letter cited outbreaks at universities across the country. “To imagine that UCSD will be an exception to this rule is both arrogant and negligent,” the petitioners wrote.

Nevertheless, Isael Corona, the Berkeley student, said he felt comforted by his university’s decision to test. He’d flirted with sitting fall term out, but the opportunity to live out the final year of college with his friends in a 4-bedroom campus apartment was too good to pass up. This fall is the first time he’s had a bedroom to himself. He wears his mask and keeps six feet away from others. Getting a negative test result, he said, “just ensures that I’m doing everything OK.”