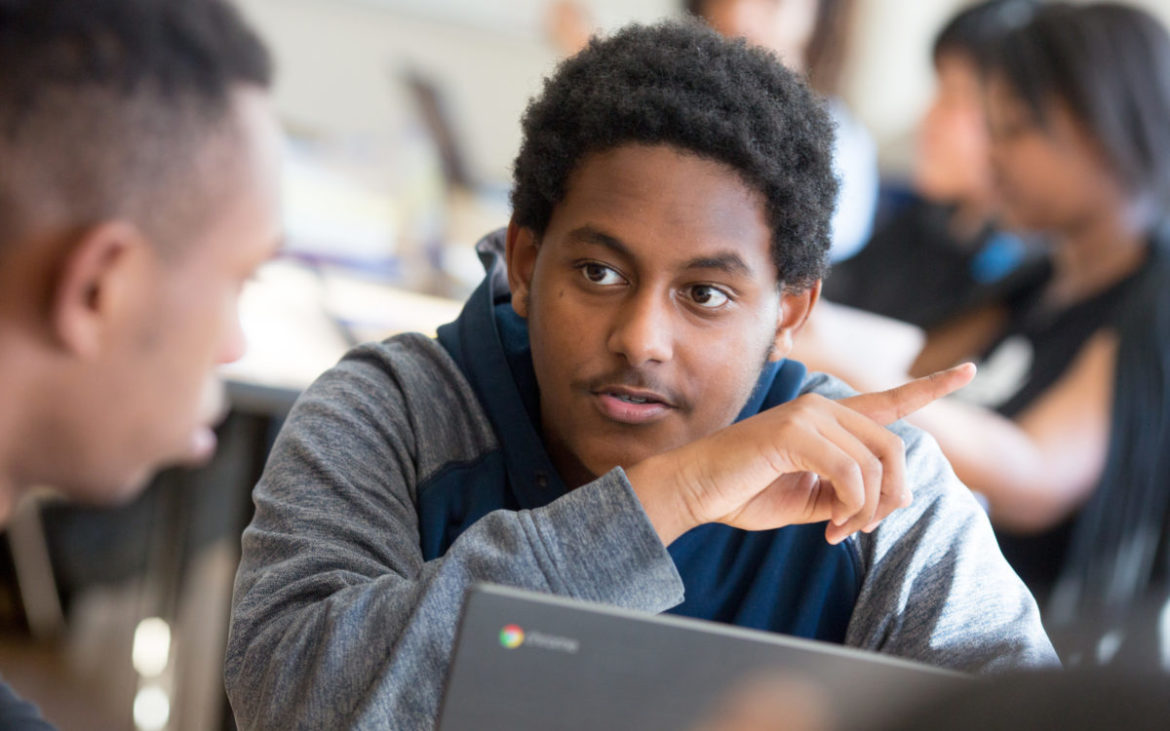 A ninth-grade student discusses an algebra activity with a classmate.
Photo by Allison Shelley/The Verbatim Agency for American Education: Images of Teachers and Students in Action

California would become the first state to require that all high school students pass a one-semester ethnic studies course to graduate if Gov. Gavin Newsom signs a bill that the Legislature passed on Monday, the last day of the legislative session.

But in order to get Assembly Bill 331 out of a Senate committee and on to a final vote, the primary author, Assemblyman Jose Medina, D-Riverside, proposed one amendment and accepted several others.

One amendment would push back the start date to the graduating class of 2029-30; districts would have to begin offering a course in the 2025-26 school year. Medina said the new schedule would give schools and districts “plenty of time to prepare for a smooth implementation” and give the state time to provide funding for the new courses, which would be considered a state mandate.

Another amendment would allow a school district’s or charter school’s governing board to adopt a “locally developed” ethnic studies course instead of a statewide model ethnic studies curriculum that is being developed.

In early 2021, the State Board of Education is required to adopt the model curriculum, which has been the subject of intense debate and criticism and is now in its second revision. Since the model curriculum is intended to serve as a guide, not a mandated curriculum, the bill would give districts and schools flexibility to decide what would be taught.

The amendment makes that authority explicit and creates the possibility that some districts would adopt a course that pays little attention to the model curriculum’s focus on the four minority groups traditionally covered by ethnic studies courses. They are African Americans, Latinos, Asian Americans and Native Americans.

“That would not be my intent,” Medina said Monday.

Last week, the state’s largest school district, Los Angeles Unified, on its own adopted an ethnic studies graduation requirement, starting in 2023-24. Earlier last month, Fresno Unified, the state’s fourth-largest district, adopted a two-semester ethnic studies requirement, starting with the class of 2021-22. Medina said he would not be surprised if other districts also establish an earlier timetable.

Quick passage of this bill, and another requiring ethnic studies for California State University graduates, which Newsom signed into law on Aug. 17, reflects the power of the Black Lives Matter protest movement and the growing recognition that all children should be taught the historical roots and the enduring legacy of ethnic and racial prejudice in America.

Ethnic studies broadly examine the history, culture, politics, contributions and prejudices facing ethnic and racial ethnic groups nationwide. But in California, ethnic studies grew out of protests at San Francisco State and UC Berkeley in the late 1960s. They led to demands for ethnic studies courses focusing on the four minority groups whose political struggles and rich heritage, advocates said, have been ignored in literature and history courses.

At the direction of Superintendent of Public Instruction Tony Thurmond, the California Department of Education’s draft curriculum keeps the focus on those four groups.

The draft curriculum emphasizes the importance of giving all students the opportunity to explore their own backgrounds and ethnicities. Its eight goals include enabling students to develop a better understanding of others, promoting “self-empowerment” for civic engagement and fostering “interpersonal communication.” The preamble recognizes that content that “challenges conventional ideals or prompts difficult conversations” may be controversial.

Proposed sample lessons delve into issues like the persecution of Native Americans starting in the Mission period, the discrimination against Mexican Americans as well as their influences on California politics and culture. Lessons would also focus on police profiling and government redlining policies that banned African Americans from white neighborhoods.

But in comments and testimonies over the past year, other ethnic groups, including Armenians, Sikhs and Indian immigrants, have objected that the model curriculum ignores their experiences. Jewish Americans objected to references to Jewish stereotypes and the downplaying of anti-Semitism. Critics said lesson plans were ideological, with a leftist perspective that sees the American experience only through the lens of oppression and identity politics.

To address concerns, Medina agreed to several amendments proposed by the California Legislative Jewish Caucus that would assure that ethnic studies courses would be objective and non-prejudicial. Instruction and materials, the amendments state, shall not teach or promote religious doctrine and will be appropriate for students of all races, religions, genders, sexual orientations and diverse ethnic and cultural backgrounds. And they “will not reflect or promote, directly or indirectly, any bias, bigotry or discrimination” against any person or group.

“I was happy to put in the language,” said Medina, who said it was similar to wording in the state’s sexual education and health law adopted in 2015.

Late Monday, the Senate voted 33 to 4 to pass AB 331 after little discussion. Sen. Andreas Borgeas, R-Fresno, questioned whether the Legislature should be mandating additional gradation requirements when it is also encouraging students to pursue vocational options.

“Something has to give to make room for this,” he said.  But Borgeas also said he supports ethnic studies and voted for the bill.