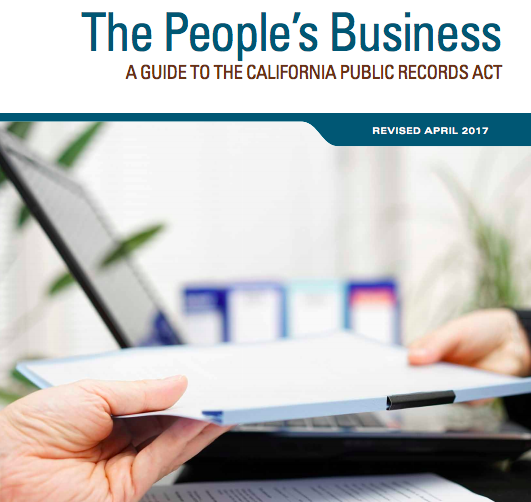 A school board candidate’s decision in early September to post emails related to the closure and reopening of schools due to the pandemic sparked anger and confusion among families about the California Public Records Act (CPRA) and how it is supposed to work.

The CPRA is one of the most extensive public records acts in the nation, granting everybody access to almost all of the documents produced by local governments.

The CPRA is guaranteed in the state constitution and is based on the concept that public records belong to the public.

The CPRA was first passed by the legislature and signed by Governor Ronald Reagan in 1968. The intent was to counter government secrecy. In addition to contracts and other official documents, the CPRA also covered communication with local government agencies. The intent was to shed light on who was influencing an agency’s decisions. Whether a political donor or a well-connected developer or even groups of concerned citizens, those contacts had often been hidden from public view.

The CPRA was added to the state constitution in 2004 through Proposition 59. Access to public records in California is now a right, akin to someone’s right to freedom of speech provided by the U.S. Constitution. It is not limited to local residents or citizens – public records requests can be made by anybody.

“As a public institution, we receive Public Record Act requests all the time,” Booker said. “For all kinds of issues, Piedmont residents, people outside of Piedmont. This happens much more often than the public understands.”

“It is a normal part of doing business at City Hall,” he said. “And the majority of them are things that we can deal with in the informal matter.”

There are several privacy exemptions to the act – certain police records, names of minors, and the like. However, the vast majority of documents are required to be disclosed upon a specific request. Those that are public but contain exempted information – such as a student’s name – must be redacted and then released.

“I would say 95 percent of all correspondence fall into the public domain,” Booker said. “For the most part, we are required to disclose quite a bit.”

A CPRA request recently caused a bit of a kerfuffle in Piedmont when school board candidate Hari Titan asked the PUSD provide emails regarding the closure and reopening of schools due to the COVID-19 pandemic.

The communications were turned over with student names redacted and Titan uploaded them to his website. Some parents claimed their privacy was violated through the release of the emails, although the CPRA is clear that the records are public.

There was also an issue with how the District redacted student names. Booker said the PUSD used a Sharpie to black out student names before re-scanning the documents but it turned out some names were still visible if someone blew up the document to a large enough size.

“What I found out is if you zoom in you can still see some of the names,” Booker said. “We contacted Mr. Titan when this was brought to our attention, we asked if he could pull down these emails so we could re-redact them.”

Booker said Titan immediately took the emails down and later told the PUSD he wasn’t going to post the re-redacted emails.

Booker said the District has tightened up it’s redaction process and will now use the blackout tool in the Adobe software it uses.

“We did the steps we thought were necessary,” he said. “We’ve taken some steps now moving forward in our processes to make sure that doesn’t happen again.”

Tulloch said a Sharpie is actually a very secure way to redact information.

“The surest way to redact is a sharpie,” he said. “Sometimes if you are not careful when you’re using the electronic version there’s data there that you can’t see, there’s metadata.”

A bigger issue might be a lack of understanding of what is a public document and the fact that the state of California considers public documents as belonging to the public. That means your letter to the city council or school board with your email or home address on it can be seen by anybody who asks.

“I just don’t believe the public really understands what the laws are regarding a public institution and what we disclose and disseminate,” Booker said. “I can understand where a member of the public sees their email posted on a website and reacts.

9 thoughts on “California Public Records Act: What it is, how it works, and why it recently roiled the parent community”