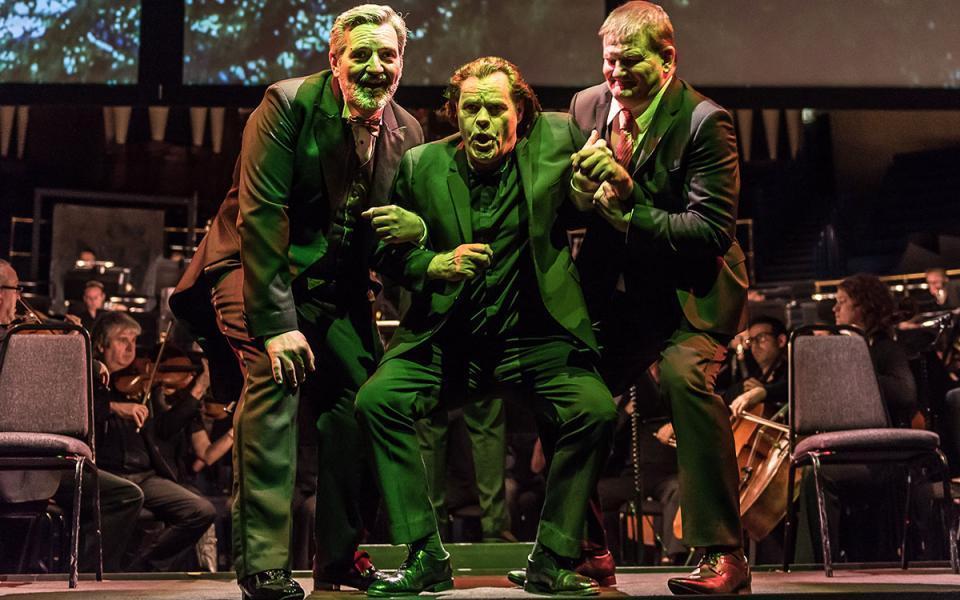 • Grab the ‘Ring’: It’s certain to be a good long time before the Ringheads of the opera world are going to be able to take in Richard Wagner’s four-part magnum opus in person, but the English company Opera North is affording them an incredible opportunity to view it online. All 15 hours worth of the Leeds-based company’s acclaimed 2016 production of “Der Ring des Nibelungen” are available for streaming at www.operanorth.co.uk/the-ring-cycle/. The four operas, set in the world of giants and dwarfs, Rhinemaidens and Nordic gods, are presented in 10 segments, beginning with Acts I and II of “Das Rheingold,” followed by “Die Walküre” and “Siegfried” and concluding with the shattering “Götterdämmerung.” Richard Farnes conducts the Opera North Orchestra and Chorus and a cast of dozens. Streaming is free, but viewers are encouraged to make “pay as you feel” donations to support the company.

A sip-and-strut fest: This cool event is more than a weekend away but merits an early heads up so you can snag yourself an appropriately post-Prohibition style cocktail and join in the “Drinks & a Dance” fun that ODC/Dance has planned for Sept. 10. We’ll plunge back to the early 1930s, take a class in mixology from bartender Tim Stookey of Stookey’s Club Moderne in San Francisco and sip on our concoctions while we watch the troupe revive choreographer Brenda Way’s “Walk Back the Cat” piece from 2016 performed to a jazz score from Paul Dresher and his musicians. If you live within 15 miles of Stookey’s place at 895 Bush in San Francisco, you can arrange to buy said cocktail, “The Aviation,” ahead of time and have it delivered. (Alternatively, they’ll send you the recipe, which includes gin, creme de violette, maraschino and fresh lemon juice.) It all kicks off at 5:15 p.m. with the class, followed by a conversation between Way (ODC’s co-founder) and Dresher as an introduction to the dance piece, inspired by painter Thomas Hart Benton’s murals on American city life in the 1930s. It’s $35 for the whole event (cocktails purchased separately) or $10 for the performance only. Instructions on sign-up at www.odc.dance/cat.

• Copeland’s ‘Waiting’ returns: Comedian and solo stage performer Brian Copeland is known for focusing his incisive sense of humor on some pretty dark subjects, including murder and racism. But arguably his hardest-hitting show, “The Waiting Period,” digs into his own longtime battle with depression. The title refers to the fact that if you buy a gun in California, you must wait 10 days to take possession of it. Copeland dealt with this some years ago when he purchased a gun with the intention of ending his life. At a time when officials fear the coronavirus pandemic is taking a psychiatric toll on a wide range of people, Copeland is reviving “The Waiting Period,” and its frank discussion of mental illness, in a series of livestreamed performances, each of which will be followed by a Q&A with the performer. Performances are at 7:30 p.m. Sept. 5 and 5 p.m. Sept. 13 and 27, Oct. 11 and Oct. 25 and Nov. 8. Productions are free, but donations are encouraged. You can access “The Waiting Period” at themarsh.org.

• Here comes the Goat Rodeo: Once upon a time, UC Berkeley’s Cal Performances was set to kick off its 2020-21 performance season with a huge concert at the Greek Theatre featuring all-world cellist Yo-Yo Ma and his classical-meets-Americana quartet known as the Goat Rodeo. The pandemic wiped out that Aug. 20 concert, but National Public Radio just gave us the next best thing. The radio service’s famed Tiny Desk concert series (the same series that gave Oakland’s Fantastic Negrito a major career boost) this week posted a performance of the foursome — Ma, mandolinist Chris Thile, fiddler Stuart Duncan, bassist Edgar Meyer — with guest vocalist  Aoife O’Donovan performing three songs from their recently released second album, “Not Our First Rodeo.” The Tiny Desk series have featured scores of artists tackling their songs in creative ways in a small office, and now, of course, the performances are handled with all social-distancing protocol accounted for. You can find the free performance at www.npr.org/sections/arts or on YouTube.

• Love and games: Madhuri Shekar’s “Love and Warcraft” offers some sharp observations about the video game culture while delivering a charming rom-com with a hint of “Cyrano de Bergerac” in it. The play revolves around a champion gamer who doubles as a letter-writer for people who are hopelessly besotted but unable to express their feelings. She has no love life and doesn’t want one until … well, you can probably guess what’s coming. American Conservatory Theater’s Master of Fine Arts program is tackling the comedy in a virtual production that premieres Sept. 4. It will be live-streamed through Sept. 12 and then offered on demand Sept. 18–25. Tickets are $20-$25; go to www.act-sf.org.