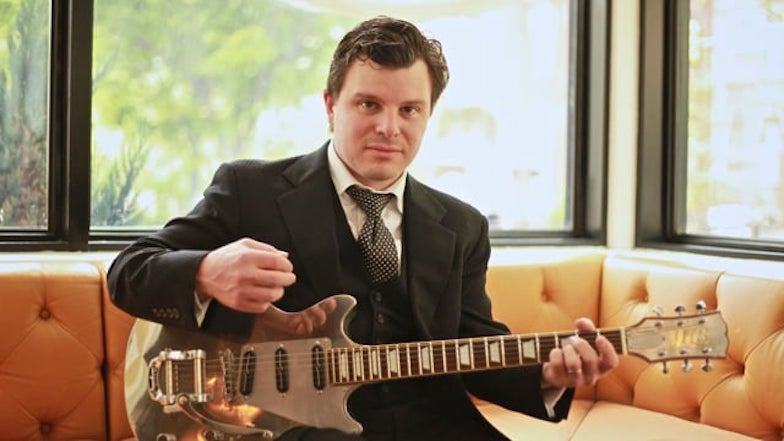 Composer DJ Sparr's commissioned work for the California Symphony will be featured in a radio broadcast on KDFC. (Photo courtesy of PJ Sykes)

Tune in some talent

Walnut Creek-based California Symphony is justifiably proud of its Young American Composers program, which commissions a major work from emerging composers for each of his or her three years in residency with the orchestra. Since its 1991 inception, seven of the nine young participants so far have gone on to win the prestigious Rome Prize; one (the Bay Area’s Mason Bates) has won a Grammy, and another (Kevin Puts) won the 2012 Pulitzer Prize in music. Now the symphony, in partnership with KUSC Radio in Los Angeles and KDFC here in the Bay Area, is parading their talent across the airwaves with a series of monthly Sunday night broadcasts of past concerts featuring their works. The first KDFC program launches at 8 p.m. Sept. 27 with a reprise of a May 2014 concert highlighting DJ Sparr’s “Dreams of the Old Believers.” Also on the program, conducted by Donato Cabrera, are Rimsky-Korsakov’s “Scheherazade” and Rachmaninoff’s “Rhapsody on a Theme by Paganini,” featuring pianist Ilya Yakushev. Tune in to KDFC on the FM dial at 90.3 in San Francisco, Berkeley and Oakland, at 89.9 in Napa and Sonoma and at 104.9 in the South Bay.

Museums take the next step

San Francisco museums have been given the green light to begin accepting visitors again. In the flesh. The de Young Museum in Golden Gate Park will reopen Sept. 25 with social-distancing rules in place, timed entries enforced and face masks a requirement. The museum’s marquee exhibit, “Frida Kahlo: Appearances Can Be Deceiving” ($20-$35 for nonmembers) is sold out until next week, but general admission visitors have lots of options for viewing other de Young exhibits ($6-$15 for nonmembers) beginning Sept. 25. Check the website to review safety guidelines and schedule a visit (https://www.famsf.org). Meanwhile, the Asian Art Museum is scheduled to reopen Oct. 3, and the San Francisco Museum of Modern Art is scheduled to reopen Oct. 4; both will offer free admission and parking for a limited time (asianart.org, www.sfmoma.org). The Legion of Honor is eyeing a mid-October reopening.

For the first time, an important lecture series hosted by the Dominican University of California in San Rafael, with co-sponsorship from Book Passage in Corte Madera, is throwing its doors open for free, pandemic-era participation. On Sept. 24 at 5:30 p.m., we can all watch Pulitzer Prize-winning biographer Jon Meacham in conversation with Stanford history professor Clayborne Carson about his 12th book, “His Truth Is Marching On: John Lewis and the Power of Hope” (Random House, $30, 368 pages). Meacham, who won the 2009 Pulitzer for “American Lion,” his biography of Andrew Jackson, has said he considers late civil rights pioneer Lewis as important to modern history as Thomas Jefferson, James Madison and Samuel Adams were to the founding of our democracy in the late 18th century. Registration for the talk takes place at https://dominican.extendedsession.com.

Actress, director and playwright Emma Rice has delighted Berkeley Repertory Theatre audiences with such enchanting productions as “Tristan & Yseult” and “The Wild Bride.” This weekend, viewers can catch a livestreamed production of her 2017 rom-com musical “Romantics Anonymous.” The show, written by Rice, Michael Kooman and Christopher Dimond and directed by Rice, revolves around the fumbling romance between two socially awkward people. Rice’s theater company, Wise Children, is performing the show at the U.K.’s Bristol Old Vic Theatre and the production will be streamed across the globe. Berkeley Rep’s website is hosting the production at 1 p.m. Sept. 26. Access is free to company subscribers, 16-31 pounds (roughly $20-$39) for everyone else. You can access the show at www.berkeleyrep.org.

Back in March, Laurel Ollstein’s play “They Promised Her the Moon,” about women astronauts’ attempts to gain entry on U.S. space flights, was enjoying a well-received production at TheatreWorks Silicon Valley when the show was shut down by the coronavirus pandemic. Now TheatreWorks is hosting an online reading of Ollstein’s new play, “Pandora,” which offers a unique re-imagining of the Pandora’s box myth. The play will be read by actors across the country, directed by Giovanna Sardelli, and presented via Zoom on TheatreWorks’ website from 6 p.m. Sept. 24 through Sept. 28. The presentation is free, but donations are encouraged and will benefit TheatreWorks, which, like other theater companies, is struggling for revenue due to shelter in place regulations. Go to www.theatreworks.org.