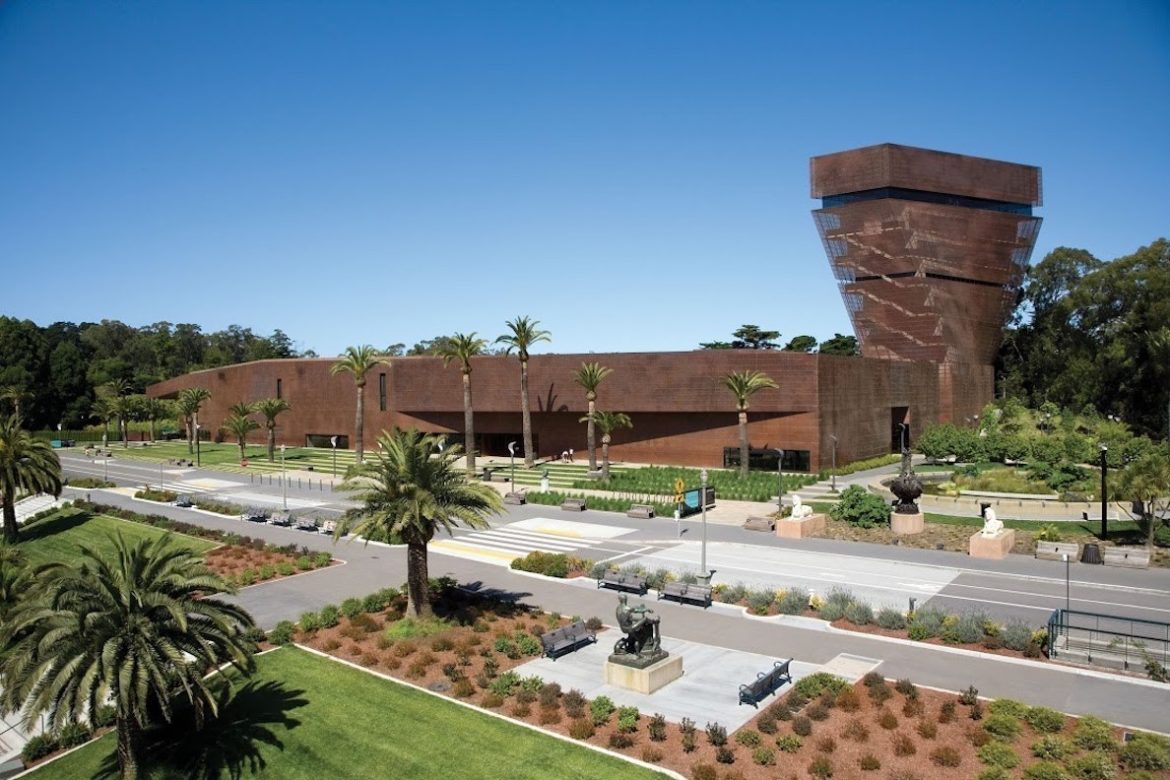 The de Young Museum in Golden Gate Park officially reopened to the public on Friday with the premiere of the exhibition, “Frida Kahlo: Appearances Can Be Deceiving.”

Museum members and donors were first invited to preview the exhibition last Tuesday.

All San Francisco museums have been closed since shelter-in-place orders went into effect on March 14. Following the city’s new pandemic guidelines, the de Young will be the first major art museum in the city to reopen. To do so, it has reduced visitor capacity by 25%, and it is offering tickets with timed entry to encourage social distancing in its galleries.

Adult museum visitors and staff will be required to wear face coverings while inside the building, and plexiglass screens have been installed at cashier desks. The Museum Store will be open, but the coat check, the Hamon Observation Tower level, Piazzoni Murals Room and de Youngsters Studio will remain closed.

The exhibit, “Frida Kahlo: Appearances Can Be Deceiving,” running through Feb. 7, 2021, displays 34 of Kahlo’s artworks — drawings, paintings and a lithograph — as well as her personal belongings from her lifelong home, La Casa Azul, in Mexico City. When the artist died at age 47 in 1954, the house, with all her possessions inside, was locked up for 50 years. When La Casa Azul was unsealed in 2004, a treasure trove of the artist’s photographs, letters, jewelry, clothing, cosmetics, and medical corsets were unearthed. The home is now called Museo Frida Kahlo.

When Kahlo was 6, she fell ill with polio, which left her right leg permanently damaged. At age 18, she was severely injured in a 1925 bus accident that wrecked her spine and pelvis and subjected her to a life of chronic pain. While she recovered from the accident, she took up painting. Kahlo also employed fashion to express her creativity and personality; starting in the 1930s, she wore Tehuana dresses to assert her political beliefs and her pride in her Mexican heritage.

“Kahlo composed unique and meaningful sartorial ensembles and posed for photographers that captured her iconic persona — as evidenced by the colorful outfits and stunning photographs on view in this exhibition,” Gannit Ankori, advising curator of the exhibition, said in a statement. “She hid her disabilities behind such mesmerizing facades as she performed the role of the flamboyant Mexican woman. But in her paintings and drawings, Kahlo deliberately exposed her struggles, traumas, and alternative ‘selves,’ even as she challenged social norms, gender conventions, and art historical traditions.”

The artist went through a variety of leather and plaster medical corsets to support her spine throughout her adult life. “Kahlo decorated and painted her corsets, making them appear as though she had explicitly chosen to wear them,” states Circe Henestrosa, guest curator of the exhibition. “She included them in her art and in the construction of her style as an essential wardrobe item, almost as a second skin.”

Kahlo married 43-year-old Diego Rivera, then a famous muralist, in 1929, when she was just 22 years old, and the two had a tumultuous and unconventional relationship. The couple moved into her childhood home in the 1930s, and because her poor health forced her to spend so much time there, she made it a vibrant and comforting space, filled with diverse Mexican art. Her courtyard was alive with citrus trees, bright flowers, statues, and her small menagerie of pets. Literary, political and artistic thought leaders were frequent guests to the famous couple’s home, and now many artifacts of La Casa Azul are on display at the de Young.

Other exhibits at de Young Museum

The de Young is hosting another exhibition, originally launched in February, titled “Uncanny Valley: Being Human in the Age of AI,” which explores human dependence on artificial intelligence, and will reopen with an additional piece — Pierre Huyghe’s beehive-headed bronze sculpture, “Exomind,” on display in the Barbro Osher Sculpture Garden.

Since shelter-in-place orders, all art institutions, including the Fine Arts Museums of San Francisco — the umbrella organization that runs the de Young and Legion of Honor — have been struggling financially.

According to KQED, on July 1, 14 FAMSF employees were laid
off and 33 were furloughed until the museums reopened. The Fine Arts Museums wasn’t alone: the San Francisco Museum of Modern Art (SFMOMA), the Exploratorium, Yerba Buena Center for the Arts and the Museum of the African Diaspora all announced layoffs this summer.

FAMSF plans to reopen the Legion of Honor to the public and reinstate its furloughed employees in mid-October. The dates for the Legion’s film and installation “Alexandre Singh: A Gothic Tale,” inspired by the 19th-century Gothic revival and San Francisco film noir, have been extended through the fall.

Through December 2021, both museums will offer free general admission as well as a $15 discount on special exhibitions to essential workers — including those who work in emergency services, health care, grocery stores, city operations and maintenance, social services, public transit and delivery services.

The Asian Art Museum reopens to the public on Oct. 3, with free admission through Oct. 12. Featured exhibitions and installations include “Awaken: A Tibetan Buddhist Journey Toward Enlightenment”; “Jean Shin | Pause”; and “Chanel Miller: I am, I was, I will be.” The museum cafe will remain closed for the time being.

SFMOMA reopens on Oct. 4, with free admission and parking through Oct. 18. New exhibitions and installations will highlight Bay Area artists, including a celebration of the figurative painter “David Park: A Retrospective” and a companion exhibition, “David Park and His Circle: The Drawing Sessions.” A new series called “Bay Area Walls” will debut site-specific commissions by local contemporary artists starting with large-scale painting commissions by Muzae Sesay and Marina Perez-Wong and Elaine Chu of Twin Walls Mural Company.

The SFMOMA coat check will be closed, but grab-and-go dining options will be available at Cafe 5, which visitors may enjoy at socially distanced outdoor seating in the Jean and James Douglas Family Sculpture Garden.

Reopening days, times, and other details for visitors

• de Young Museum: Starting on Friday, the museum will be open from 9:30 a.m.-5:15 p.m., Tuesday-Saturday. The museum is at 50 Hagiwara Tea Garden Drive, Golden Gate Park, San Francisco, 415- 750-3600. General admission tickets are $15 for adults, $12 for seniors, $6 for students, free for kids age 17 and under; general admission is free on Saturdays. Downloadable audio tours of the Kahlo exhibition are $8. Book your tickets here.