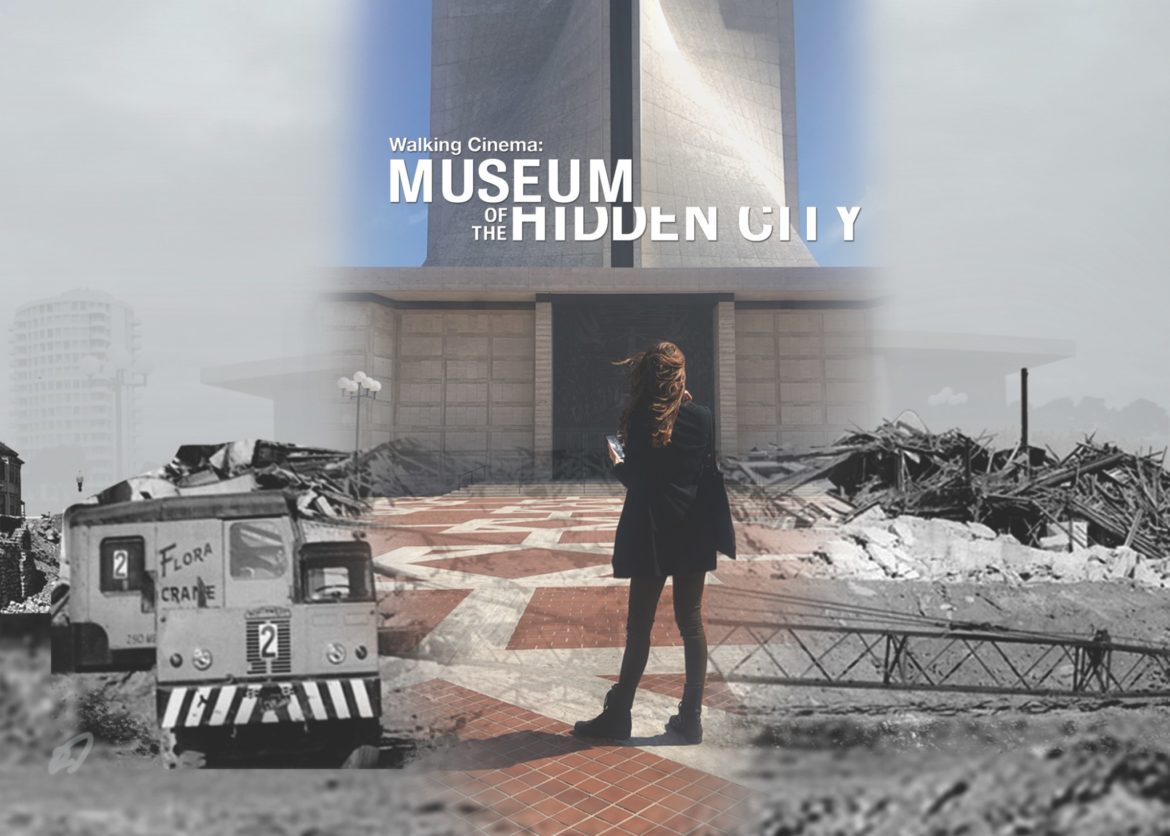 A still from the Museum of the Hidden City app shows the debris of buildings that had to be cleared before the new St. Mary's Cathedral could be built. (Images courtesy of Michael Epstein, Walking Cinema)

The idea kind of started in Boston. While in grad school at MIT studying comparative media, Michael Epstein went on a tour of the Boston Freedom Trail, a 2.5 mile path that highlights 16 brick-laden historical sites. The guides were dressed as if the Declaration of Independence were signed yesterday.

“It was just a path, but it was very interesting to me that people just followed that path,” Epstein said. “I got interested in the idea that our phones, with all their capabilities, could help us explore the world in a completely different way. So I started experimenting with walking tours.”

After graduating, he brought his ideas to Venice, Italy, and the La Biennale di Venezia, and later, the New England Aquarium before founding his studio, Walking Cinema, in San Francisco in 2006.

In short, Walking Cinema blends technology, journalism, data and history to produce immersive content for museums and broadcast companies to enhance their narratives.

Their latest endeavor is the Museum of the Hidden City, an augmented reality tour of various neighborhoods in San Francisco and how they have been impacted by waves of migration and gentrification. The project has four planned parts that serve as films in their own right to explore hyperlocal history in the Fillmore, the Bayview, the Tenderloin, and Mid-Market.

“It’s a city that is leading the county in the way that it’s trying to lead on social issues,” Epstein said. “A lot of the programs that start here become national. It’s a city that experiments with things. When you walk down the street, you can’t help but see the problems. This project is aimed at a four-part documentary film, but a film where you can walk through the streets and be involved with that storytelling — not only challenges but also solutions.”

It is the only museum still open in San Francisco under stay-at-home orders. The first “episode,” “The Fillmore” took two years to research and produce, and was released in early, pre-pandemic 2020.

The landscape is the venue, starting at Cathedral of Saint Mary of the Assumption. Using just a smartphone, guests are led through the neighborhood and its history of Black migration and crooked development policies. The virtual guides are based on Black historical figures central to the Fillmore’s redevelopment, Helena Hamilton and a composite “Architect.”

Tianna Bratcher, an Alaska native who has participated in slam poetry competitions and festivals across the country and moved to Oakland in 2017, lent her voice and poetic prowess to Hamilton, the daughter of one of the neighborhood’s development leaders, Bishop Wilbur Hamilton. The story goes that Epstein saw Samuel Getachew, the voice of the “Architect,” at a Youth Speaks event and recruited him to the project. Getachew chose Bratcher as his fellow guide easily; the mutual respect was already established.

“Going into it I thought, ‘This is a dope project; I get to work with a really dope poet,’” Bratcher said. “As we moved through it, the importance grew in me. I see the importance of this being documented. I think it’s so important that in this time, we’re holding onto narratives of Black folks that have and do experience gentrification and these systemic violences, and that we’re archiving that.”

As is Walking Cinema’s signature, the tour uses elements of augmented reality to create interaction between the tour-taker and the space around them. Audio narration coincides with the tour location, and holding up one’s phone to a particular building creates a digital overlay with additional information.

“Virtual reality cuts you off from what’s around you, doesn’t matter where you’re standing,” Epstein said. “[Augmented reality] turns on your phone camera and offers a layer on top, like a picture or an animation. The physical world around you with AR helps you see the world in a different way. It changes the way people look at cities when they move through them.”

Currently, Epstein and Walking Cinema are seeking grants for the subsequent episodes, the next of which is about the Tenderloin neighborhood.

The pandemic has impacted some of the indoor stops for the museum tour, but there are still four locations partnering with Walking Cinema to provide an indoor experience, and all of them are Black-owned businesses. The intersection of racial justice and the coronavirus pandemic have also brought a new urgency to a narrative that, like augmented reality, enables us to change our perspective.

“It’s amplified what we’re doing,” Epstein said. “It’s where Black Lives Matter is heading, looking at structural racism in housing policy. Like Michael Jordan said, ‘It’s time to listen.’ We’re giving voice to these neighborhoods to listen and absorb and see the longer arc of what they’ve been battling.”

The Museum of the Hidden City app is free for smartphones. The tour can be taken any day of the week, but check the website for ideal times, as some stops may be closed or compromised.