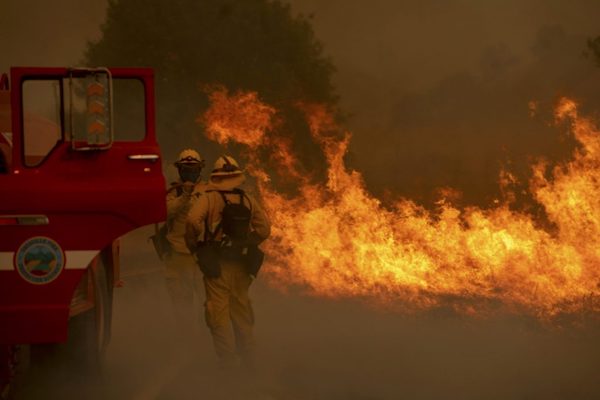 Firefighters attempt to stop a grass fire from jumping a road in Vacaville on Aug. 19. Photo by Karl Mondon, Bay Area News Group

Two of the three largest fires in California history are raging across the state alongside about 600 others, burning more than 1.3 million acres — an area about the size of Delaware — and forcing more than 100,000 people to evacuate.

And that’s just the tip of the iceberg.

Dry lightning storms and gusty winds forecasted to slam the Bay Area through Tuesday could exacerbate the fires’ spread and start new ones, stretching already overworked firefighting crews to the limit. And California hasn’t yet entered the prime of its fire season — which is likely to worsen as climate change takes its toll on the Golden State.

Fourteen of California’s 20 largest wildfires have occurred since 2007 — eight of them in the last five years. Today the state has 78 more “fire days” than it did 50 years ago.

Extreme weather conditions has led to fire growth, making the #LNULightningComplex now the 2nd largest fire in California and the #SCULightningComplex the 3rd. Dry lightning is expected today through Tuesday so stay #WildfireReady by having an evacuation plan in place. pic.twitter.com/ekNve67hxI

It also came about a week after California and the federal agreement agreed to work together to reduce fire risk by thinning 1 million forest acres a year by 2025.

Meanwhile, 10 states are sending California fire engines or planes, though shortages of resources and firefighters persist. Newsom on Friday also asked Australia and Canada for help.

California is bending the curve again, even as conditions remain grim in the Central Valley, which is battling a trifecta of unhealthful air, heat and coronavirus outbreaks. The state on Friday reported its lowest weekly case average (6,662) in nearly two months and lowest weekly death average (119) in a month, according to the Mercury News. Meanwhile, hospitalizations and intensive-care admissions sank to levels not seen since late June, CalMatters’ tracker shows. Eight counties — including San Diego, Orange and Napa — fell off the state’s coronavirus watch list in the last week, and cases are steadily decreasing in the former hotspot of Los Angeles, increasing pressure on Newsom to come up with a game plan for reopening businesses. The governor will likely release new guidelines this week.

Some unemployed Californians will receive an additional $300 weekly benefit following the federal government’s Saturday approval of the Golden State’s application to a program Trump launched in the absence of a Congressional plan — but it’s unclear when the money will be made available to claimants. Earlier this month, California’s unemployment department said it could take up to 20 weeks to process new federal benefits as it grapples with a backlog of 1 million claims. Around 375,000 Californians filed initial claims the week ending Aug. 15, pushing the state’s total to nearly 10 million since the onset of the pandemic, according to the California Center for Jobs and the Economy.

California will receive $4.5 billion from the federal government, with the potential to draw down more in the future. The agreement comes soon after Newsom said California would not be able to afford Trump’s plan for a $400 weekly benefit to which states would contribute $100.

As lawmakers head into the final week of the legislative session, expect a bitter fight between progressive and moderate Democrats over a key piece of Newsom’s agenda: guaranteeing more workers can return to their jobs after taking family leave to care for a new baby or sick family member, CalMatters’ Laurel Rosenhall reports. The pandemic has complicated the bill’s seemingly clear path to victory. Though Newsom and lawmakers reached an agreement months ago to increase job protections, business-friendly Democrats are now working to block or dilute the plan, while progressives argue workers need the ability to take care of their family more than ever.

California on Friday sued Postmaster General Louis DeJoy over recent changes at the U.S. Postal Service, arguing they could hamper the November vote-by-mail election in what marks Attorney General Xavier Becerra’s 89th lawsuit against the Trump administration. The changes, which include limiting overtime for mail carriers and removing some sorting machines, have resulted in piles of backlogged packages — and gnats swarming around those containing rotted meat and dead baby chicks — at California postal facilities, the Los Angeles Times reports. But when it comes to the election, California has workarounds for delayed mail: Newsom signed an order requiring ballots be accepted up to 17 days after the election.