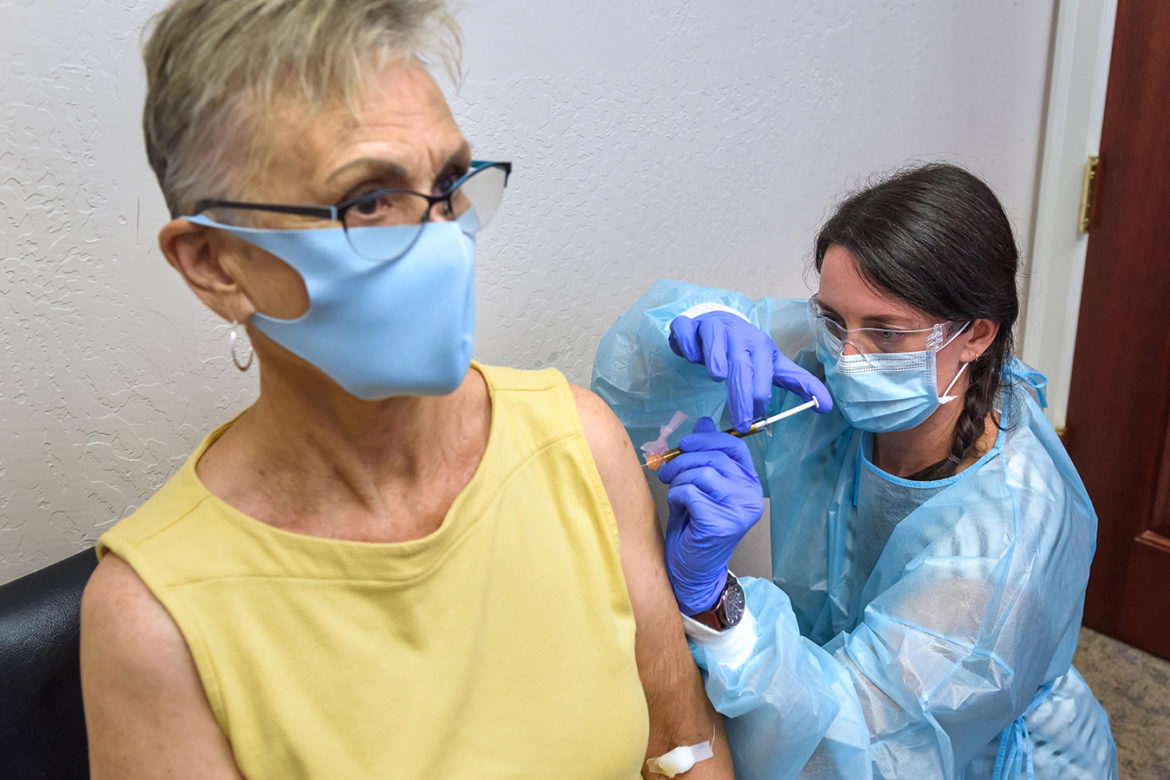 MEDFORD, Ore. — From the outside, it appears to be just another suburban allergy clinic, a tidy, tan brick-and-cinder-block building set back from a busy highway and across the road from an auto parts store.

But inside the offices of the Clinical Research Institute of Southern Oregon, Dr. Edward Kerwin and his staff are part of the race to save the world.

Kerwin, 63, was tapped this spring to lead one of the nearly 90 U.S. clinical trial sites taking part in the large-scale, phase 3 test of a vaccine produced by biotech startup Moderna to fight the virus that causes COVID-19.

Starting in late July, Kerwin’s clinic, set in a working-class region roughly halfway between Seattle and San Francisco, began enrolling up to 40 participants a day for the two-year study. He hopes to recruit as many as 700 volunteers by the end of August.

They’ll join the 30,000 test subjects needed nationwide to determine whether the Moderna vaccine can tame a disease that has infected 5.4 million Americans and claimed the lives of more than 170,000. Another vaccine, produced by Pfizer and BioNTech, a German company, is being tested in nearly 30,000 more recruits. 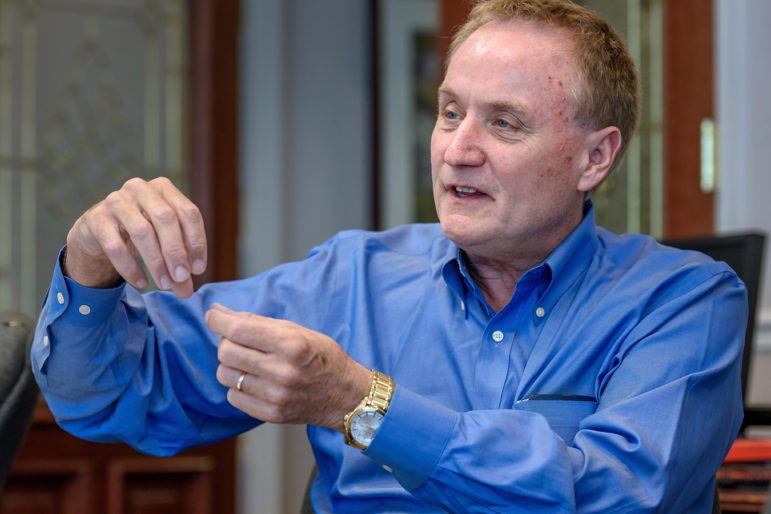 Dr. Edward Kerwin, medical director of the Clinical Research Institute of Southern Oregon, has led more than 750 clinical trials during the past quarter-century. Kerwin, an allergist and immunologist, was tapped as the principal investigator for Moderna’s COVID-19 vaccine trial at the Medford test site. (Jim Craven for KHN)

“It’s a perfect opportunity for science to come to the rescue,” said Kerwin, a lanky figure in a bright-blue shirt and khaki pants. He led visitors to a conference room, took a chair well outside social-distancing range and doffed his mask, the better to explain the magnitude of this moment.

Dr. Edward Kerwin, medical director of the Clinical Research Institute of Southern Oregon, has led more than 750 clinical trials during the past quarter-century. Kerwin, an allergist and immunologist, was tapped as the principal investigator for Moderna’s COVID-19 vaccine trial at the Medford test site.

He acknowledged “it may seem like a surprise” that Medford is the site of a clinical trial to halt the world’s biggest medical challenge in a century. But Kerwin, who worked as a NASA scientist before heading to medical school and a career in allergy, asthma and immunology, has led more than 750 clinical trials over the past quarter-century, mostly focused on asthma, lung disease and skin disorders.

He moved to southern Oregon in 1993, choosing the rural Rogue Valley because of its beauty and cultural opportunities, such as the Oregon Shakespeare Festival in Ashland. As his medical expertise grew, he built a top-enrolling clinical trial site that coexists with a clinic that treats asthma and allergy patients. Along the way, he established deep roots in the valley, where he founded Bel Fiore, a $10 million winery and vineyard that features a 19,000-square-foot chateau.

Even with his experience, however, testing a vaccine to halt a global pandemic is a challenge like no other, Kerwin said. When the call came from Velocity Clinical Research — the North Carolina-based company that operates Kerwin’s clinic, known as CRISOR, and more than a dozen other COVID trial sites across the U.S. — he paused for a moment.

“You take a big gasp and say, ‘Do we have the resources to do this?’” Kerwin said. “You definitely do it, but you want to do your homework.”

So far, the testing is going well, he said. Unlike most clinical trials, for which it’s difficult to recruit enough volunteers, the COVID effort has attracted intense interest. All of Velocity’s sites are paying participants $1,962 for the two-year trial, but Kerwin’s staff of two dozen didn’t advertise widely at first.

“We would worry our phone would ring off the hook,” Kerwin said.

The Medford clinic is the only COVID vaccine clinical trial site in Oregon, so participants have come from as far as Portland, nearly 300 miles north.

It’s a prime example of the gamble drugmakers and federal trial sponsors take when deciding where to host large-scale COVID clinical trials. To gauge whether the vaccine works, you need to know there’s a good chance participants will be exposed to the virus in the environment. Ethically, in traditional phase 3 trials, you can’t deliberately infect people with COVID, a disease with no treatment or cure, though some propose doing just that in controversial human challenge trials. 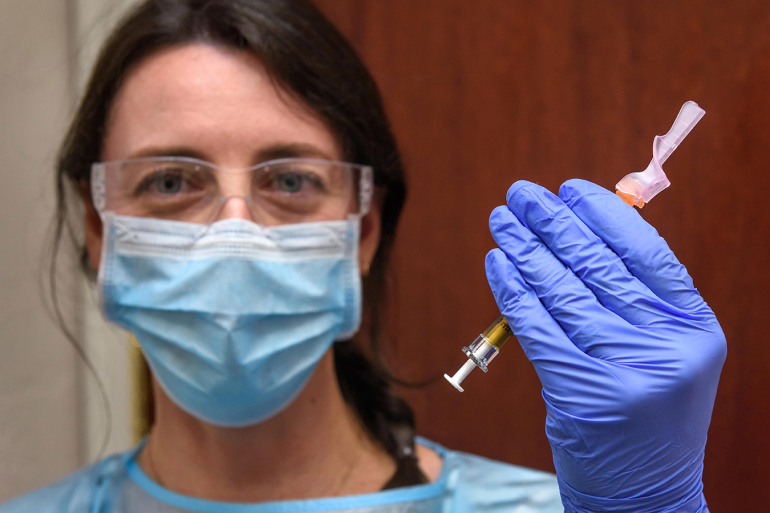 Audrey Kuehl, a study coordinator at the Clinical Research Institute of Southern Oregon, holds a dosage of the vaccine used for the trial. (Jim Craven for KHN) 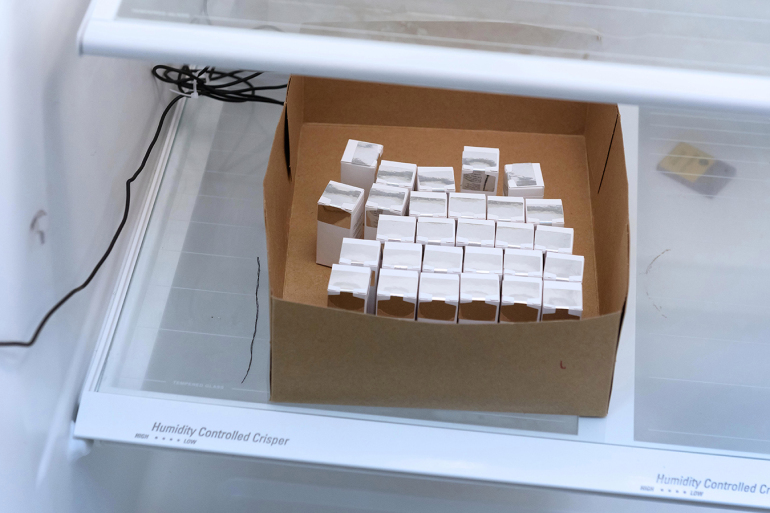 Boxes containing vials of Moderna’s COVID-19 vaccine, known as mRNA-1273, are refrigerated at the Clinical Research Institute of Southern Oregon in Medford. (Jim Craven for KHN)

Southern Oregon has not been a hot spot for COVID, with fewer than 500 confirmed cases and two deaths in Jackson County, which includes Medford. But, Kerwin said, it’s at risk of becoming one, offering the opportunity to vaccinate trial participants before the virus becomes widespread.

“It’s almost too late in New York and Arizona,” he said.

In the meantime, he’s trying to shift the odds that trial volunteers will be exposed to COVID-19 by reaching out to people at greater risk of infection.

So Kerwin’s team has contacted businesses in industries such as agriculture and food production, where the disease has been known to spread with particular virulence. Locally, that includes employers such as Harry & David, the food retailer famous for its fruit-of-the-month shipments, and Amy’s Kitchen, the maker of vegetarian frozen meals, which operates a production plant in the area.

The Medford trial site is also emphasizing enrollment of elder volunteers, those age 65 and up, who are at higher risk of serious illness or death from the coronavirus.

One of the first volunteers was Trish Malone, a 68-year-old cultural anthropologist who lives in Ashland. Like many of the other participants, she has enlisted in Kerwin’s previous clinical trials of devices to treat asthma. When clinic staffers reached out to ask whether she’d participate in the COVID trial, she didn’t hesitate.

“I said, ‘Wow, yes,’” Malone recalled. “It’s because of [Kerwin] and his expertise. Little Medford gets to have this testing.”

Participating is a way to “give back” to her community, said Malone, who sat, calm and still, on a recent Thursday as study coordinator Audrey Kuehl sank the injection into Malone’s left shoulder.

“She was fast. It was no pain, and it was fine,” Malone said.

Half of the patients in the trial will receive two doses, 28 days apart, of the Moderna vaccine, called mRNA-1273. It uses a snippet of the genetic code of the coronavirus, not the virus itself, to instruct cells to produce a protein that triggers an immune response to protect against infection. The other half will receive a placebo, or saline dummy shot.

Three study coordinators at the Medford clinic, Kuehl among them, know which patients receive which dose, but the information is kept from volunteers and other staff members — including Kerwin, the principal investigator.

Participants who receive the vaccine may experience some side effects, such as redness at the injection site, muscle soreness, fatigue or headache, Kerwin said. “It’s a sign the vaccine is working with your immune system,” he said.

Four days after her first injection, Malone was disappointed to report no reaction at all. “I am bummed, totally bummed,” she said. “I have no symptoms. I think I got the placebo.”

That may not be true, of course. Even if it is, Malone said, she’s happy to participate in an effort that may help stop the deadly virus.

“This a global pandemic,” she said. “What can I do to help?”

The study will run for two years so that investigators can track the longer-term effects of the vaccine. Malone will keep a diary of her temperature and symptoms, if any, and have regular blood tests to determine whether she has antibodies to the virus.

Kerwin is optimistic about the chances the Moderna vaccine will work, agreeing with Dr. Anthony Fauci, the nation’s top infectious disease expert, who predicted the study could demonstrate efficacy by November or December. Kerwin estimates that the vaccine could prove 90% effective, though outside infectious disease experts said it’s far too soon to tell.

Even if the trial shows the vaccine is successful, it would take months longer to produce and deliver enough injections for the U.S. and beyond.

As he enrolls patients and awaits data, Kerwin said, he’s mindful of the real-world implications of his work. His mother, in her 90s, lives in a Denver nursing home where, so far, there have been no cases of COVID-19. But the threat looms.

The tragedy of the pandemic has underscored the promise of science — and the interconnectedness of people far beyond this small corner of Oregon.