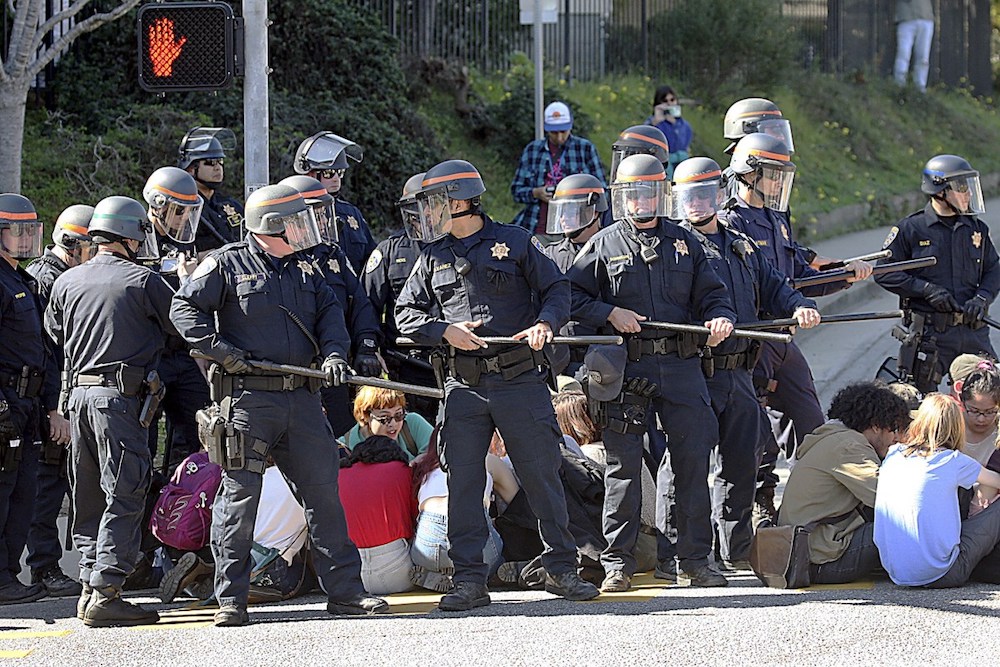 University of California police form a barrier around a group of students before they are arrested and carted away for blocking an intersection at the entrance to UC Santa Cruz on February 12, 2020. Photo by Dan Coyro, Santa Cruz Sentinel

As the University of California reels from the coronavirus pandemic along with the rest of the state, the system’s leaders have been discussing ways to mitigate the damage.

In addition to the massive fiscal impact the recession and COVID-19 is having on UC finances, the three-day meeting last week of the UC board of Regents shed light on the major fault lines the system will grapple with in the months ahead, including campus police reform, whose wages to cut and whether it cares enough about local religious beliefs to remove itself from a multinational telescope project.

Here’s what you need to know.

Through June 30 the UC system has lost nearly $1.8 billion, according to data obtained from the system by CalMatters.

The 10 UC campuses have collectively lost $614 million because of the effects of COVID-19, much of that due to lost revenues in housing and dining. UCLA reported the highest costs related to Covid at $180 million through June. Its chancellor, Gene D. Block, said during the Regents meeting that while the campus normally produces 35,000 meals a day on campus, in May that dropped to 1,000.

Meanwhile, the UC system’s medical centers have lost more than a $1 billion. The total hit of about $1.8 billion to the whole UC system is partially offset by nearly $800 million federal CARES Act stimulus money.

“We don’t know how long the pandemic will last, we don’t know the extent of the economic downturn,” said outgoing UC President Janet Napolitano.

As the state’s third largest employer, the UC system’s decisions about its labor force will have an outsized effect on California employment. Napolitano said the system should look for salary reductions and furloughs before eliminating positions.

“When we do need to reduce staffing levels, voluntary attrition is preferable to involuntary layoffs,” she said. The model, something other chancellors and Regents members voiced support for, would cut wages on a sliding scale, taking a bigger bite out of senior officials — some of whom make more than $300,000 — while sparing workers who make a tenth of that.

Regent Hadi Makarechian said the UC should exploit its strength as a system to move reserves from campuses to others that are hurting more financially.

He and Regents Chair John A. Pérez want to see a plan at the next board meeting in September to spare the lowest-paid workers from budget tightening measures. “Those are the ones that once you cut them, you lay them off, their lives are destroyed,” said Makarechian.

UC Riverside Chancellor Kim A. Wilcox said his campus has laid people off temporarily, mostly in housing and dining. He said those layoffs affected lower-paid workers. UC Davis furloughed some counselors in June.

If lower residency loads at UCLA continue, a necessity to practice social distancing on campus that limits how many students can live together, Chancellor Block said the campus will lose $152 million through next June.

But housing and dining losses are expected to be temporary. Block expects a “V-shaped” recovery to those revenues because demand for food and living quarters will always be strong once it’s safe to restore communal dwelling. In fact, UCLA is building housing for another 5,800 students, he said.

The system’s deeper concerns are over ongoing state support and tuition revenues, which form the lion’s share of funding for system’s educational mission. UC Berkeley’s chancellor, Carol Christ, said she expects to experience “serious financial challenges” for the next three years. Already, the state budget has cut its support for UC’s core operations by 8 percent, or $301 million. If Congress approves another round of federal stimulus by Oct. 15, the state will rescind a portion or all of those cuts.

The UC system’s enrollment picture is coming into clearer focus, with officials predicting that in-state students should return to the UC in similar numbers as before. But the decisions of out-of-state and international students — who combined account for nearly a fifth of UC’s enrollment — are less clear. Those students pay much higher tuition and may choose to attend campuses closer to home at a cheaper price, especially as most UC courses will be taught online.

Current UC students are pushing for an abolition of the system’s police force. The 10 campuses had a combined campus police budget of nearly $140 million in 2019-20. Some campuses are projected to have higher UC police budgets this coming academic year, including UCLA and UC Davis.

Varsha Sarveshwar, outgoing president of the UC Student Association, read a partial list of recent UC police actions against students and the campus community during the UC Regents meeting. Included were incidents such as UC police arresting a Black alumna who attempted to retrieve her transcripts during a student protest that she wasn’t a part of; charging at striking UC Santa Cruz students with batons; and using military surveillance technology on them.

“Clearly, policing contributes to a racist and anti-Black experience for our most marginalized students,” said Sarveshwar. “Think about the incidents I’ve described, and ask yourself if the police response made the situation better or worse, if they made things safer, or scarier.”

UC General Counsel Charles F. Robinson said policing will happen on UC campuses with or without UC police. That’s because “local police by law, have a right, and have the authority, to respond to security issues on the campus,” he said.

Current UC officers may not need to perform all the tasks they’re currently assigned, but “in the absence of campus police, the response would revert to local authorities,” Robinson said, adding it was “up to UC decision makers” to decide which police force they want on campuses.

The Academic Senate of the UC in June called for a drastic reduction of campus police funding and rerouting that money to study and develop other modes of campus safety practices. The senate also wants to ban firearms as standard equipment for campus police.

UC Davis Chancellor Gary S. May said that while he welcomes police reform, “I have some concerns over the idea of disarming police,” he said. “We’d like to think of Davis as a peaceful and idyllic town, but it’s clear that we are not immune to violence.”

Other campus chancellors spoke of their efforts to address police reform and campus safety, such as through a task force, advisory board with more student and faculty voice, and a campus survey.

Chair Pérez voiced his frustration that the committee didn’t provide an analysis of campus policing and how it compares to other reports on police reform, something he and Napolitano called for in a May statement following the killing of George Floyd.

He singled out UC Santa Cruz, which stated in a June report on campus policing published by the UC that its officers had sufficient and appropriate training for use of force and gear.

“That flies in the face of what I witnessed” at UC Santa Cruz earlier this year, Pérez said.

How can the pursuit of science coexist with an aggrieved community whose religious practices are undermined by that very act of scientific inquiry?

That was the question before the Regents as they heard testimony from backers and opponents of a powerful telescope that the UC and its partners plan to build. The construction project — called the Thirty Meter Telescope — is on a sacred site on the mountain of Mauna Kea on the Big Island of Hawaii.

Scientists say it’s the best place on earth to build a telescope that, once complete, can examine the earliest stars and galaxies formed after the Big Bang. Native Hawaiians who oppose the construction say the telescope is a desecration of holy land, which the Native Hawaiian people believe is the birthplace of human life.

Protestors blocked access to the main road leading to the construction site for nine months between 2019 and 2020. State and local police arrested dozens; law enforcement were also decked out in riot gear, according to coverage by Honolulu Civil Beat. Meanwhile, costs for the telescope have soared from $1.49 billion to 2.4 billion. The UC is part of an association of funders bankrolling the telescope project, together with California Institute of Technology and the scientific agencies of Canada, China, India and Japan. The UC joined the project in 2014 and has already spent more than $100 million toward it, much of it through philanthropic support. UC student activists have organized to pressure the Regents to divest from the project.

“If you go forward, you are committing genocide,” said Laulani Teale, a project coordinator at Ho’opae Pono Peace Project in Hawaii with a master’s in public health. She spoke against the project at the Regents meeting last week. “The destruction of culture and lands to which people are vitally connected, result in actual destruction of health.”

Later she added that the time for one culture “achieving greatness at the expense of another is over.”

Kealoha Pisciotta, president of Mauna Kea Anaina Hou, a Native Hawaiian organization, said opponents “will use all legal means, and if necessary, we will lay our bodies down to stop this project.”

The UC system has explored an alternative site on the Canary Islands off the coast of Morocco. UC officials told the Regents that the system has fought off lawsuits and obtained the necessary permits to begin construction there. A senior UC official said 90% of the science that would happen in Hawaii could be achieved on the Canary Islands site. But a change in location would require approval from all the other telescope partners.

Mailani Neal, a graduate student in physics, with a specialization in astronomy instrumentation, supports the project. She grew up on the Big Island, where Mauna Kea sits, and started a petition in 2015 advocating for the telescope. “Those in opposition of the 30 Meter Telescope do not speak on behalf of all Native Hawaiians,” she told the Regents.

Chair Pérez, who expressed sympathy for opponents of the telescope on Mauna Kea, faulted the presenters of the UC officials for focusing on the merits of the telescope rather than whether the Canary Islands would be a suitable alternative. He suggested the Regents’ next meeting in September will include a vote on the future of the telescope. If the UC divests from the project, the other members of the consortium behind the telescope could still pursue a site on Hawaii, said Stett Holbrook, a university spokesperson.