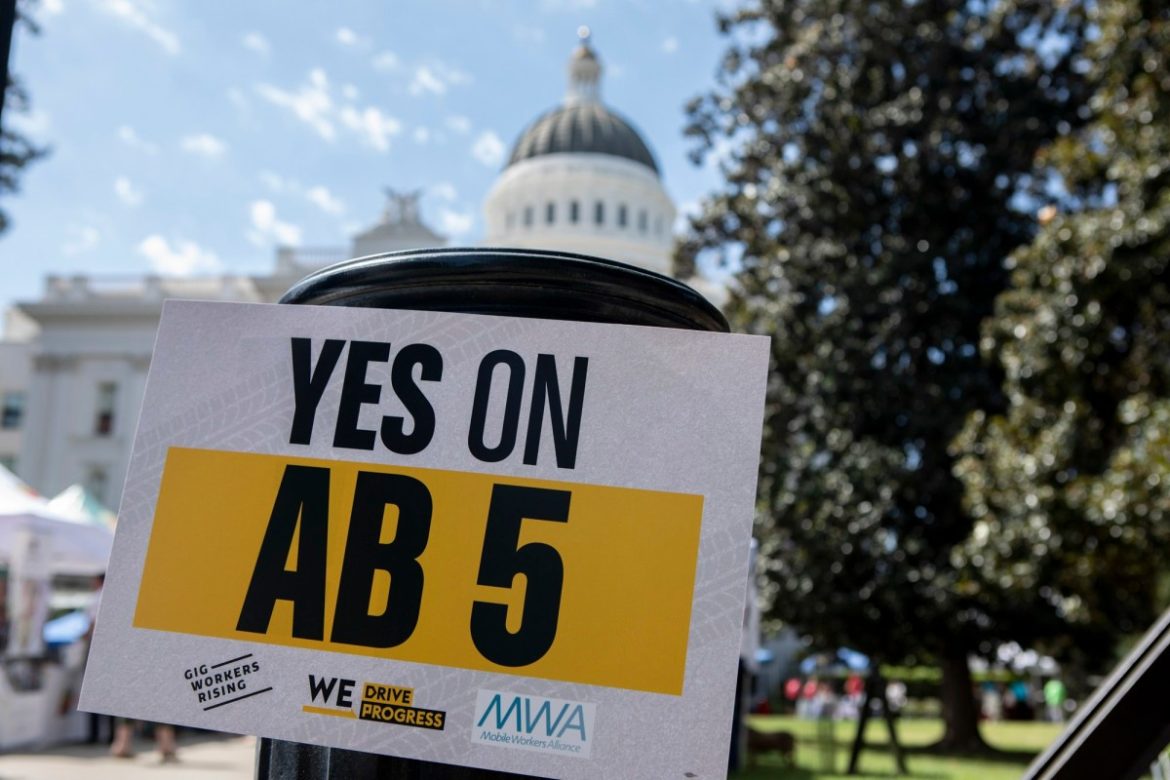 A sign supporting AB 5 posted in front of the California Capitol on August 28, 2019. Photo by Anne Wernikoff for CalMatters

The California vs. Uber/Lyft war is far from over — but Big Tech lost the first battle.

A San Francisco Superior Court judge issued a preliminary injunction Monday requiring the gig-economy companies to reclassify their drivers as full-fledged employees entitled to minimum wage, unemployment insurance, workers’ compensation and paid sick leave under the controversial state law AB 5. Uber and Lyft have 10 days to appeal, which they plan to do — though Judge Ethan Schulman said there was an “overwhelming likelihood” his ruling would prevail.

California’s clash with the rideshare giants has taken on heightened urgency amid the pandemic, with Uber and Lyft arguing that their independent-contractor model provides flexible work options and California arguing that it deprives workers of key benefits while allowing the companies to avoid paying into the state’s depleted unemployment insurance fund.

The state has multiple lawsuits pending against Uber and Lyft, including one filed last week by the California labor commissioner that accuses them of wage theft.

Uber and Lyft said reclassification would result in higher prices, fewer available rides and “hundreds of thousands” of drivers losing their jobs. It would also cost the companies — neither of which are profitable — hundreds of millions of dollars in back wages and benefits.

The companies had hoped to delay Becerra’s lawsuit until after voters weighed in on their $110 million November ballot measure that would allow drivers to remain independent contractors with some additional benefits.

Gov. Gavin Newsom on Monday refused to say whether the sudden Sunday resignation of the director of the state Department of Public Health was due to a tech glitch that led to a statewide underreporting of coronavirus cases — or the department’s failure to inform him of the issue for several days — though he said it was appropriate for him to accept Dr. Sonia Angell’s resignation, CalMatters’ Ana Ibarra reports. However, Newsom also took ultimate responsibility for the data snafu that backlogged 297,000 lab results, saying “At the end of the day, the buck stops with me.” He added the backlog was completely cleared over the weekend and the state is looking for a new lab reporting system with better capacity.

Newsom also said California can’t afford to participate in President Donald Trump’s proposed unemployment plan, which calls for states to chip in $100 of a $400 weekly benefit. The governor said it would cost the state $700 million a week and California has already spent or allocated most of its federal relief funds.

California’s prison system, which has been accused of excessive overtime spending for at least 20 years, spent nearly half a billion dollars on overtime pay in 2019 even as the inmate population shrunk — raising questions about employee burnout and patient care, CalMatters’ Raheem Hosseini reports. Psychiatric nurse-officers — who function as both nurses and gun-carrying guards, and exist only in California — were five of the top 10 overtime earners, with the No. 1 spot going to a nurse-guard who raked in nearly $186,000 in overtime pay. A decade after the dual position was eliminated, many nurse-officers are still being phased out of their roles, leading to a shortage of mental-health nurses — who in turn are forced to work overtime.

Wildfire poses a significant hazard for 35% of California’s 10,000 long-term care facilities, and many aren’t prepared to safely evacuate elderly, vulnerable residents — pandemic or no, KQED reports in an investigative collaboration, “Older and Overlooked,” with CalMatters. The state Department of Public Health found 78% of nursing homes violated fire safety and emergency planning standards over a two-year period. Meanwhile, the demand for nursing home beds is rising as the Golden State ages faster than the rest of the country — and global warming is putting more communities at heightened risk of natural disasters.

Rising seas are likely to swallow as much as $10 billion of California property in the next 30 years and could erase up to two-thirds of Southern California’s shoreline by 2100, according to a Monday report from the nonpartisan Legislative Analyst’s Office.

The report reflects the latest science, which shows faster and higher rise than previously modeled. Researchers predict seas could swell as much as seven feet in the next 80 years.