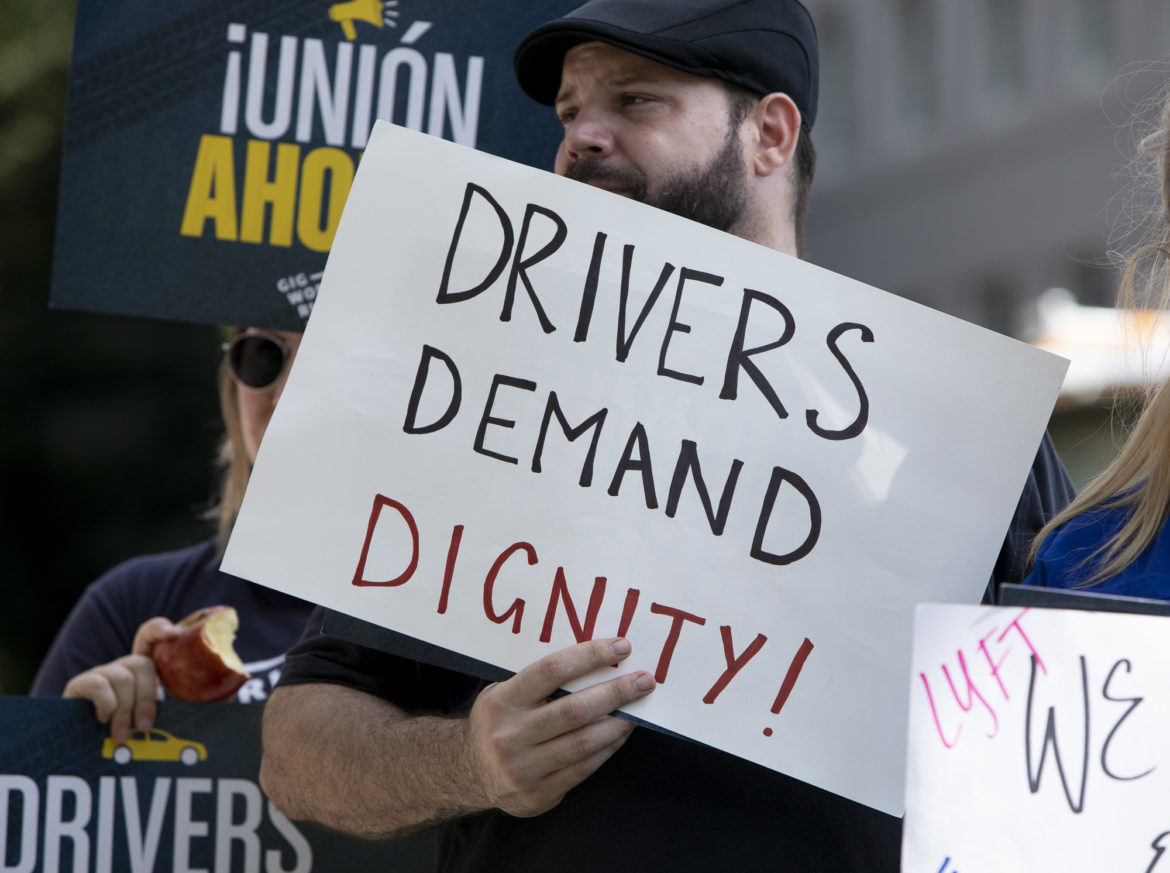 Protesters carrying signs supporting AB-5, a bill that would change the employment classification for on-demand workers such as Uber and Lyft drivers, is posted in front of the California capitol on August 28, 2019. Photo by Anne Wernikoff for CalMatters

A judge ruled that the ride-hailing giants must comply with California’s AB 5 contractor law, but legal appeals, a November ballot battle and big questions about organized labor loom large.

This week, a yearslong battle over how gig companies should treat the hundreds of thousands of Californians who find work through their apps finally came to a head. It also proved that even after high-profile protests and showdowns in Sacramento, the state is still far from figuring out what work will look like in a more tech-dependent world — and it’s testing the patience of Uber and Lyft, which are now threatening to temporarily close down in the state.

The latest clash started with a 34-page court order full of words like “nonsense,” “inconsistent” and “meritless,” where San Francisco Superior Court Judge Ethan Schulman on Monday rejected the ride-hailing giants’ arguments that they should not have to immediately comply with a new state law. The law, AB 5, in effect since January, requires companies in many industries to reclassify and pay contract workers as employees.

Lyft on Thursday filed a court notice that it will appeal the order. Uber also filed paperwork to halt the process, arguing that it would take “a year or more” to create processes to formally re-hire drivers. But if those efforts fail and they are forced to quickly change how they operate, the companies trying to stop the financial bleeding after huge losses during the pandemic say they may be forced to cut “hundreds of thousands” of contract jobs. On Wednesday, both Uber and Lyft threatened to shut down California operations until November — just in time for an election where the companies, plus gig economy peers Instacart and DoorDash, want voters to exempt them from AB 5 and approve their own proposal for more limited driver benefits, Prop 22.

“This is a blatant example of billionaires trying to buy their way out and trying to bend the rules to fit only them,” said Carlos Ramos, a 39-year-old Lyft driver in Bakersfield who is campaigning against Prop. 22 with advocacy group Gig Workers Rising.

Whether or not the court order holds, the lawsuit brought by the state, combined with voters’ decision on Prop. 22, will be two big next steps in determining the fate of California gig workers, whose ranks have swelled amid record unemployment and pandemic lockdowns that have supercharged demand for delivery. At the same time, Uber CEO Dara Khosrowshahi is pleading his case in Washington, calling in a New York Times op-ed this week for a “third way” for gig workers, between full-time employment benefits and contract work with “almost no safety net.”

For labor groups, too, the battle over gig work in California has become a litmus test for 21st-century organizing. As unions align themselves with progressive activists and call for new taxes on businesses and wealthy individuals, advocates say they also aim to replicate gig workers’ push for benefits in other fragmented and fast-growing fields, like home health care.

“We can see this spreading to other states, and that’s why this fight against Prop. 22 is important,” said Rey Fuentes, an attorney with Oakland advocacy group The Partnership for Working Families. “It really is a bellwether.”

Many drivers like Ramos who rely on gig work for the bulk of their income favor permanent protections guaranteed by AB 5, including overtime pay, reimbursement for expenses, workers’ compensation and paid leave. But Jan Krueger, a 62-year-old state retiree who drives part-time and goes by “momlyft” on Instagram, is among those who favor flexibility offered by Prop. 22, officially called the “App-Based Drivers as Contractors and Labor Policies Initiative,” like allowing drivers to work for multiple apps or earn health care subsidies tied to hours worked.

“I feel like the unions just want us to unionize,” said Krueger, who has put in 10-30 hours a week on Lyft for the last six years. “They just want to get their hands on this industry so bad.”

The question of whether gig unions may someday be possible illustrates a divide on the issue between different branches of government. While AB 5 and some court rulings say drivers should be considered employees, the National Labor Relations Board ruled last year that ride-hailing drivers are independent contractors and not eligible for collective bargaining or unionization. As it stands, California Democrats are watching how the law plays out but they could go back to the Legislature to enforce the right to unionize. Enter Prop. 22, which is opposed by unions like the AFL-CIO and would make it virtually impossible to unionize, since the measure requires a 7/8 supermajority for amendments.

In the meantime, drivers and Californians who rely on Uber and Lyft to get around are in a high-stakes limbo until Election Day. Though Uber CEO Khosrowshahi insisted on MSNBC that “it’s not a game of chicken,” the company has projected that up to three-quarters of its more than 200,000 California drivers could lose work if it is forced to comply with AB 5, and that rides will get more expensive and harder to find for customers. Uber has yet to detail when or how the drastic cuts could happen, and has used its app to lobby against regulation in the past, leaving some advocates to contend that workers are being used as political pawns.

Carlos Ramos didn’t plan on becoming a full-time Lyft driver. The military veteran was between jobs in event promotion and advertising when he decided to try driving three years ago. Soon, he was working up to 70 hours a week, often hours away in the busier Bay Area, chasing constantly changing cash bonuses for completing more rides.

Gig companies argue that they aren’t formal employers — rather, “multi-sided platforms” that offer technology to individual driver entrepreneurs — but Ramos said his story is indicative of how the apps encourage workers to put in more hours than a normal 9-to-5. “They want you to drive more,” he said. “They just don’t want to pay you more.”

In Sacramento, Krueger said her calculations driving for Lyft are different. It’s a chance to meet people and earn money to travel or help family members with bills, but she has her own health care and retirement fund to rely on. She’s so “obsessed” with Lyft’s fuzzy mustache props and hot pink branding that she got “momlyft” tattooed on her shoulder.

“I’m not a shill for Lyft,” Krueger said. “I’m super, super, super worried. I think if Prop. 22 is not successful, momlyft disappears.”

Drivers’ dramatically different experiences help illustrate why the battle over regulating gig work is still so unresolved. There’s not even a reliable neutral source of data on how many people work in the gig economy or how many hours they average, since numbers change constantly, data is held by a mix of public and private companies, and the jobs fall outside the purview of institutions like the Bureau of Labor Statistics or California Employment Development Department.

That void has opened the floodgates for conflicting information. AB 5 states: “The misclassification of workers as independent contractors has been a significant factor in the erosion of the middle class and the rise in income inequality.” Uber and Lyft have released surveys that say the majority drivers are part-time and prefer to remain independent. Other reports by labor groups find heavy reliance on drivers who work long hours, and that even part-time drivers will earn about $100 per week less under Prop. 22 than AB 5, since hours would be calculated while rides are active, not including wait time for rides.

In the meantime, gig companies are gaining political power. Uber CEO Khosrowshahi successfully appealed to the Trump administration in March to create a Pandemic Unemployment Assistance program available to drivers in lieu of unemployment insurance that gig companies don’t pay into. Some have reported issues receiving benefits. This week, Khosrowshahi’s op-ed called for ongoing “benefits funds which give workers cash that they can use for the benefits they want, like health insurance or paid time off,” rather than employer-sponsored health care or state-mandated paid leave.

Fuentes of the Partnership for Working Families said that companies’ calls for new types of benefits amount to “a form of doublespeak” to skirt regulation. Earlier this month, a judge rejected an attempt by backers of Prop 22 to change the ballot language on the measure.

For workers like Ramos, there’s also a more personal challenge: figuring out where they fit into the world of high-flying tech companies during a pandemic. “We’re not asking for stock packages,” Ramos said. “We just want to be paid fairly.”