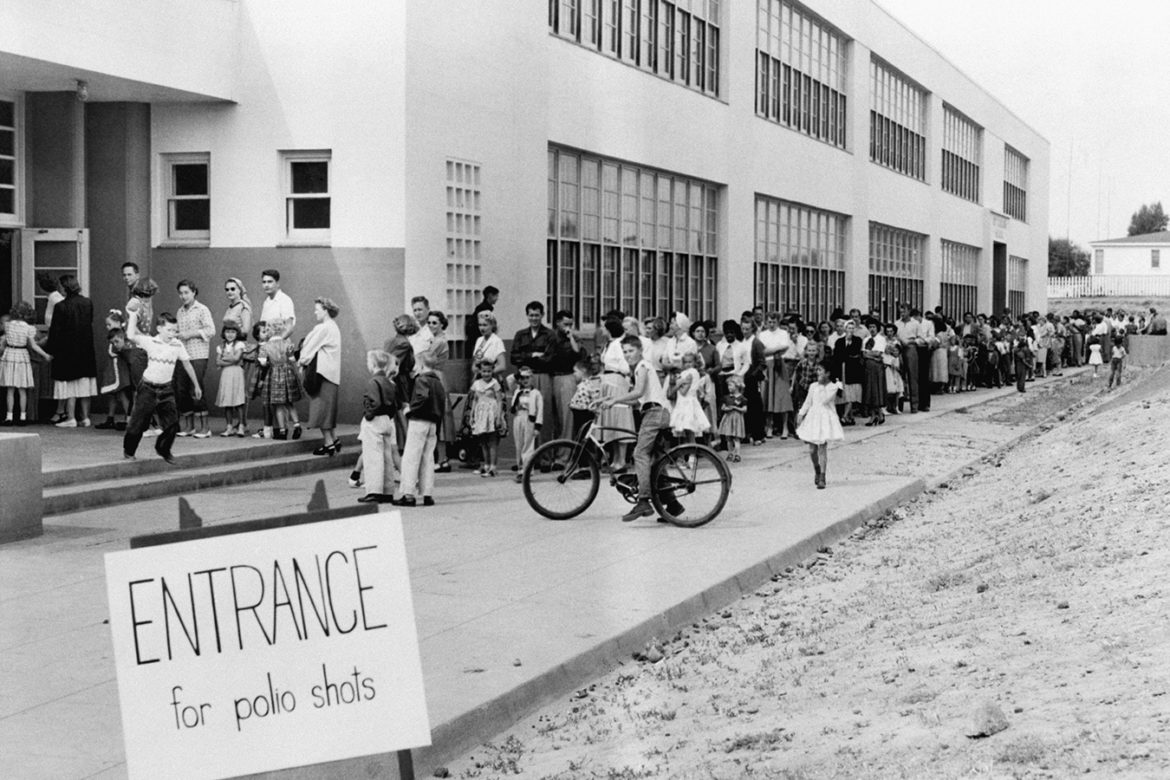 (Original Caption) 4/23/55-San Diego, California: First and second graders at the Kit Carson School here line up for Salk Polio vaccine shots April 16th. San Diego was the first community in the United States to start this Spring's mass inoculation with the serum.

Thousands of letters stuffed with money flooded Jonas Salk’s mailbox the week after his polio vaccine was declared safe and effective in 1955. Everybody wanted his vaccine. Desperate parents clogged doctors’ phone lines in search of the precious elixir; drug companies and doctors diverted doses to the rich and famous.

Some of the first batches of the vaccine were disastrously botched, causing 200 cases of permanent paralysis. That barely dented public desire for the preventive. Marlon Brando even asked to play Salk in a movie.

Eight years later, with polio a fading threat, the first measles vaccines went on sale. Measles had killed more than 400 children the year before and caused permanent brain damage in thousands more. Interest in the vaccine was modest. Its creator, Maurice Hilleman, was never lionized as Salk had been.

“People felt, ‘What’s the big deal? I had measles; why does my kid need a vaccine?’ It was a very difficult sell,” said Walter Orenstein, an Emory University professor who headed the national immunization program at the Centers for Disease Control and Prevention from 1988 to 2004.

When a coronavirus vaccine becomes available, will it be met with a roaring ovation, like the polio vaccine, or communal yawning, like the measles shot? Or some strange hybrid of the two? Americans’ trust in authority, affordable access to the vaccine and a sense of solidarity will determine the result, said Orenstein and other public health veterans and historians.

Perceptions of particular diseases — and vaccines — reflect the seriousness of the diseases themselves, but popular values, culture, human risk assessment and politics all play important roles. Acceptance of public health measures — be they face masks or vaccines — is never entirely determined through a rational balancing of risk and benefit.

We can see that in the history of national campaigns for new vaccines meant to vanquish a scourge. No disease was more feared in the mid-20th century than polio. With the possible exception of AIDS, no disease since has been as feared until the arrival of COVID-19.

The polio vaccine was one of the few the public greeted eagerly. Diseases like measles and whooping cough were familiar childhood afflictions. In most years they killed more children than polio, but polio, which put people in iron lungs and leg braces, was visible in ways that an infant’s death certificate, tucked away in a drawer, could never be.

Vaccines are often a hard sell, since they prevent rather than cure disease and seem scary even though they are generally quite safe. Since vaccines must be widely used to prevent outbreaks, successful vaccination campaigns rely heavily on trust in those who sell, recommend and administer the medicines. And trust in science, government and business has not always been in steady supply.

In the late 1800s and early 1900s, when public health laws were in flux, authorities battling smallpox epidemics would often send vaccinators out with police to enforce the jab. They’d enter factories where cases had been reported, lock the doors and frog-march the workers through a vaccination line. The workers’ resistance was not unmerited; the vaccine sometimes caused swollen arms, fever and bacterial infections. Vaccination could cost a week’s missed wages.

Authorities had learned their lesson by the 1920s, when the diphtheria vaccine came on the scene, as James Colgrove notes in his book “State of Immunity: The Politics of Vaccination in Twentieth-Century America.” Diphtheria was a much-feared killer of children, and publicity campaigns run by public health officials, insurance companies and charities sought to educate and persuade rather than coerce.

Polio terrified Americans, peaking in 1952 with more than 57,000 cases. In 1938, President Franklin D. Roosevelt, himself a polio patient, had begun a national scientific program to battle the disease, backed by millions of Americans’ contributions through the March of Dimes.

The result of this national quest, uniting government and the people, was Jonas Salk’s inactivated polio vaccine. It cemented a powerful post-World War II trust in the U.S. scientific and medical establishment that would endure for many years.

Vaccines prevent the circulation of a disease among the unvaccinated via what scientists call herd immunity — if enough people are vaccinated. When a reliable rubella vaccine became available in 1969, states quickly required childhood vaccination, even though rubella was practically harmless in children. They wanted to protect a vulnerable population — pregnant women — to prevent a repeat of the 1963-64 congenital rubella epidemic, which resulted in 30,000 fetal deaths and the birth of more than 20,000 babies with severe disabilities.

The embrace of the rubella vaccine, as historian Elena Conis of the University of California-Berkeley notes in her book, “Vaccine Nation: America’s Changing Relationship With Immunization,” marked the first time a vaccine had been deployed that offered no direct benefit to those who were vaccinated.

Still, it took a combination of fear, solidarity — and coercion — for Orenstein and his colleagues at the CDC and state public health agencies to drive childhood vaccination rates for measles, whooping cough, rubella and diphtheria to 90% and above in the 1990s to assure herd immunity.

Shame was also a tool. Orenstein remembered testifying to the Florida Legislature when it was considering a tougher vaccine mandate. He showed them that disease rates were lower in neighboring states that had tighter mandates. It worked.

What’s different now? In a politically divided nation, trust in science is low and experts are distrusted, politicians more so. Childhood vaccination efforts are already beset by large numbers of hesitant parents. And efforts to fight the COVID epidemic in the United States have been clumsy and chaotic at best, leaving Americans to doubt the competence of their governments and institutions.

There is still fear. “Maybe I’m an old-fashioned fool, but I think that most people will welcome a vaccine, if the rollout is done right,” said David Oshinsky, a professor of history at New York University and author of “Polio: An American Story,” a Pulitzer Prize-winning history. “Most people are desperately afraid of COVID. A minority thumb their noses, many of them for political reasons. How will this change when there’s a vaccine that [hopefully] changes the health risk equation to some degree?”

Recent surveys show as few as half of Americans are determined to be vaccinated against COVID-19. Those numbers could change depending on a number of hard-to-predict factors, said Conis of Berkeley.

“A lot of people will be really eager to get it,” she said. “A lot will be hesitant, not only because of misinformation but because of a lack of trust in the current administration.”

When a coronavirus vaccine is introduced, it may be sold as personal protection, even for young, healthy people. But those who suffer most from the virus are usually older or sicker. An effective vaccination campaign may try to instill a sense of solidarity, or altruism, as well as a more general sense that without vaccination, the economy can’t get back on its feet.

“I’m not clear if people accept that solidarity,” Orenstein said. “People look more for what’s good for themselves than what’s good for society.” That said, the risk of COVID-19 to young people is “not zero. That’s one of the major ways to sell this, in a sense.”