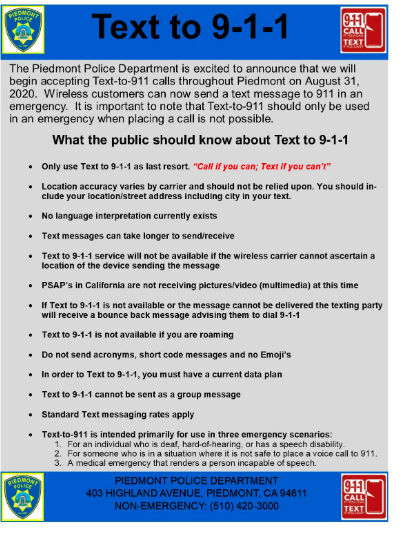 The City of Piedmont will begin offering Text-to-911 service on August 31. The emergency service allows people to text their emergency to 911.

The Piedmont Police Department said the service is intended to supplement 911 telephone calls. “It is meant to be used in instances when people cannot call 911,” Piedmont Police Support Services Commander Lisa Douglas said. “The slogan is, ‘Call if you can, text if you can’t.”

Douglas explained that the texting service is meant for people who cannot speak due to a medical emergency, who are in a circumstance where it is not safe to make a voice call, or are hard of hearing, deaf, or have a speech disability.

“One of the first questions a dispatcher is going to ask when you text 911 is if you can call 911,” Douglas said.

The service is for all emergencies, although Douglas said, “you should not text 911 if your house is on fire unless you cannot speak.”

“We are trying to stay in front of emerging technology,” Captain Monahan said. “A few other agencies are doing this and we want to be able to provide this same service to residents and guests. Cell phone users are texting at an increasingly high rate and we want to make sure anyone can contact 911 in any form available, including those that might have a messaging service, but not a cell phone.”

The system has been tested and generally a text goes to the nearest cell tower, according to Captain Monahan. Location accuracy can vary wireless providers, so someone texting 911 should include their location information including city in the text. The system will work outside Piedmont if a city or location has the text to 911 service set up. If it doesn’t, a bounce-back message will be sent telling the person to call 911.

Language and interpretation services are not currently offered via text. You cannot send a picture or video. Standard text messaging rates will apply.

California enacted A.B. 1168 about a year ago requiring cities to offer Text to 911 by January 1, 2021. It is unknown if all cities will have it set up by then.