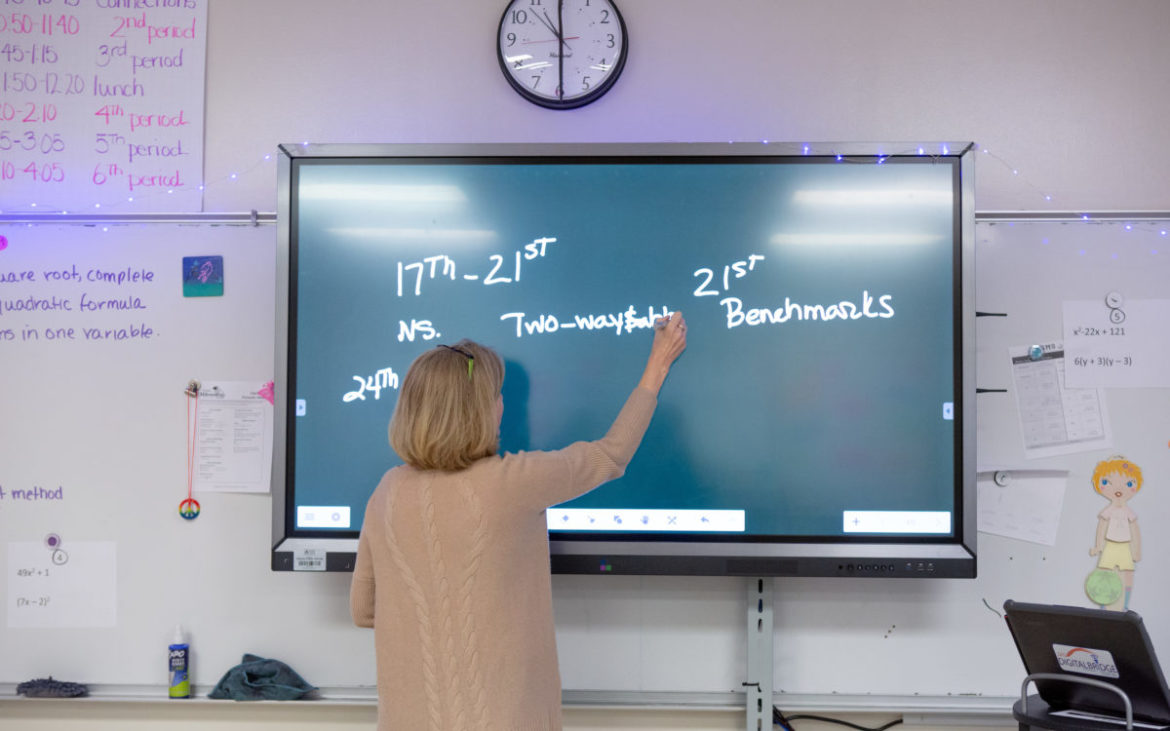 PHOTO BY ALLISON SHELLEY FOR AMERICAN EDUCATION: IMAGES OF TEACHERS AND STUDENTS IN ACTION

The Legislature set minimum hours but left it to districts and unions to define instruction, engagement and set the length of a school day.

Add fraying nerves of school district and teachers union negotiators and parents worried about distance learning to the collateral damage of the pandemic.

Never, say those involved, have talks over teacher working conditions been this challenging.

Gov. Gavin Newsom announced in July that school districts would not open for in-person instruction in counties with rising Covid-19 infection and hospitalization rates. There are currently 38 counties on the state’s monitoring list.

The prospect that a return to schools may not happen until winter or beyond has raised the stakes of getting distance learning right. There’s strong agreement that it must improve on the slapdash version that many students experienced when schools closed amid the pandemic in March.

“We anticipate staff responsibilities and expectations to be more involved and rigorous than those required under the emergency school closure,” said the California Teachers Association in the preface to a sample contract sent to local teachers unions.

But bargaining on what distance learning should look like, along with disagreements over side issues, like paying for teachers’ child care, has proved problematic, and agreements don’t go far enough, said Wesley Smith, executive director of the Association of California School Administrators.

“I am encouraged by some agreements, but overall, I am worried for our students’ learning,” he said. “We cannot afford to lose a year and three months of quality academic instruction. If we don’t have the rigor and intentionality that we have with in-person instruction,” then there won’t be quality instruction for all students, he said.

An underlying, often unstated, tension has been disagreement on which reopening and distance learning issues can be bargained. All districts have a contract with teachers that spells out the length of the day, instructional time and staffing issues like job transfers. Most districts view curriculum decisions as their prerogative.

At the same time, changes in work conditions are bargainable, and a pandemic, forcing a shift to district learning, poses a huge change. So that has created gray areas and a lot of push and pull in negotiations. Prolonged talks in some districts have delayed the start of teacher training in distance learning.

“School districts must guarantee the safety and health of students and employees and negotiate when working and learning conditions change,” CTA President E. Toby Boyd said in an interview this week.

“There has been no other experience I have had where the line between what is negotiable has been as terribly blurred,” said Gregory Dannis, president of San Francisco law firm Dannis Woliver Kelley, who represents more than a dozen Bay Area school districts. “And CTA has been advising locals to push the line because of the impact on safety.”

Changes in work day hours, restrictions on recording lessons and how — and if — teacher evaluations are performed are among the issues covered by existing contracts that appeared in union proposals for distance learning, he said.

In a 10-page sample contract with language demanding safety protections and setting working conditions under all reopening scenarios, the CTA said, “It is an understatement to say that bargaining, and reaching lasting agreement, in the current environment are very difficult.”

“Chapters have the moral high ground in this fight. Use that to the advantage of our members, students and communities,” the CTA document said.

And cite the existing agreement to your advantage, it advised. “Almost everything the district may want to do or attempt to change will likely already be covered by your collective bargaining agreement, if not directly at least tangentially. Make informed decisions” about whether to agree to changes or to enforce existing rights.

Bargaining appears to have gone better in districts with strong working relationships, such as San Juan Unified, with a history of collaboration. “What is bargainable was not really an issue,” Brown said. District leaders and teachers broke into work groups “as partners” and co-created drafts of side letters to the contract in Google Docs for joint editing.

“Both parties have been working to create clarity and consistency on what is expected in a way that helps our system be better and not gain an advantage over each other,” she said.

But in districts with longstanding tensions, negotiations have been acrimonious. In Oakland Unified, the teachers union started school on Monday without an agreement on some fundamental issues. The district is proposing to maintain the current 6½ hour work day, while the Oakland Education Association is proposing to reduce it to 5, with 1½ hours of teacher wellness activities. The union is proposing to adopt the state’s minimum instructional hours, while the district wants to add 45 minutes in grades 4 to 12, including more live instruction.

Working less than current requirement would be a contract violation, but, with talks continuing, the district hasn’t pressed the issue.

Citing a lack of progress after two months of talks, Chris Evans, superintendent of Natomas Unified, near Sacramento, pushed back the start of school by two weeks and sent out an email to 1,200 employees on July 23, criticizing the teachers union for playing “games” and threatening to impose a distance learning plan consistent with the terms of the existing contract. That prompted quick talks and a memorandum of understanding on remote learning by the end of the day, Evans said.

Within the past week, a number of large districts and their teachers unions — Los Angeles, West Contra Costa and San Diego — have announced they’d struck deals. And more are expected.

In other districts, with the opening of school quickly approaching, teachers and district administrators are feeling the pressure of the clock and the anxiety of parents who want normalcy and predictability in their children’s schedules.

For weeks, negotiators have been haggling over variations of the same questions:

In terms of daily schedules, the differences among the ratified agreements involve the range between the minimum time for instruction, a floor that the Legislature set in June, and the maximum workday in existing contracts, generally 6½ to 7 hours.

Having heard parents’ complaints that in many districts students had little direct contact with their teachers last spring, legislators set minimum standards for instruction for 2020-21 in a bill accompanying the budget: 3 hours and 50 minutes a day for first to third grades and 4 hours for fourth to 12th grades on a 180-day school calendar. The standards do not spell out how much of that instruction is live interaction between students and teachers.

A coalition of civil rights and student advocacy organizations had urged Newsom and lawmakers to require a minimum of three hours of daily face-to-face instruction. But the Legislature did not distinguish between live interaction, including small group discussions, and students’ independent offline work, so that became a contentious negotiating issue.

The Legislature also required that districts take daily attendance, set up procedures to reach students who are online fewer than three days each week, and include efforts to teach English learners.

“Virtual instruction involves a huge learning curve for both teachers and students, and remote instruction did not go well last spring,” said Robin Lake, director of the Center on Reinventing Public Education at the University of Washington Bothell, which is tracking reopening plans for hundreds of districts and charter school nationwide. “MOUs have to ensure things go better this fall.”

She said an agreement ensuring students get what they need would include at least 3 hours of live online instruction daily, professional development for all teachers, regular check-ins and virtual home visits with students and a parent or guardian, intensive tutoring support for struggling students, plus diagnostic assessments.

Agreements reached over the past week in San Diego, San Jose and San Juan contain many of those elements, although San Juan gives teachers more flexibility to determine the mix of online and offline learning.

What matters most, said Brown, is a student’s engagement time throughout the day to meet their specific needs — whether individual meetings with social workers and counselors, small group sessions for English learners and other resources beyond the classroom, she said.

Yet for all of the energy and time it took to reach a deal on distance learning, agreeing on when to physically return to school promises to be even more contentious. That issue, for now, is simmering.

Teachers and administrators all say they want to return to the classroom as soon as it is deemed safe. But who determines what is safe, for which students and how many of them, and under what conditions?

In an agreement reached Wednesday, Palo Alto teachers and the district agreed on all issues concerning distance learning. But they continue to disagree on the school year; the Palo Alto Educators Association wants in-school instruction to begin no sooner than January; the district wants the option to begin in October, if Santa Clara County is no longer on the state watch list for high infection and coronavirus hospitalization rates.

Superintendent Don Austin wants to be able to bring students with disabilities, foster students and other high-priority students back to school early in small groups. The union has rebuffed the idea.

San Jose Unified Deputy Superintendent Stephen McMahon has expressed a similar interest. It is among a few districts that are asking teachers to conduct remote learning from their empty classrooms, to enable them to access high-speed broadband, tech support and to signal to students that school is still open and awaiting their return. Many other districts had proposed the same idea, including Los Angeles Unified, but retreated amid strong pushback from teachers fearful of possible Covid exposure. At the same time, United Teachers Los Angeles negotiated to send children of teachers to school for district-funded child care.

Last week, CTA president Boyd said his organization would oppose any waivers for K-6 schools to open in counties being monitored by the state for high rates of the virus.

Under state guidelines issued last month, districts can apply to open elementary schools under certain conditions even in counties on the state’s monitoring list.  Boyd reiterated that schools should not be reopened unless they are safe to return to.

The CTA’s requirements for safety — masks and social distancing in schools, continuous deep cleaning, inspections of ventilation systems, monitoring of student and employee health by nurses and trained medical personnel — are extensive and would require more funding, Boyd said. The state is not close to meeting another requirement: extensive contact tracing of individuals exposed to someone who tested positive.

Due to all those factors — plus teachers’ continuing fear of exposure — districts can expect another tough round of bargaining once their counties come off the state monitoring list.

“Concentrating on distance learning helped to move us forward in the short run, but issues around the return to school will be there 6 weeks from now,” said Dannis, of Dannis Woliver Kelley.