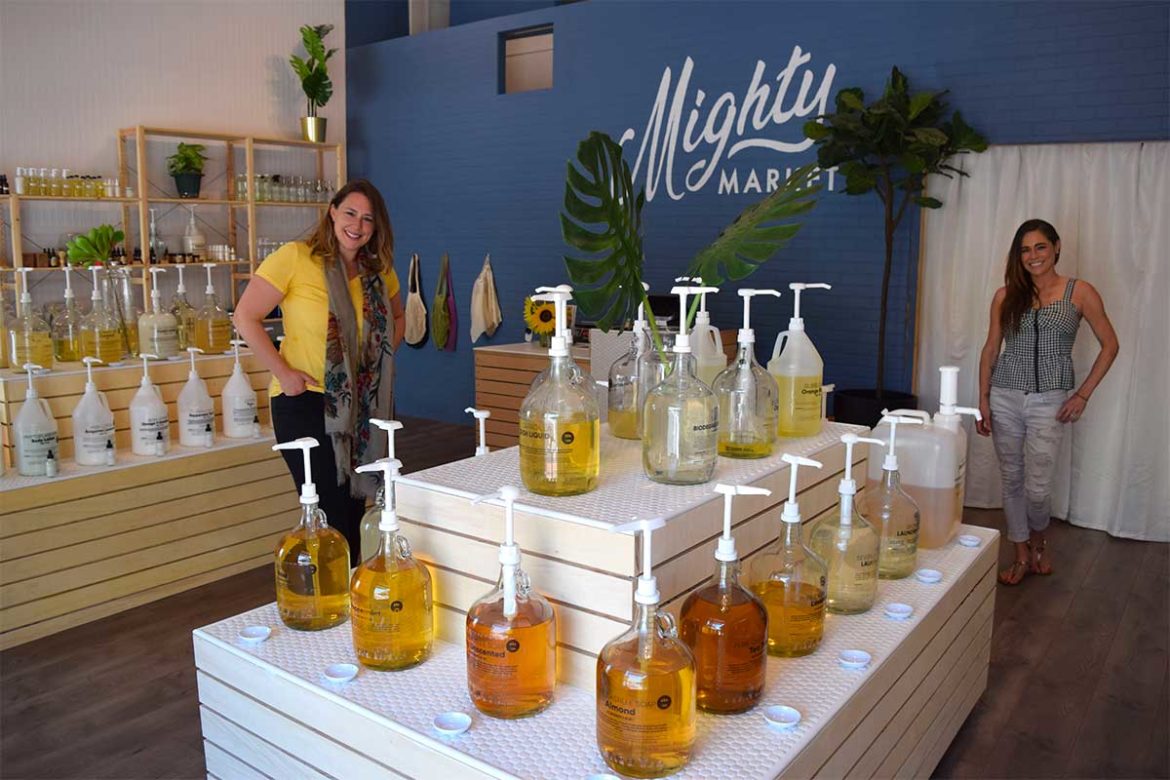 Like many before her, Bronwyn Kopacek came up with a good idea while in the shower.

“I was standing, looking at all the plastic shampoo and conditioner bottles … and I was thinking it was so wasteful,” said Kopacek, who with her sister Claire Martinez started Mighty Market in downtown Martinez. “And the chemicals in them, there are about 20 ingredients too many, and you can’t pronounce half of them.”

Mighty Market bills itself as a low-waste business, meaning it sells most of its beauty and health care products — body lotions, shampoos, moisturizers, coconut oils and other items — in bulk or in bio-friendly containers, producing as little waste as possible, whether recyclable or headed to a landfill. Many of the products are plant-based.

At refill stations in the store, customers pump products into their own containers they bring, and they are charged by the ounce.

“You can bring any kind of container you want, and I’ve seen some weird ones,” Martinez said. “We’ve had deli containers and others.”

Most of Mighty Market’s products, including things like toothbrushes, toothpaste, balms, cloths, hygiene products and others, are made with environmentalism in mind. Bamboo toothbrushes don’t add plastic to the waste stream, and “tooth tabs” — basically toothpaste pills that explode in one’s mouth — sidestep the usual metal roll-up tubes and plastic dispensers.

The store was set to open on March 18, but a Contra Costa County health order shut down most retail businesses amid the COVID-19 pandemic days earlier.

Kopacek said that prompted a pivot to online sales, which weren’t part of the initial business plan. But online business has gotten Mighty Market in the game, with regular customers around central Contra Costa and beyond.

As far as they can tell, their business is the only one of its kind in the area east of the Caldecott Tunnel. In addition, they say almost all the products they sell are made in the Bay Area; their store sells two items made by clinical herbalist and fellow Martinez resident Anna Marie Beauchemin and her East Bay Health business. Kopacek hopes to sell items by other local vendors soon.

“You can bring any kind of container you want, and I’ve seen some weird ones. We’ve had deli containers and others.”Claire Martinez, Mighty Market

Community relationships appeal to Martinez and Kopacek, who said the downtown Martinez business community has embraced them.

Kopacek and Martinez grew up in Cape Town, South Africa, came to the U.S. as young girls and have lived mostly in the Bay Area ever since. Both now with young families, they’ve lived in Martinez for a few years, and their parents have lived there for 16 years.

So, before COVID-19 wreaked its havoc, they had been watching downtown Martinez waking up in recent years, Kopacek said.

“Everyone who’s doing something down here, they’re all adding to the energy,” Kopacek said.

And as for the name “Mighty Market,” Martinez and Kopacek said it comes from the original 200-square-foot version of their store, which they described as “small but mighty.”

The women moved to a slightly more spacious 800-square-foot spot next door a few weeks ago and celebrated its grand opening Wednesday.