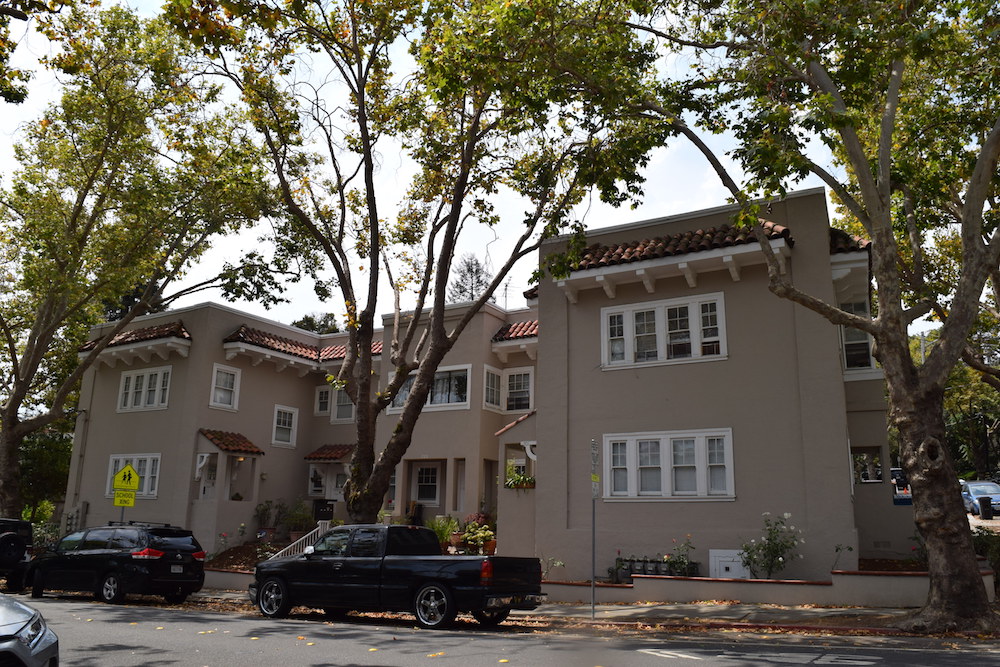 Multifamily building at Linda and Kingston

Local leaders don’t yet know how many new housing units the city will be told to prepare for over the next decade, but said Monday that Piedmont’s small size and mostly built-out status could make large numbers a tall order.

But at the same time, some Piedmont City Council members said Monday night that it may be time to make some long-resisted changes, in the name of not only being a good Bay Area municipal neighbor, but to help further racial and economic equity.

That, councilmembers, city staff and consultants said, may well mean Piedmont will need to build more units, and different kinds of units, than have traditionally been built there.

“It may be time we look at types of housing that we’ve never approved,” Vice Mayor Teddy Gray King said. “It may be a new reality for us.”

Councilman Tim Rood agreed, calling the decades-old development of housing in Piedmont the result of “racist government policies,” and that his city shouldn’t continue to resist change as some wealthier Bay Area communities have done.

“The landscape is shifting under our feet,” Rood said.

But it will likely be at least a year before Piedmont officials know how much housing they’ll be expected to plan for over the following 10-year period.

Similar discussions are happening all over the Bay Area, as all cities and counties in California must prepare a General Plan Housing Element every eight years. All Bay Area cities and counties must adopt their  2023-2031 housing element documents by January 2023.

These “housing element” documents must show that a city or county can accommodate what is determined to be its “fair share” of the region’s housing needs — about half of them for either low- or very-low income — and is working to meet those needs through its policies and programs.

Piedmont’s “fair share” is determined by the Association of Bay Area Governments (ABAG) through a process called the Regional Housing Needs Allocation. The proposed Bay Area regional allocation for the 2023-2031 cycle is 441,176 units, more than twice the total for the 2015-2023 housing needs cycle.

Piedmont officials have been told their “fair share” number for 2023-2031 will also be significantly larger than it was during the previous eight-year allocation cycle. Piedmont’s 2015-2023 number was 60 units; the 2023-2031 numbers for Piedmont and other cities from splitting up the 441,176 units are still being calculated.

A city report  estimates Piedmont now has the capacity to add approximately 100 housing units relatively easily. It also says that if the Piedmont’s new-housing share is determined to be between 100 and 200 new units, that the city will have to make more use of the relatively small number of “underutilized properties” in areas zone for multi-family uses, and offer more incentives for property owners to set up accessory dwelling units, particularly for low- and very-low-income households.

If Piedmont’s allocation turns out to be 200 or more housing units, the city report says, “more aggressive measures will need to be considered.”  Under one of ABAG’s possible methodologies, Piedmont could be required to show it can accommodate as many as 800 new housing units.

Barry Miller, a consultant hired by the city, told the council Monday night that if the required ABAG numbers are high enough, measures to meet the demand could include converting public property into housing, rezoning or allowing denser development in areas already zoned for residential uses.

Such discussions in some Bay Area cities during planning for the 2015-2023 housing cycle were acrimonious; citizen groups in Lafayette, Danville and Orinda were loud in their displeasure with plans for then-current plans for high-density (apartments and/or condos) developments in those downtown areas. Miller said that, until it’s known what Piedmont will be asked to accommodate, it’s impossible to know what community reaction will be.

“Obviously, some of these suggestions are controversial, and would require a lot more community discussion, even a ballot measure if zoning is changed,” Miller told the council.

Piedmont has 3,929 existing single-family and ADU housing units and 50 apartments.

In a related action Monday, the council approved spending  $160,000 from a state grant received in November to hire San Francisco-based Lisa Wise Consulting to help plan for plans and incentives for building accessory dwelling units, and to develop design standards for mixed-use and multi-family development.

Regarding the housing element plan, the council told City Administrator Sara Lillevand to communicate with ABAG Piedmont’s concerns about the appropriate methods for determining the city’s long-term housing obligations.