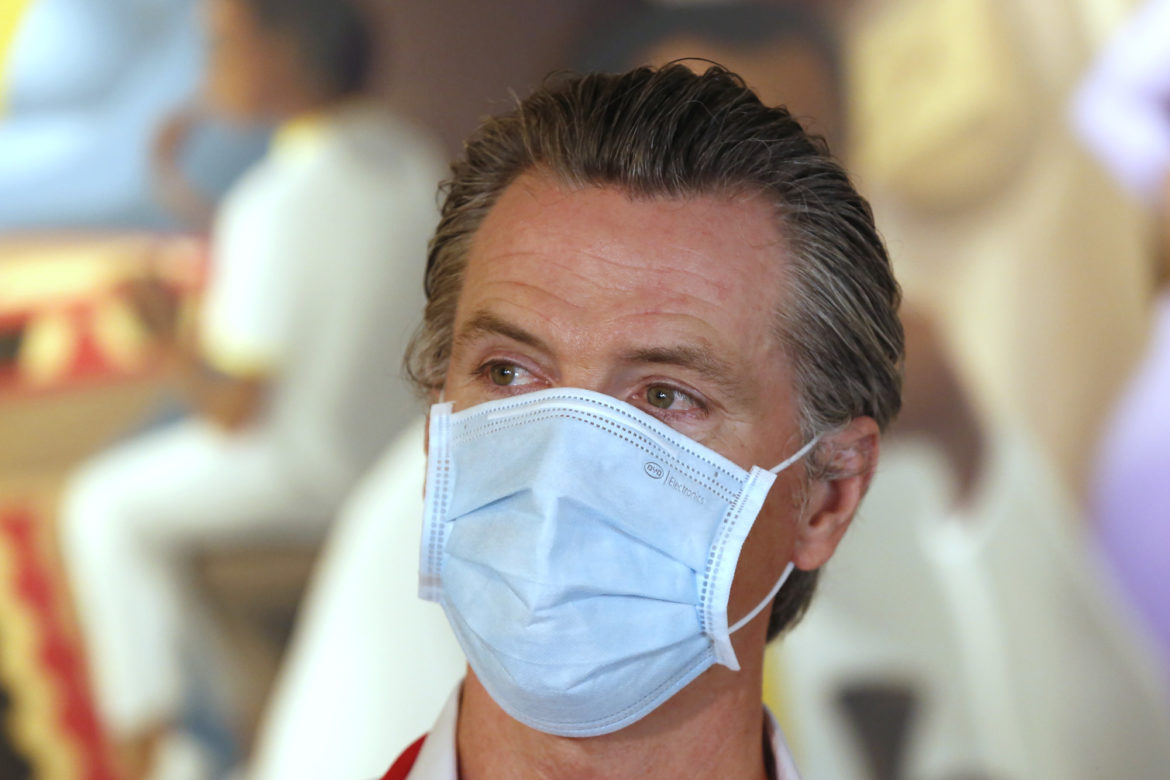 Gov. Gavin Newsom, wears a face mask as he answers a reporters question during his visit to the Queen Sheba Ethiopian Cuisine restaurant, in Sacramento, Calif., Friday, June 19, 2020. Newsom visited the restaurant that is participating in the Great Plates Delivered program that provides meals to older adults who are at-risk to COVID-19. (AP Photo/Rich Pedroncelli, Pool)

The news came a few days after Santa Cruz was also removed from the watch list, though outbreaks continue to flare in the Central Valley and in some rural counties — including five added to the watch list Monday.

Hundreds of hair salons, barbershops and tattoo parlors across the state pledged to reopen for indoor service Monday — exactly five months after they were first shut down — and stay open as long as possible.

Meanwhile, two private Christian schools in Fresno County reopened in defiance of state orders, and another in Sacramento reopened under the guise of day care. Some California schools are holding day care programs in their classrooms, where students work on distance learning under the supervision of a substitute teacher.

Schools are eligible to reopen in counties that stay off the watch list for 14 days, though day care and elementary schools can reopen under different conditions — uneven and contradictory standards in the eyes of some superintendents and elected officials.

The coronavirus bottom line: As of 9 p.m. Tuesday night, California had 632,667 confirmed coronavirus cases and 11,342 deaths from the virus, according to a CalMatters tracker.

Newsom declared a state of emergency Tuesday in response to more than 30 wildfires raging across California amid a record-setting heat wave that caused the state’s first rolling blackouts in nearly two decades. The Golden State is now dealing with two official statewide emergencies — and the coronavirus pandemic is complicating some residents’ fire evacuation efforts.

Though California managed to avert blackouts Monday night — despite predictions of a massive energy shortfall — the manager of the state electric grid said Tuesday outages were “imminent.”

Both Newsom and lawmakers promised sweeping change in the wake of George Floyd’s death at the hands of Minneapolis police — but will anything materialize before the legislative session ends in less than two weeks? Lawmakers are currently considering at least 15 police reform bills, but one that would permit cop decertification is likely doomed, while another that would involve the attorney general in certain deadly force investigations is facing new opposition, CalMatters’ Raheem Hosseini reports. And amid a massive budget crisis that has led the state to tap into its rainy day fund, lawmakers are weighing whether California can afford the price of reform.

3. How California progressives are handling a virtual convention

Normally the Democratic National Convention, which runs through Thursday, would be an opportunity for progressive California delegates to push their party — and presidential and vice-presidential nominees Joe Biden and Kamala Harris — left. But it’s a little harder to cause a ruckus or stage a walkout over Zoom, which has given the party more control of its message, CalMatters’ Ben Christopher reports. Nevertheless, California progressives are still getting their point across, with U.S. Rep. Ro Khanna of Fremont voting last week against the party’s platform, largely because it didn’t include Bernie Sanders’ Medicare-for-All proposal. Khanna was named co-chair of California’s delegation in June amid pressure from progressives — typically, that honor goes to the governor. Still, many of Sanders’ California delegates said they plan to vote for Biden in November.