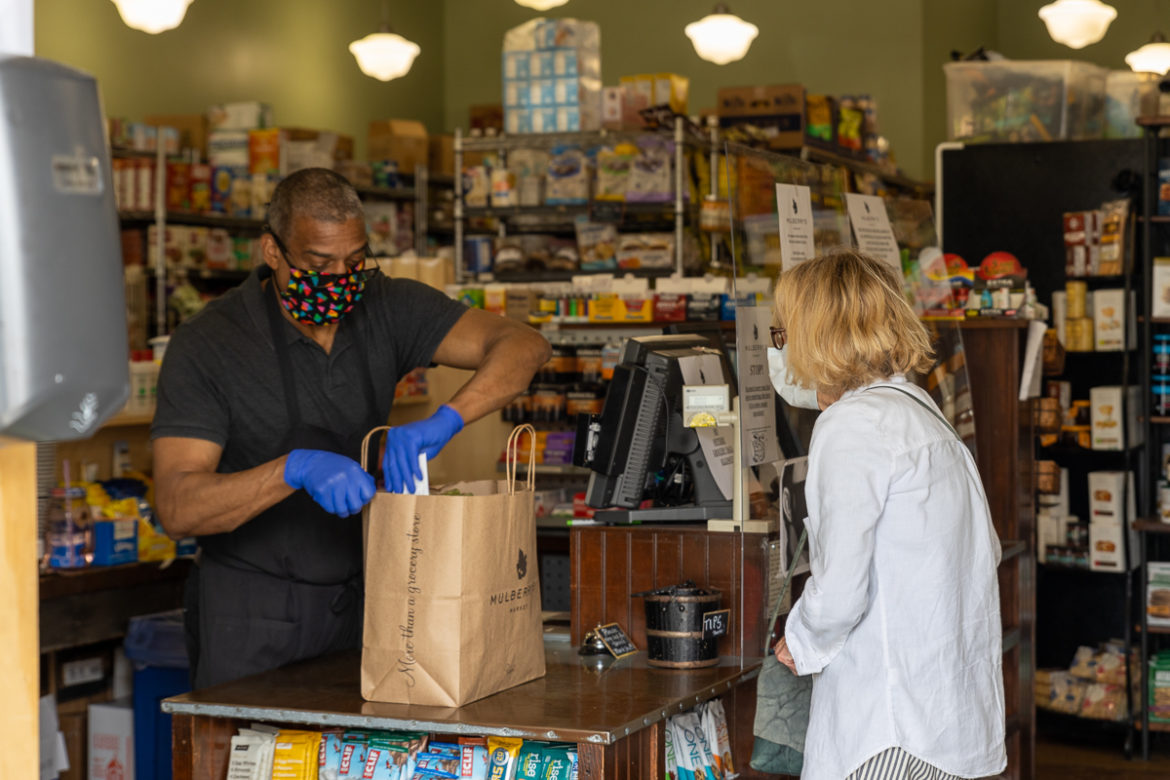 A shopper at Mulberrys during Covid-19

Gov. Gavin Newsom announced a revamped statewide process Friday for counties to reopen things like businesses and schools during the COVID-19 coronavirus pandemic.

Counties will be placed in one of four tiers – Widespread, Substantial, Moderate and Minimal – based on their rate of the virus’ spread. Each tier corresponds with thresholds for a county’s rate of new cases per 100,000 residents and the rate of positive tests, Newsom said.

The Widespread category, in which counties are placed when they have more than seven new cases per 100,000 and a positivity rate of more than 8 percent, will replace the state’s COVID-19 monitoring list to signify counties with the worst virality rates in the state.

“We hope (the new framework) is not only more dynamic but it’s much more simple to understand,” Newsom said. “(But) stringent, nonetheless, in terms of its application.”

San Francisco and Napa counties are the only two in the greater Bay Area that are not in the Widespread tier, sitting in the Substantial tier instead.

The tier system will go into effect Monday at the same time that hair salons and barbershops will receive a green light from the state to begin operating indoors with modifications statewide, regardless of which tier their county sits within. Previously, salons and barbershops had only been allowed to operate outdoors for counties on the monitoring list.

Much like the previous system, schools will not be allowed to resume in-person instruction until the county they’re in has moved out of the Widespread tier.

Reaching each tier of the new system, Newsom said, will take far more time to ensure a county is truly snuffing the virus’ spread in an effective way. Counties can only progress one tier at a time toward a larger reopening, and counties that progress from one tier to another must remain in their new state for at least 21 days. A county must also meet the next tier’s case and positivity rate thresholds for at least 14 consecutive days before they can progress from a higher tier like Widespread to Substantial.

Newsom said state health officials had recognized that the previous attempt to reopen in late May and June had been too lenient at the county level.

“We put out guidelines,” Newsom said. “They didn’t mean go, but we empowered the counties to make decisions based upon attestations and partnerships that had to form with county health officers signing off with county officials on their ability to move.”

“We’re going to be more stubborn this time,” he said. The state’s first attempt at reopening led to increased spread of the virus in June and July. The state’s coronavirus hospitalizations spiked during that time, from 3,142 on June 4 to 7,170 on July 21.

Since mid-July, when the state clamped down on indoor operations at businesses like bars, movie theaters and restaurants, statewide hospitalizations have fallen to 4,205, as of Thursday.

State Health and Human Services Secretary Dr. Mark Ghaly said focusing on case and test data is a way of catching the virus earlier than hospital data allows. “We know that when you find a case today that it has a chance to end up in the hospital three, four weeks down the road,” he said, adding, “we still maintain that those hospital numbers are very reliable.”

Newsom also announced that the state has redesigned its coronavirus hub website, covid19.ca.gov, and added a “What’s Open” tool that residents can use to see which tier their county is at and the operating status for businesses like restaurants, zoos and retail stores.

Newsom said the state plans to launch a pair of public service announcements in English and Spanish to highlight the danger of spreading the coronavirus and flouting the state’s health guidelines to wear a face covering and keep distance from others.