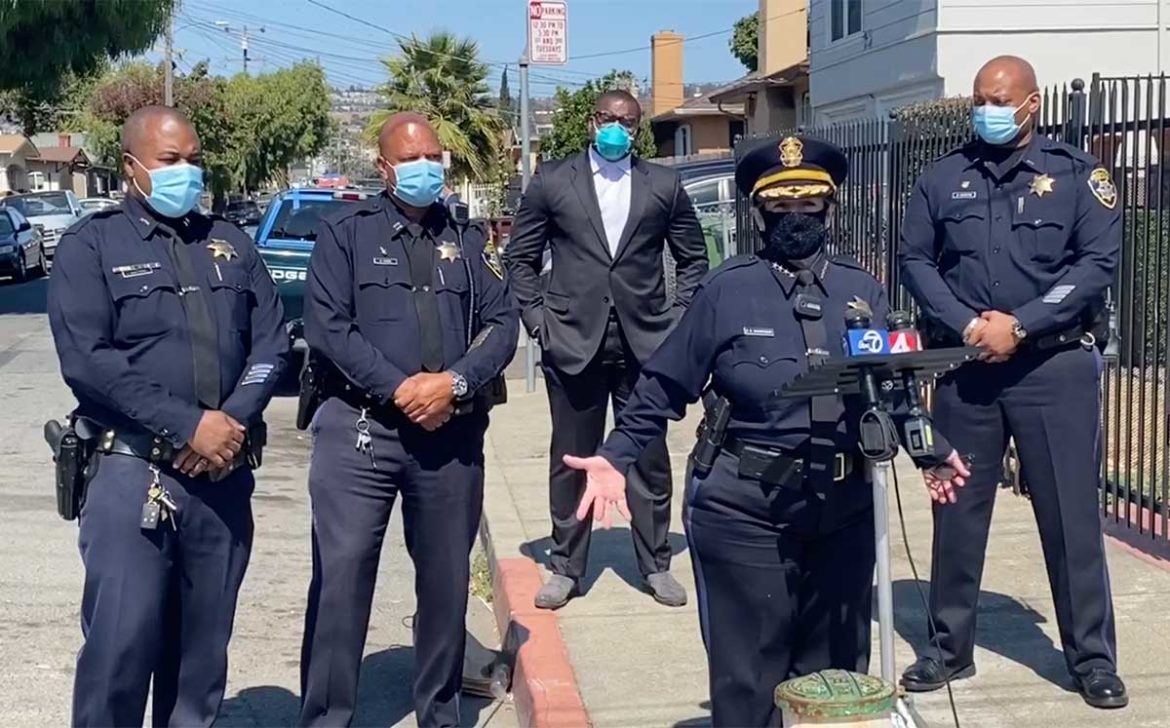 Oakland interim police Chief Susan Manheimer addresses the city's violent crime statistics during a news conference last week. Despite an uptick in homicides this year, Manheimer said her department has solved nearly half of those cases and has seen shootings and homicides decline by 50 percent during the past five years. (Photo courtesy of Oakland Police Department)

Oakland police have launched an initiative to stem the rising violence in the city, police officials said.

OPD Cares kicked off Friday afternoon at at 8500 International Blvd. with members of the community encouraged to join in.

Part of the initiative involves officers on foot and bicycle patrol, in patrol cars and on motorcycles to provide safety. The mobile command center will be used as a resource center, serving neighborhoods, with officers handing out masks.

“Working together, our community cut gun violence in Oakland by 50 percent in just five years,” Oakland Mayor Libby Schaaf said in a statement. “We must continue our vigilance to reduce trauma and anguish caused by acts of violence.”

The uptick in violence comes as the City Council voted to establish a task force devoted to reimagining policing in the city and to reducing the police budget by 50 percent, with the money going to alternatives for public safety.

The effort appears to have broad community support. Police are concerned that their resources are already stretched thin.

Police said any effort to reduce violence requires the help of the community. Police will be deploying more resources to the parts of the city where the most violence is occurring.

Work continues through the Police Department’s Ceasefire program, which has reduced crime, according to police, by identifying gangs and groups behind the crime.

Last week, interim police Chief Susan Manheimer said police need to come up with other strategies to the mediation that was taking place with gangs and groups behind the violence because police are struggling to convene those talks during the pandemic.

But the Rev. Michael McBride isn’t clear why. McBride is the director of the Live Free campaign with the Faith in Action network, which aims to address gun violence and the mass incarceration of young people of color.

He wondered why police cannot use personal protective equipment to meet with the gangs and groups.