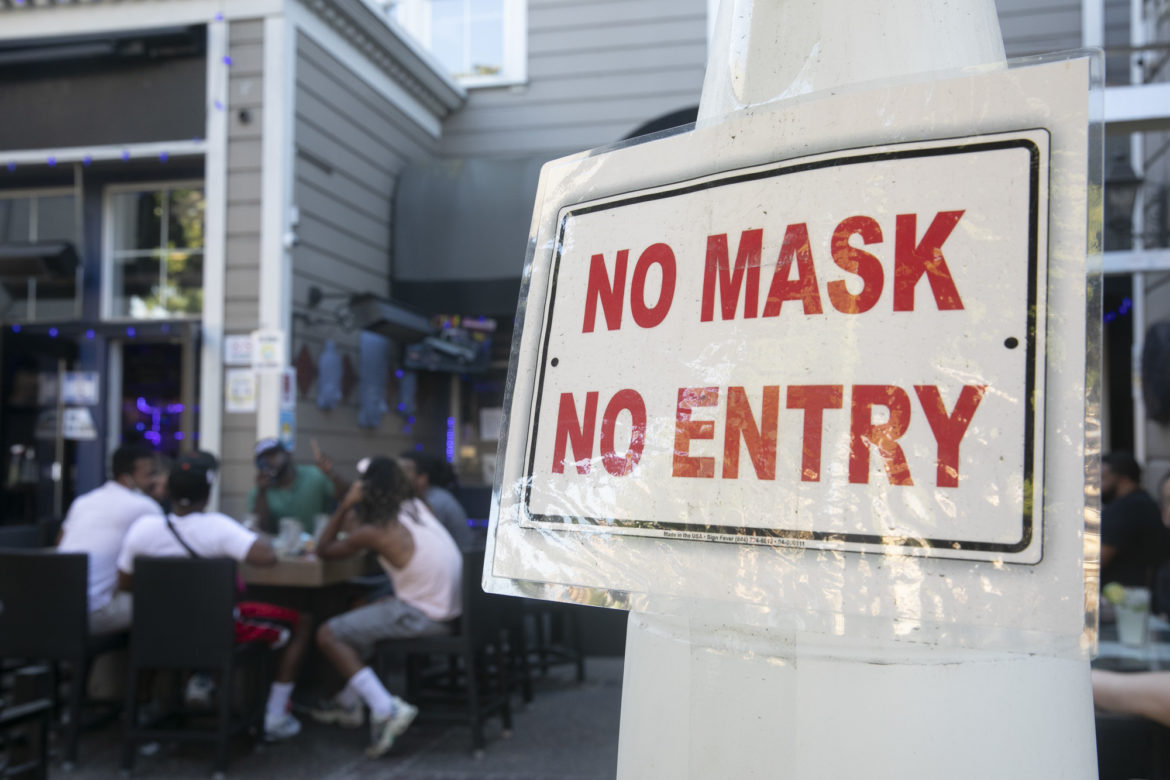 A sign requiring customers to wear a mask is posted outside Modern China Cafe in Walnut Creek on August 16, 2020. Photo by Anne Wernikoff for CalMatters

Despite a statewide order to wear masks, there’s no statewide penalty for not doing so. Local governments have instituted their own fines for violations, but critics worry that enforcement will disproportionately affect people of color.

California’s governor may have issued a statewide mask order in June to protect against COVID-19, but whether you could be fined for not wearing a face covering depends a lot on where you live.

Taking a stroll down Rodeo Drive in affluent Beverly Hills? A code enforcement officer could slap you with a $100 fine. In Compton, you’ll get a warning first, then a fine of $500 for a second offense. Los Angeles County, home to more than 10 million people, plans to start fining noncompliant businesses at the end of August; the county has shuttered 95 businesses for failing to obey the county’s mask and social distancing orders.

Even less populated Yolo County, next to Sacramento, will fine individuals up to $500 and businesses up to $10,000 for noncompliance, although there is a grace period of up to a few days, so you could simply pull a mask out of your pocket and put it on. San Mateo County supervisors recently passed a fine of $100 for a first violation.

“If you don’t wear your face mask, then you should be fined,” San Mateo County Supervisor David Canepa said in a press release. “If we want to return to normal and save lives then we must wear face masks, it’s that simple. But since many continue to thumb their noses at or do not understand these mandates, we must … let people know if you violate the law there will be consequences.”

Most public health experts now believe universal mask-wearing is one of the most effective ways to contain the spread of COVID-19, yet masks remain intensely politicized across the country, turning into a flash point for verbal tirades, even assaults.

More than 30 states have instituted mask orders, but some conservative governors have argued against them. Georgia Governor Brian Kemp, for example, drew harsh criticism in July when he banned local governments from instituting mask orders; on Friday, he reversed his policy.

In California, Orange County became a flash point when its health officer resigned after receiving death threats over her countywide mask order. County supervisors appointed a new officer who rescinded the order in mid-June. Since then, a number of cities in the county, including Irvine and Costa Mesa, added fines for residents and businesses to their existing mask mandates.

There is no statewide fine for not wearing a mask or social distancing. But as California’s COVID-19 cases surge above 621,000 and some residents openly refuse to wear masks, local governments are mindful that state officials could withhold up to $2 billion in state and federal money if they don’t actively enforce the state’s public health orders.

Many of the local mask fines have been adopted so recently that municipalities haven’t amassed data on complaints or money collected. Some are starting with warnings and education. The city of Costa Mesa hasn’t fined anyone since instituting $100-and-up fines in late July for individuals not wearing a mask, city spokesman Tony Dodero said.

A Compton city employee said the mandate was too new to report the number of citations. Beverly Hills has cited 103 individuals and businesses since the city’s fines took effect, city spokesman Keith Sterling said, but he could not provide information on the amount of money involved or whether there were repeat offenders.

Sterling said the mask mandate would be enforced mostly in the city’s business district, not in less-crowded residential areas; a resident would not be cited for walking around their block without a mask, for example.

Typically, local governments have classified mask citations and fines as an administrative infraction rather than a criminal misdemeanor. Local leaders have tapped code enforcement officers in addition to police to patrol business districts and issue fines.

Anecdotal reports and emerging data suggest that in some communities, police may be more likely to cite black and brown people for failing to abide by mask or social distancing orders. Critics have pointed to numerous arrests during recent protests over police brutality, while other large gatherings of mostly white people, including protests against masks and stay-at-home mandates, were largely left alone.

“It’s something that’s on our radar and something we’re taking very seriously,” said Tifanei Ressl-Moyer, an attorney and Thurgood Marshall Civil Rights Fellow at the Lawyers Committee for Civil Rights of the San Francisco Bay Area.

Ressl-Moyer pointed out that although mask fines are considered administrative, Californians who can’t afford to pay can enter in a cycle of late fees and ultimately, even an arrest warrant for nonpayment.

In Beverly Hills, for example, late fees for failing to pay a fine — usually within 20 days of being cited — can rise to double the amount of the initial fine after several months. A person who has been fined can apply for a hardship waiver but must provide tax returns or a pay stub to prove inability to pay.

Compton’s fines — starting at $500 after a first warning — struck many commenters on social media as too high given that about one in four city residents live in poverty. Fines for a first or second offense in some other, wealthier cities are lower.

“You have people out here struggling and you going fine them $1,000,” one commenter wrote on Twitter. “I understand the importance of wearing a mask but where the $1,000 going come from if you can’t work.”

“There are many dangerous repercussions that city and county leadership should be aware of,” Ressl-Moyer said. “In our dialogues with elected officials, what we’re discovering is that people don’t understand when enacting these laws is what it means to live in poverty. For some folks a fine of $100 is unpayable.”