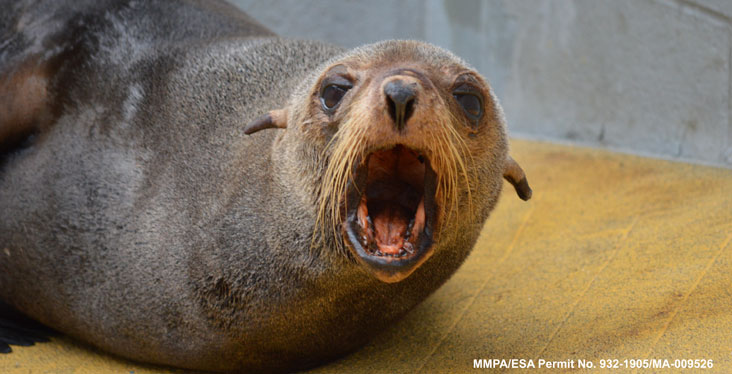 The Guadalupe fur seal (Arctocephalus townsendi) was listed as threatened under the Endangered Species Act in 1985. They have a very limited range along the coast of California and Mexico. (Marine Mammal Center website)

Marine biology experts expressed concern this week over a spate of life-threatening marine mammal entanglements in ocean garbage and fishing gear along the California coast.

The Marine Mammal Center in the Marin Headlands has admitted eight California sea lions and Guadalupe fur seals since June 1 with entanglements of varying degrees. The number of admissions is in line with previous years, according to the Marine Mammal Center, but veterinarians have been concerned by the severity of the entanglements, which can inflict deep lacerations and inhibit an animal’s ability to find food.

“It’s especially alarming to see these preventable entanglements in Guadalupe fur seals because this species is still recovering from the brink of extinction,”

A pair of entanglement studies from 2009 and 2017 found that roughly 25 percent of the Guadalupe fur seals admitted to the center between 2001 and 2015 were dealing with the effects of being tangled in ocean trash.

Two of the Guadalupe fur seals admitted to the center were recently released back into the wild in the Point Reyes National Seashore after spending roughly six weeks rehabilitating. The center received the two pups from its partners at the Northcoast Marine Mammal Center in Crescent City after they were found malnourished and tangled in fishing nets.

Not every animal the center rescues recovers, however. A yearling female California sea lion that was rescued in July had a monofilament fishing line wrapped around her head and through her mouth, according to the Marine Mammal Center. X-rays of the sea lion’s head showed a severe lower jaw fracture and an infection due to the fishing line, which had made it difficult for her to eat for weeks. The center’s veterinarians made the hard decision to euthanize the sea lion due to her injuries.

Field said the demand grows every year for the center’s support for marine mammal rescue and entanglement response.

“Ocean trash knows no international boundaries so it’s critical as the world’s largest marine mammal hospital that we help support and build the network of response organizations dedicated to tackling the issue of ocean trash and the conservation of these important species,” she said.