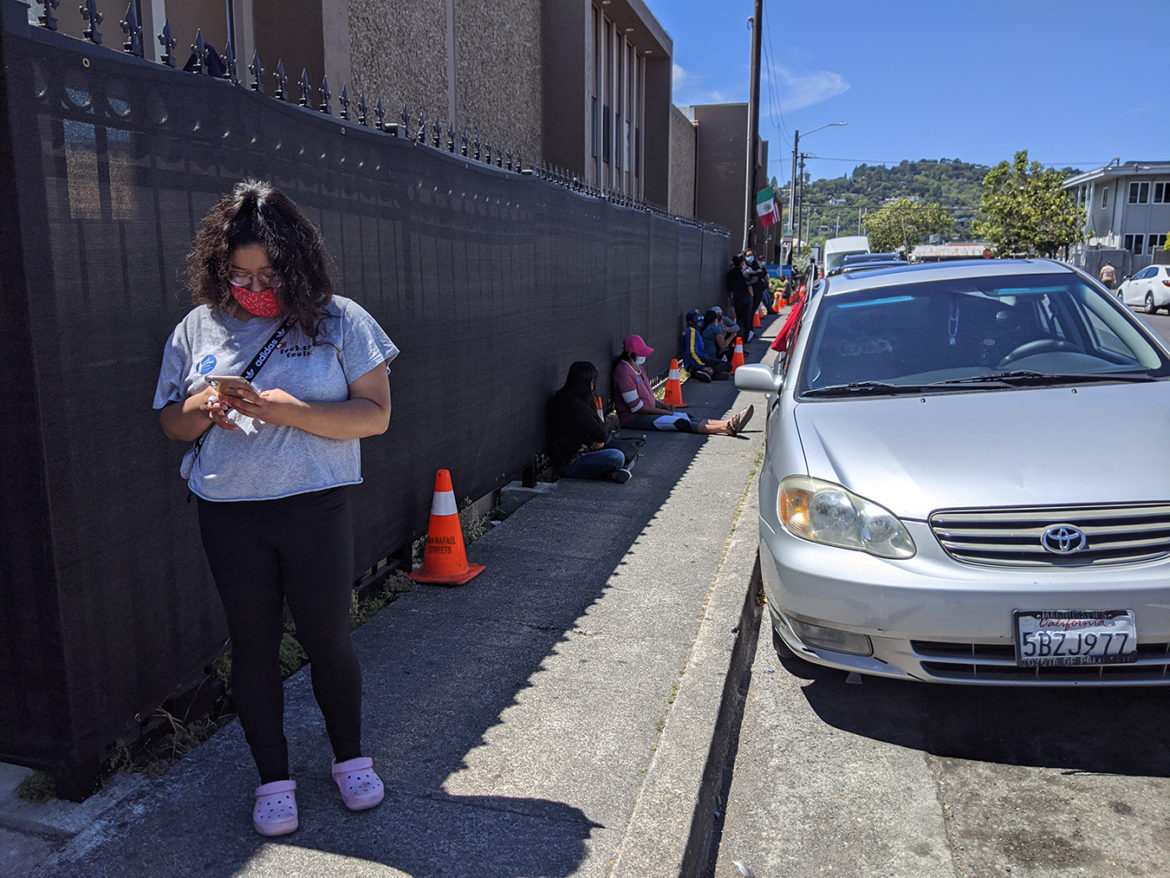 Jennifer Tores, a lifelong resident of the Canal, arrived at the local COVID-19 testing site at 8 a.m. to get in line. The neighborhood is one of the most heavily tested communities in the state, say health officials, who are struggling to control the spread of the coronavirus. (Photo by Rachel Scheier)

On a warm evening in late June, people flocked to alfresco tables set up along this town’s main drag to sip sauvignon blanc and eat wood-oven pizza for Dining Under the Lights, an event to welcome Marin County residents back to one of their favorite pastimes. About a mile away, Crisalia Calderon was hunkered down in her apartment facing a sleepless night as she grappled with the early symptoms of COVID-19.The 29-year-old house cleaner and her husband, Henry, a construction worker, both suffered terrible back pain, and she struggled to breathe. “Every time I tried to sleep, I felt like I was drowning,” she said recently, speaking in Spanish through an interpreter.

A few days earlier, Henry had called her sobbing from a hospital emergency room after testing positive for the coronavirus. The couple and their three small children share their Canal neighborhood flat with Crisalia’s sister and her four family members. “He didn’t want to come home,” she said. “But what could we do? Where could he go?”

At home, Henry tried to isolate himself in the top bunk of one of their kids’ beds. But it was too late. Within about a week, all but two of the 10 people in the household had tested positive for COVID-19.

Low-income communities of color — especially Latinos — are increasingly bearing the brunt of the coronavirus pandemic in California, where spreading infections among poor service workers living in crowded conditions has highlighted widening racial and economic inequities. These disparities are particularly stark in idyllic Marin, where a surge of new COVID-19 cases concentrated in one crowded Latin American neighborhood has helped land the county on the state’s pandemic watchlist.

Latinos, who are 16% of the county’s population, account for 75% of coronavirus infections — closer to 90% since mid-June, according to Dr. Matt Willis, the public health officer for Marin County. After recording only a handful of coronavirus cases in the early months of the pandemic, the county now has the highest per capita rate in the Bay Area.“This is our essential workforce,” said Willis. “This isn’t the result of casual socializing at happy hour.”

The Canal, named for the waterway on its northern border that was once San Rafael’s commercial waterfront, is a flat, densely populated district in a Bay Area suburb famous for its wooded hillside hamlets and multimillion-dollar vistas. The Canal’s 2½ square miles are dotted by auto shops, scruffy palm trees and rows of low-slung apartment buildings occupied by immigrants from countries such as Mexico, Guatemala and El Salvador. An influx of young Latinos has nearly tripled the neighborhood’s population since the 1990s.

“It’s like a Hispanic village where everybody knows everybody else,” said Jennifer Tores, 22, a Canal native who works at a discount clothing store.

The laborers of the Canal are both a world away from and intimately connected to well-heeled towns like San Anselmo and Tiburon, where they clean mansions, wax Teslas and steam milk for $6 lattes. More than half of families in the neighborhood earn less than $35,000 a year, in a county where the median income is almost triple that. People are often squeezed two or three families to an apartment in order to afford Marin’s infamously high rents. The Calderons live paycheck-to-paycheck to cover their half of the $2,100 monthly rent while also managing to send money back home to relatives in Guatemala.

Willis said such living arrangements “can easily translate one case of COVID-19 into five or 10.”

Even more contagious than the virus is the misinformation that’s spread quickly through the Latino community, including a rumor that local testing sites were infecting people and claims that beer is a cure.Confused and isolated at home in quarantine for several weeks with her entire family, Crisalia Calderon began to worry. “I was getting really scared,” she said. “We were running out of food and money.”

She spent hours dialing county officials and local nonprofits, but no one called back. Finally, someone at a community organization promised to deliver meals to the family, but all that arrived the next day was some expired ground meat and a few potatoes.

So Calderon turned to the same informal safety net she’d relied on in the rural village she left at 16 to migrate north. A fellow Guatemalan neighbor went to Costco and brought her ibuprofen for the aches and fever, and diapers and PediaSure for the kids, who are 5, 3, and 2. Someone else brought vegetables, milk and beans from a Latin American market. After three hours on the phone, Calderon managed to qualify for $500 in state coronavirus aid for undocumented residents.

Willis said officials are working with Canal Alliance, a neighborhood group, to provide support to residents who contract the virus — in the form of cash and hotel rooms to isolate the infected. The county is recruiting bilingual contact tracers from the Latino community.

Marin is one of California’s healthiest, wealthiest and best-educated counties, and  one of the most segregated. The county has fiercely preserved its natural beauty and wide-open spaces over the years — often at the cost of public transit and affordable housing.

A 2012 report on Marin County by the American Human Development Project showed that fewer than half of adults in the Canal had a high school diploma. It ranked the neighborhood’s nearly 12,000 residents dead last among the county’s 51 census tracts for community well-being and opportunity.In light of these disparities, it’s not surprising that people like Calderon are falling through the cracks, said Omar Carrera, Canal Alliance’s CEO.

“These people were in survival mode before COVID-19,” Carrera said on a recent afternoon, standing before a mural that adorns the group’s headquarters. People had been lining up since 7 a.m. for free coronavirus testing that began at 1 p.m. Health officials are scrambling to keep pace with demand for tests as infections have surged and employers such as gas stations and grocery stores have started requiring workers to be tested regularly.

An average of 20% of Canal tests are coming back positive. Some days, the positivity rate has been as high as 40%, said Willis. With many of the infected showing few or no symptoms, the virus has raced through this relatively young community.But people around here have to go to work, so life continues mostly as usual in the Canal. Day laborers still gather in the parking lots at dawn; vendors set up at street corners beneath colorful umbrellas to hawk roasted corn or bags of fruit.

Conspiracy theories continue to multiply; one circulating in Spanish on social media holds that the virus was a government conspiracy. Another says local testing sites are reusing dirty test swabs to deliberately infect people. The rumors have fed a climate of fear and silence around the virus.

One resident said neighbors painted an “X” on the front door of a friend of her husband’s to warn others he was infected. Crisalia Calderon and her family have all recovered and since tested negative for COVID-19, but still, “there are neighbors who run away from us,” she said. She waits until late at night to do the laundry in her building, when no one else is around.

The other day, Calderon decided it was finally time to ask her landlord to come to her apartment to fix a long-festering plumbing problem and some broken burners. But he said he couldn’t come. He was home sick with COVID-19.