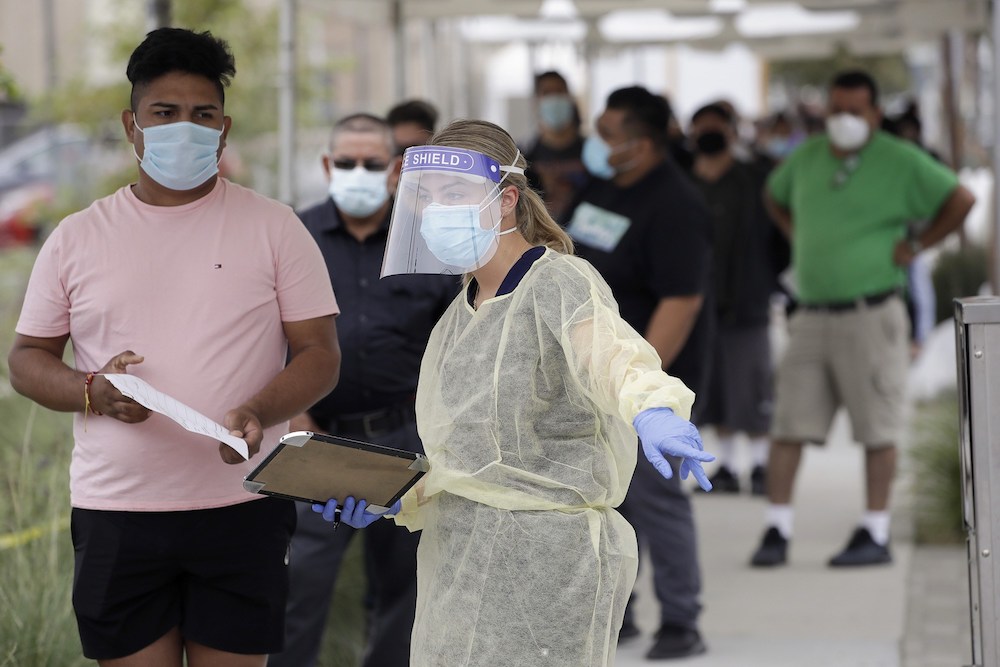 People line up behind a health care worker at a mobile coronavirus testing site at the Charles Drew University of Medicine and Science in Los Angeles on July 22, 2020. A technical problem has caused a lag in California's tally of coronavirus test results, casting doubt on the accuracy of recent data showing improvements in the infection rate and number of positive cases, and hindering efforts to track the spread, the state's top health official said today. Photo by Marcio Jose Sanchez, AP Photo

California’s daily count of COVID-19 cases appears to be falling, but that may be due to underreporting caused by technical issues, state health officials said today.

“We’ve discovered some discrepancies,” said Dr. Mark Ghaly, the state’s health and human services secretary in a press call. Data, he said, is “getting stuck” in the electronic system that feeds information from test labs to both the state and local public health departments.

This means counties and the state are not getting a full picture of who and how many are testing positive. That lack of information hampers the counties’ ability to investigate cases and initiate contact tracing, Ghaly said.

“There is no doubt that their ability to address in a timely way specific cases around case investigation and contact tracing is limited,” Ghaly said. This is on top of the high volume of cases that already were overwhelming counties’ efforts to conduct timely and effective investigations and tracing.

And “the seven-day positivity rate is absolutely affected by this,” he added.

On Monday, Gov. Gavin Newsom gave Californians a glimpse of good news, reporting a drop in the state’s seven-day positivity rate to 6.1%. Days and weeks before, the state had been steadily reporting that, on average, anywhere from 7% to 8% of tests were coming back positive.

A spokesperson with the California Department of Public Health said in an email that the state is still assessing the magnitude of the undercount, but did not say how many days the system was buggy.

This technical issue, however, does not affect the hospitalization or intensive care unit numbers, which also have seen recent declines, state data show.

“Laboratories continue to report test results directly to providers and hospitals, and hospitalization and death rates are not impacted as they are reported directly to the state through different systems,” a department spokesperson said in a statement.

Ghaly said it is unclear how long it will take to resolve the underreporting. A team from the department of technology is looking at the issue, and the state has instructed all labs to manually report positive cases to local public health departments, according to a state public health spokesperson.

In the past, testing backlogs and other slow reporting have resulted in delayed data, which is in part why health officials often look at the longer, 14-day average, Ghaly said.

“We often don’t see high numbers on Monday mornings because Sunday becomes a slower reporting day for a lot of operational issues,” he said.

CalMatters health care coverage is supported by a grant from the Blue Shield of California Foundation.