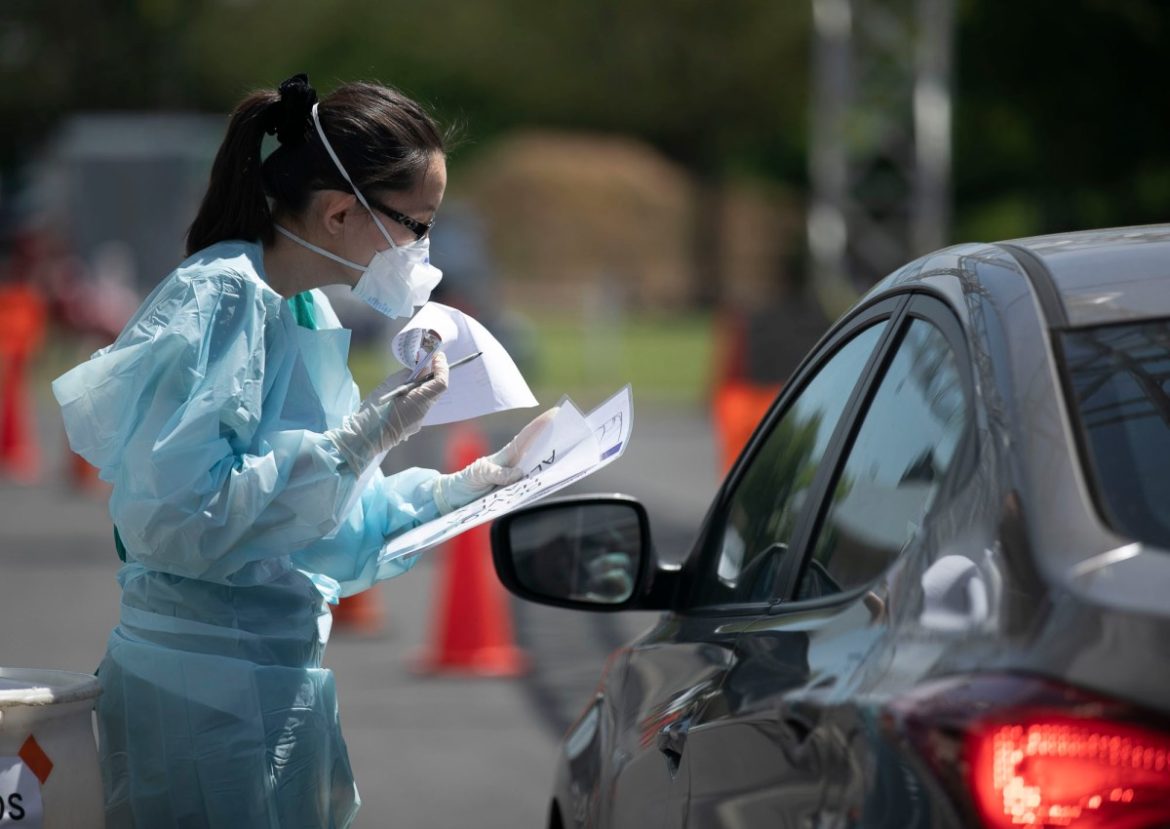 A nursing student does patient check-in and hands out requisition forms allowing patients to get their COVID-19 test results online at Cal Expo in Sacramento. Photo by Anne Wernikoff for CalMatters

Gov. Gavin Newsom announced that the state will soon more than double its coronavirus testing capacity, a move that at least one legislator described as a “game changer” in the state’s pandemic response.

The state will partner with the Massachusetts-based diagnostics company PerkinElmer, which will allow the state to conduct and process an additional 150,000 tests a day with expedited test results in 24 to 48 hours.

“We have provisions in the contract to guarantee that turnaround time,” Newsom said.

Currently, the state is processing just slightly over 100,000 tests per day with an average turnaround time of five to seven days. By some estimates, like those by scientists at the Harvard Global Health Institute, California should currently be doing upward of 220,000 tests a day to truly mitigate spread of the virus— and significantly more to suppress it.

“Each and every day is a precious day in terms of test results,” Newsom said. The longer people wait, those test results are almost useless in terms of helping stop the spread, he said.

Newsom said the state will aim to get a new laboratory facility running by Nov. 1, just in time for the peak of flu season and a possible second wave of coronavirus, when more people are likely to seek out testing.

This deal also means testing will be more affordable, Newsom said. Currently, a coronavirus diagnostic test costs anywhere from $150 to $200. That’s an “extraordinary” cost when you take into account the state has done some 11 million tests, he said. At 150,000 tests a day, the new contract would cut down the per-test cost to $30.

The goal, the governor said, is to “flex” the state’s “market muscle” and bring down testing costs, as well as improve testing access for everybody.

“This is exactly what the federal government should be doing,” Newsom said.

More and quicker testing also means the state can improve contact tracing efforts, a step that is essential to reopen schools and businesses, said Sen. Richard Pan, a Democrat from Sacramento who joined Newsom today via a call.

“Without that, we’re not going to be able to contain the outbreak,” Pan said.

Some county officials, for example, have said the days-long, sometimes weeks-long wait times for test results hinder their investigation and contact tracing efforts. As of last month, some counties were skipping over cases that were considered too old.

This also means the state should be better able to do more testing in high-risk communities and populations that have been significantly affected by the virus. Latinos, for instance, make up a large portion of essential workers. They also make up 60% of the state’s cases and almost half of all deaths, even though they’re only about 40% of the state’s population.

Newsom’s new plan to test more people comes as the Centers for Disease Control and Prevention this week updated its testing guidelines, which ultimately go in the opposite direction of California.

The modified CDC guidelines state that individuals who have been in close contact with an infected person but are not presenting symptoms, do not necessarily need a test unless they are otherwise vulnerable. Previously, the CDC recommended testing for all close contacts of infected persons.

Health officials and groups have said these recommendations ignore the role that asymptomatic role people play in the spread of the virus, and in California several health officials have already pushed back.

“I don’t agree with the new CDC guidance. Period. Full stop,” Newsom said today in response to a media question. “We will not be influenced by that change.”

At a separate media briefing at the same time today, Dr. Sara Cody, who directs Santa Clara County’s public health department, expressed anger and astonishment at the new CDC guidelines. “When I first heard about this change in guidelines … I actually didn’t believe it, for it seemed entirely bizarre. It undercuts our very basic tenets of how we control an infectious disease,” she said.

Like Newsom, Cody said emphatically that the county’s testing recommendations would not change.

“If you have been in contact with someone who’s infected with COVID, you absolutely need to get a test,” Cody said.