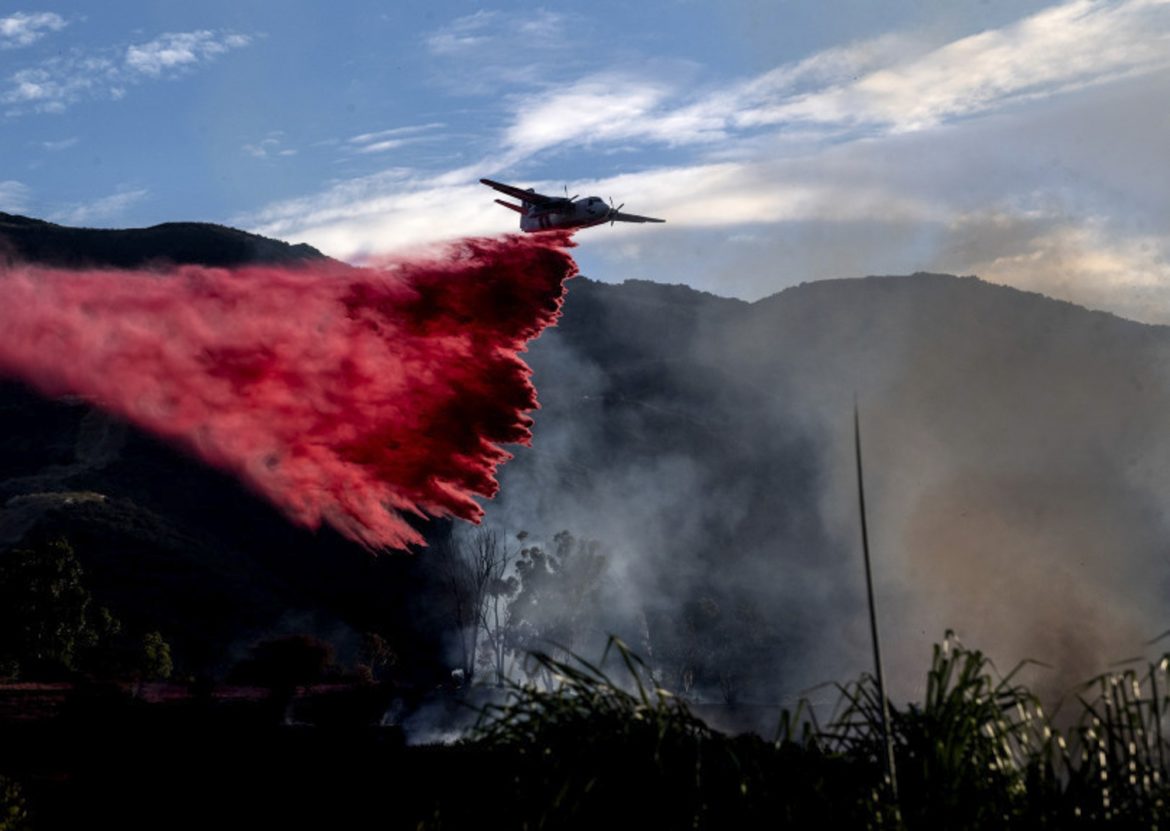 The Skyline fire burns near Foothill Parkway and Skyline Drive in Corona on Thursday, Aug. 13, 2020. Residents cheers each time a drop is made. (Photo by Cindy Yamanaka, The Press-Enterprise/SCNG)

Disasters abound in California right now. Fires raging across the state have forced thousands to evacuate, put a severe strain on firefighting crews, and contributed to poor air quality amid a scorching heat wave that led to blackouts. Oh, and there’s also the global pandemic.

Lightning struck California more than 10,849 times in the last three days, and at least 367 fires are actively burning, 23 of which are major, Gov. Gavin Newsom said Wednesday. Some — including the CZU August Lightning Complex in the Santa Cruz area, the LNU Lightning Complex near Vacaville and the Carmel Fire — remain 0% contained. (For more, check out the Los Angeles Times’ fire map.)

Cal Fire, the state firefighting agency, recently beefed up its ranks with 858 seasonal firefighters to make up for a dearth of inmate firefighters, many of whom were forced to quarantine after a training-camp coronavirus outbreak. But with crews still pushed to the breaking point, Newsom this week requested 375 fire engines and additional hand crews from other states, including Arizona, Nevada and Texas.

The state managed to avoid rolling blackouts Sunday through Tuesday nights as major consumers and residents cut back on energy use. With temperatures set to cool down today, Newsom said Wednesday would likely be the last “challenging” day for the state energy grid.

Confused about why California had rolling blackouts in the first place? CalMatters’ Julie Cart has a helpful explainer.

Kamala Harris accepted the Democratic Party’s nomination for vice president Wednesday night as the first California Democrat and first woman of color on a major party’s national ticket. In her acceptance speech, Harris traced her political values back to her California roots and the activism of her Indian mother and Jamaican father.

But she also took on the fighting role traditionally assigned to vice-presidential candidates, leveraging her experience as a prosecutor to volley harsh words against President Donald Trump.

When Harris accepted the nomination, she did so with her mother — and California — in mind.

California’s eviction moratorium expires in less than two weeks, and lawmakers, the Newsom administration, tenant groups and landlord associations are all racing to dam a wave of evictions that could push renters onto the streets and landlords into foreclosure — but keep getting caught in a thicket of financial, legal, political and logistical complications, CalMatters’ Matt Levin reports. Much is at stake for Newsom in particular, who dedicated his entire State of the State speech to California’s homelessness crisis and said addressing it was his top priority.

Lawmakers are currently considering two eviction proposals, though both are plagued with legal and financial concerns and neither is likely to land on Newsom’s desk in its current form.

In what appears to be the most stringent government action taken against individual Californians amid the pandemic, Los Angeles Mayor Eric Garcetti on Wednesday shut off the power at a Hollywood Hills mansion rented by TikTok stars Bryce Hall, Noah Beck and Blake Gray following a series of massive parties that garnered national attention. The news came less than two weeks after Garcetti first authorized the city to cut off utilities at houses that hold multiple large parties — many of which seem to be hosted by social media celebrities.

For their part, Hall and Gray responded with a TikTok in which they dance to the song “Electric Love.”