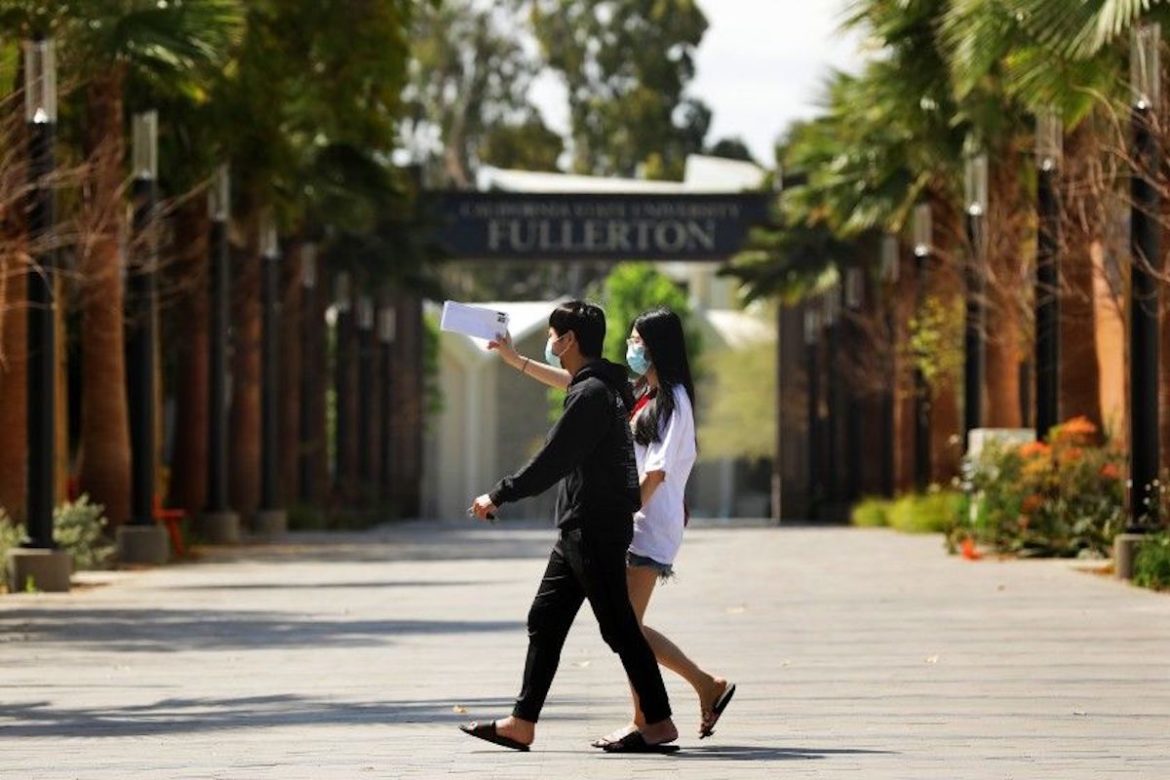 Cal State Fullerton student Linh Trinh, right, and her boyfriend Tan Nguyen walk around a deserted campus on April 21. The school is planning to begin fall semester with online classes, one of the first universities in the nation to make that move as campuses throughout the country grapple with how long to stay closed to most students amid the coronavirus pandemic. (Photo by Christina House/Los Angeles Times/ Polaris, via EdSource)

While the California State University system has allowed its 23 campuses to offer students enrollment deferrals in the past, the coronavirus has led some to be more lenient this year about when admitted students can start.

The deferrals are just one indicator of the tough choices students are making this fall. Some are delaying their enrollment to another academic term, while others are enrolling in local community colleges instead of following their plans to enroll in universities outside California. International students, the largest group at many campuses to receive deferrals, are seeking to delay until hopefully, the United States has crushed the coronavirus, and they can more easily get visas to enter the country.

The uncertainty students felt this summer is why for many CSU campuses, this is the first year they’ve allowed students to defer or delay their enrollment to another semester. Since the deferral decisions are made by each campus, there is no system-wide statistic for how many students are electing not to attend for the fall semester.

“We’ve never done deferrals for admission before,” said Aaron Lindberg, associate director of admissions and records at CSU Northridge. “But the fact that the chancellor’s office said because of the coronavirus you could actually do this; it was a significant change for us.”

The number of students requesting a deferral across the CSU and University of California campuses is small compared to the thousands of students enrolling in classes — albeit virtually — this fall. But they are higher than the number of deferrals requested last year, and they highlight the difficulties some students are facing.

The enrollment picture for many of the universities interviewed isn’t nearly as dire as predicted, despite more students requesting to delay when they start. CSU Northridge, for example, has about 31,600 full-time students enrolled, which is about 3.4% more than where campus administrators thought they would have. Lindberg said they’re projecting that by the start of classes Monday they will have nearly 33,000 total students.

“We were really scared and as a system, we were told to be prepared for maybe a 20% decrease in enrollment,” Lindberg said. “But we’re not seeing that. Our numbers are slightly higher than they were last year.”

Enrollment looks steady for many campuses this year because most students just didn’t have any other options. Some realized it was better to just start college than sit around without much to do, said Don Hunt, associate vice president of enrollment and student services at UC Davis.

“The job market is not the greatest and travel is not available and where you can travel is pretty limited,” said Scott Hagg, vice president of enrollment and management services at CSU San Marcos.

Jessica Perez, a 23-year-old Norco College graduate was one of the students who opted not to enroll. She was all set to transfer to CSU Fullerton until it became clear that classes would be virtual. She had tried virtual in the spring “but I found myself having panic attacks in class.” The first-generation college student chose instead to delay her enrollment and continue working for Amazon in one of their warehouses.

“I was hoping and waiting maybe there would still be in-person classes,” she said. “Because I knew if it were all online, I wouldn’t go.”

Melvin Adams, 18, of Pasadena, planned to attend Drexel University in Philadelphia this fall to study finance. With classes moving online because of the pandemic, he didn’t want to pay the school’s pricey out-of-state tuition.

“If it’s online anyway, even a city college might be a better option at this time,” he said. At Drexel, “even after the financial aid, it’s about $30,000 a year.”

His new plan is to attend Pasadena City College “close to home” and after two years transfer into the UC system.

CSU and UC have rules to delaying enrollment. Some campuses only allow students to defer one term, while others allow a full academic year, especially for international students. Some campuses, like CSU San Marcos, will evaluate extending deferments this fall. If students accept a deferral, they aren’t allowed to enroll in a community college or another university during the gap time. If they do, most universities will force them to reapply for admission.

“Unfortunately, at that point, they need to continue with the community college and transfer with 60 units,” said Hagg.

So far, 32 incoming freshmen and transfer students have been approved for deferral.

Hagg said one of the most common explanations students gave was that they were experiencing financial challenges. Another reason, “a few mentioned they wanted a normal experience,” he said. “Students who want to have that traditional college experience will hold out until the spring.”

Most of the UC campuses have allowed deferments in the past. At UC Davis, there is typically anywhere from 200 to 250 deferments, but this year that number has increased to at least 275, of which about 150 are deferring for the full year, said Hunt. The campus is accepting deferrals up to the first day of classes on Sept. 30.

“We encourage students to do what’s right for them,” he said. “You never know when life is going to hit you. These are financial decisions, life changes, or something happens with parents or something that causes them to rethink, and now with COVID, there is a safety issue. UC Davis will primarily be online right now, and some have not had a positive experience with online from high school.”

Hunt said although the number of deferrals is higher this year than usual, they’re pleased to see it didn’t double from last year, which is what some enrollment analysts predicted at the end of the spring term. Although they won’t have exact figures, Hunt said the university is on track to hit its enrollment target of 9,500 students.

At UC Riverside, past deferrals were granted for military or medical reasons.

The campus had so few deferrals in the past that the number wasn’t tracked, but this year there are 38, mostly international students, who were approved.

“It’s pretty apparent our international students have been challenged to get visa appointments or physically challenged with getting to the U.S.,” said Emily Engelschall, interim associate vice-chancellor of enrollment services for the campus. “Although our classes are virtual, some of them have had a desire to be here or live on campus.”

Officials at nearly all the CSU or UC campuses, interviewed about their deferral process, said they are worried about losing these students between academic terms and will try to maintain regular communication with them to make sure they eventually enroll.

On the Northridge campus, administrators have already talked about a separate communication plan for staying in contact with those students, Lindberg said. They also want them to complete their freshman orientation virtually, despite taking a deferral.

“We will do considerable follow up with students to get them prepared and ready to start,” Hagg said.

As for Perez, although she is delaying her dream to go to Fullerton, she doesn’t plan to sit idle. She’s enrolling in social media and marketing classes on Skillshare, an online learning platform, in hopes it will help her learn to overcome her anxiety to online while gaining new skills.

“I want to keep going,” she said. “My hope is for the spring ideally everything will be in-person, but if they continue online, that’s something I’ll have to consider and if I’m ready then.”