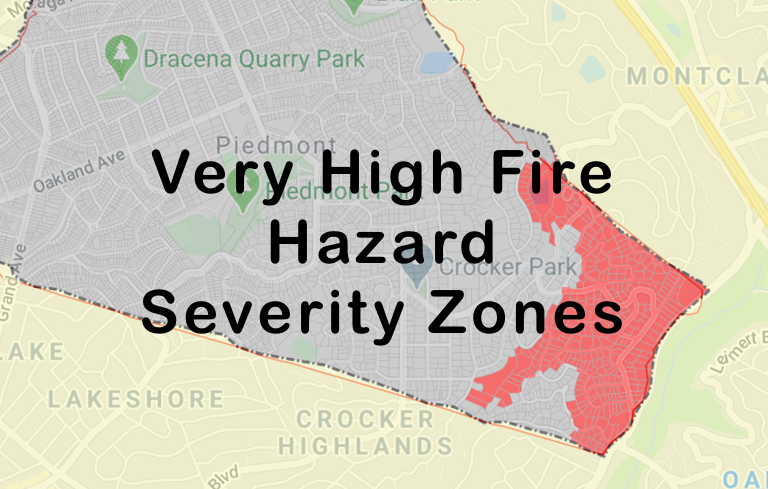 Neighborhoods (red area) around Park Blvd, St. James Dr. and Tyson Lake have been designated "very high fire hazard severity zones" by CalFire, and homes will be required to manage the surrounding vegetation in order to mitigate wildfire risk.

The City Council has taken further steps to help protect Piedmont from the ravages of a catastrophic wildfire, following up on a March move to designate the entire city as being within a  “wildland-urban interface fire area.”

The council on Aug. 3 adopted a “very high fire severity zone” map developed by state fire officials, which includes the southeast section of Piedmont — perhaps 20 percent of the city — near Park Boulevard, St. James Drive and Tyson Lake, as well as surrounding parts of Oakland.

Fire Chief Bret Black told the council that property owners in this area will have to meet higher vegetation management standards, because the fire danger there has been deemed to be higher than in other parts of town.

The newly adopted ordinance also updates the vegetation management requirements in the city code for owners of parcels outside of the “very high fire severity zone.” Black told the council the new requirements are designed not only to increase safety, but to offer more clarity about what property owners must do. Piedmont firefighters have already been working some of these updates into their enforcement practices, Black said, to good effect.

Part of the reason for these updates, Black said, is to have Piedmont’s codes align with fire prevention “best practices.” These include, in the ordinance:

Councilwoman Betsy Smegal Anderson asked Black whether these new more stringent rules would hasten removal of trees from residential yards; Black’s answer was “no,” even if more potentially hazardous branches may need to be trimmed back from near structures.

Piedmont resident Rajeev Bhatia told the council the ordinance doesn’t address the city’s overall “fuel load,” even if species around buildings are cleared.

“It totally falls short on what happens with vegetation outside the defensible zone” around buildings, Bhatia said.

Black responded to that by saying the updates approved Aug. 3 will set Piedmont up to implement other changes in a “deliberate but measurable way” in the relatively near future.

“There are more opportunities for improvement and alignment with the (state) code, all over the place,” Black said. “We are better than we were a year ago …. But we still have work to do.”

City Attorney Michelle Kenyon suggested the fire department do community outreach concerning specific steps homeowners will have to take, and other actions that may be recommended but not necessarily legally required.

“We’ll be sure to engage the community in the new areas,” said Black, adding that the City of Piedmont does not charge to make fire inspections of local properties.

Councilwoman Jen Cavenaugh was glad to help strengthen local fire safety. The devastating Oakland Hills Fire of 1991 was only a few miles away, she noted, and conditions only seem to have gotten worse since then.

“As much as we’re talking about a pandemic and COVID and all these other things right now, a wildfire sweeping through our community would be way more devastating,” Cavenaugh said.