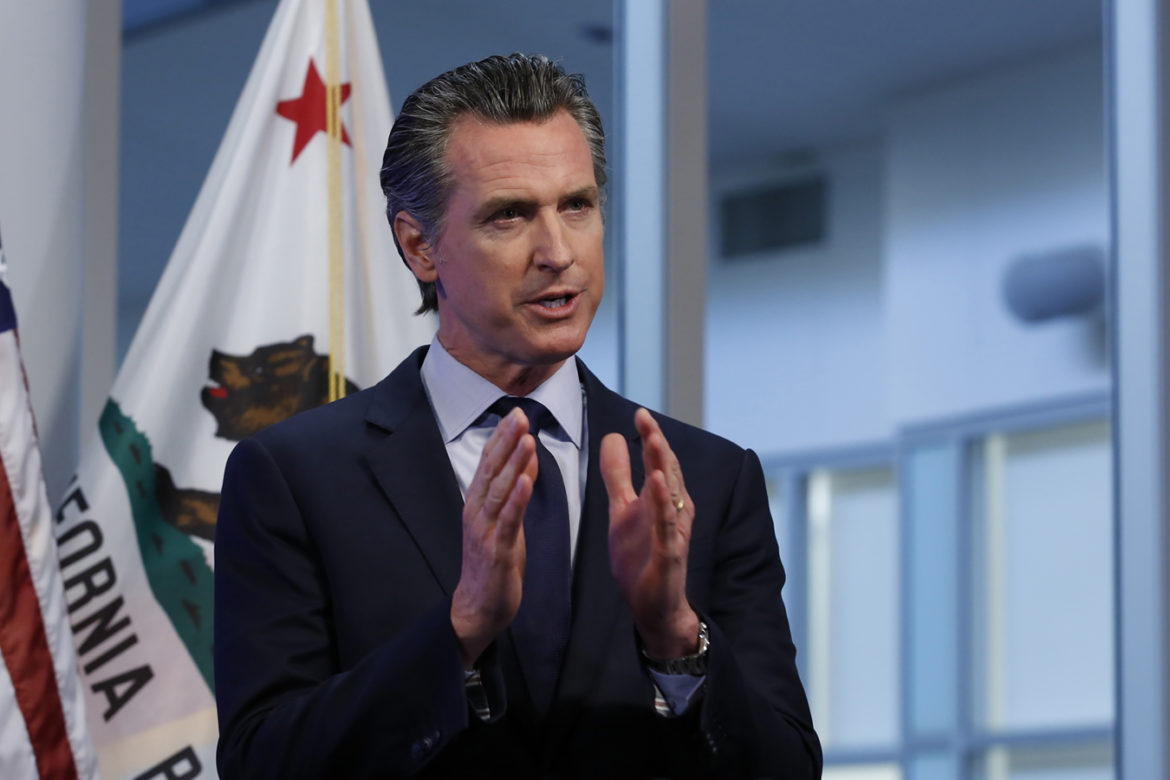 Gavin Newsom, governor of California, speaks during a news conference in Sacramento, California, U.S., on Tuesday, April 14, 2020. Newsom outlined his plan to lift restrictions in the most-populous U.S. state, saying a reopening depends on meeting a series of benchmarks that would remake daily life for 40 million residents. Photographer: Rich Pedroncelli/AP/Bloomberg via Getty Images

The failure of California’s infectious disease monitoring system for a stretch of at least 20 days in July and August triggered potentially deadly fallout that continues to reverberate across the state.

The fallout has been most severe in heavily populated counties, which rely primarily on a statewide electronic information system to guide their pandemic response. Local health departments couldn’t clearly see where the coronavirus was spreading, dramatically slowing their efforts to trace and track new infections — leading to more death and disease, public health officials said.

Data system failures left California with a backlog of about 300,000 lab reports. Of those, nearly 15,000 turned out to be positive for COVID-19, according to state Health and Human Services Secretary Dr. Mark Ghaly.

“By the time you get those cases, even if you do your best to trace the contacts, you might be too late,” said David Campos, deputy Santa Clara County executive. “Individuals who were positive didn’t know they were positive and therefore may not have isolated and quarantined, so they ended up spreading the virus to other people unknowingly.”

Gov. Gavin Newsom’s administration is still struggling to fix the problems and prevent future breakdowns, even as school districts are weighing difficult decisions about sending kids back into classrooms, businesses are contending with repeated openings and closures, and the state is working to tamp down rising infections — all life-or-death scenarios that rely on accurate COVID-19 data.

“The whole key to lab testing is the speed with which it’s done,” said Bruce Pomer, a public health expert and chief lobbyist for the California Association of Public Health Laboratory Directors. “The system is slower than it should be, and it means more people are going to get sick and die. The lifeblood of public health is data.”

Ghaly said he and Newsom first became aware of the magnitude of the state’s data failures on Aug. 3, though the California Department of Public Health had alerted counties about problems as early as July 15.

By the time Ghaly said he was informed, the state infectious disease database — the California Reportable Disease Information Exchange, known as CalREDIE — had experienced a series of breakdowns, including an outage that prevented electronic lab reports from flowing to counties, and a lapsed security certificate needed by the commercial lab giant Quest Diagnostics to transmit records. The problems did not affect death and hospitalization data.

The state says it has since cleared the backlog.

“It is clear that CalREDIE simply does not have the capacity to scale as we had hoped,” Newsom said following the resignation of the state’s top public health officer, Dr. Sonia Angell, after the data system collapse. “We will reform that.”

California isn’t alone in its COVID-related data problems. Iowa recently discovered a major flaw that backdated thousands of test results; North Carolina learned that another commercial testing company, LabCorp, had been including out-of-state tests in its data since April; and Alabama found that some labs were not properly sending test results to the state.

But the breakdown in California stands out for its size and consequence.

In Santa Clara County, public health officials felt they finally had resources to aggressively track people who might have been exposed to the virus.

But a contact tracer for the county who declined to be named confirmed that the number of cases trickling in from the state data system was so slow by late July that tracking operations had nearly ground to a halt.

Santa Clara County did not receive data on many residents who tested positive during that time. Dr. Sara Cody, the county’s health officer, said earlier this month that she had discovered missing cases of infected people as far back as July 8.

“If we can’t get the data from the state system, we’re all kind of flying blind,” said Contra Costa County health officer Dr. Chris Farnitano. “Then our case investigation and contact tracing efforts aren’t very effective.”

Contra Costa and other counties are still digging themselves out of the data failures — and working to dramatically expand testing. But public health officials worry that an influx of tests will overwhelm the system, once again undercutting counties’ ability to adequately respond to the pandemic.

“This really puts our whole strategy at risk,” Farnitano said. “We’re looking to start doing in-person school at some point in the fall, if conditions allow, but that would add a whole bunch more tests that need to perform in the system.”

Mendocino County provides a glimpse of how vital real-time data is for an aggressive response. Since the beginning of the coronavirus pandemic, the sprawling rural Northern California county has kept up its old-school strategy of tracking infectious diseases by telephone and fax machine, providing a reliable flow of COVID-19 data even as the state system crashed.

That meant local officials could see that cases were spiking in the county even as state data suggested it was faring relatively well, keeping the county off the state watchlist. Mendocino County health officer Dr. Noemi Doohan nonetheless decided to proactively shut down high-risk businesses like bars without being ordered to by the state.

“I wanted to retain local control for our county, and I also wanted to do the right thing,” Doohan said.

The county has since been added to the state’s watchlist, which means that nine schools that had planned to hold in-classroom instruction now either have to move teaching online or seek permission to open from the county and state.

In Riverside County, where contact tracing efforts were also hampered by the data failure, public health director Kim Saruwatari said she is at the mercy of the state data system. She said fax-and-phone data collection efforts like those used in Mendocino County are not possible for larger counties like hers.

“The volume of data that we have coming in, it would take an army to receive all the reports and enter them into a system separately,” she said.

Saruwatari and other county officials had been asking for state assistance to identify potential data discrepancies in the weeks before the state took action. During that time, state health officials knew there were issues but appeared to be unaware of the magnitude of the data failures and were slow to respond, some county officials said.

“We can’t get a hold of anyone” at the California Department of Public Health to help, wrote Wendy Hetherington, chief epidemiologist for Riverside County, in an email to a state epidemiologist while trying to figure out why she couldn’t access critical data.

“I am not aware of any specific issues, however we are starting to notice problems … because the files are becoming too large for our computers to obtain in this manner,” the state epidemiologist responded.

Kate Folmar, a spokesperson for the California Health and Human Services Agency, said in a statement that the administration has “accelerated a replacement project” to ensure accurate, timely COVID-19 data. A state bid for the project went out last week, Folmar said, and Ghaly said this week that the new system is weeks away from being ready.

For years, the state has patched holes in its communicable disease information system, which was designed 20 years ago and also tracks other infectious diseases, including the flu.

Local health officials, who blame the long-standing lack of investment in public health infrastructure, describe it as clunky, slow and at times ineffectual. But COVID-19 has presented an even bigger challenge than routine cases of measles, syphilis and meningitis.

“Our systems were not designed for this kind of pandemic threat,” said Daniel Zingale, a former top Newsom adviser who led health care initiatives for previous Democratic and Republican administrations.

Data failures are likely to continue given the limitations of the system, and not only will they harm public health officials’ ability to trace COVID-19 and prevent its spread, but they will also erode the community’s confidence in public health efforts, Saruwatari and others said.

Already, comments on social media and at public meetings suggest that state failures have undercut trust in public health, especially in conservative-leaning regions like the Inland Empire and California’s rural north.

“There’s been a lot of the questioning of the data all along, like if somebody dies, did they really die of COVID-19,” said Lake County health officer Dr. Gary Pace. “Now people that were prone to not trust us or not follow guidance before are even less likely to follow it.”