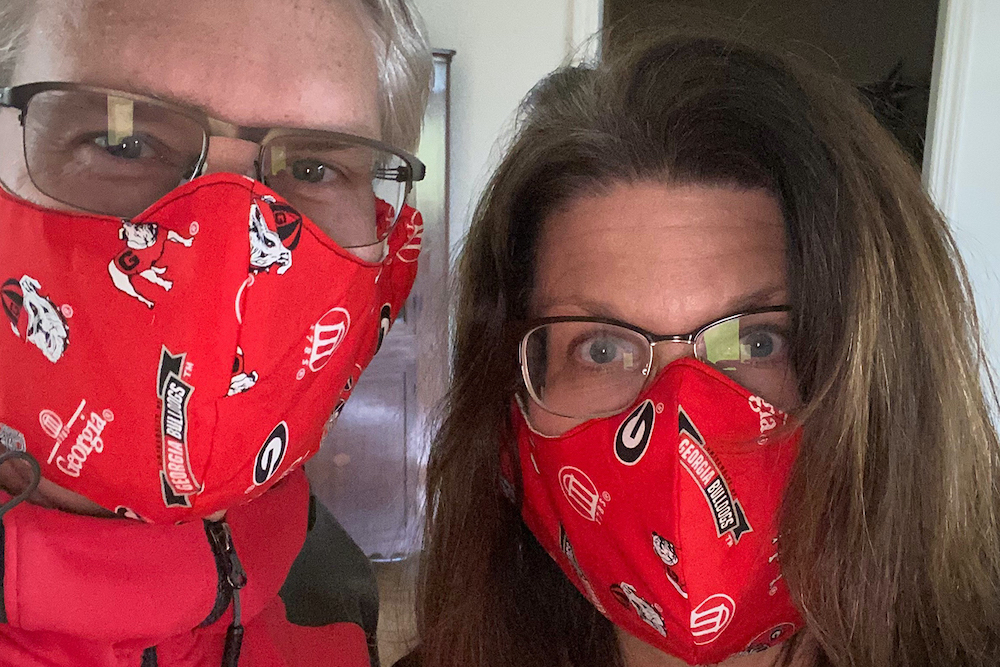 Richard Costigan poses with his wife, Gloria Costigan, in June, before contracting COVID-19. The former Schwarzenegger aide has been chronicling their journey on Twitter. (Courtesy of Richard Costigan)

SACRAMENTO — The tweet Richard Costigan posted July 23 was bluntly honest: “We tried our best to limit exposure to #COVID19 but we slipped up somewhere.”

Costigan tweeted while waiting anxiously in the parking lot of a hospital outside Sacramento. The veteran Republican political consultant had just dropped his wife, Gloria, off at the emergency room. He wasn’t allowed to go in with her.

His thoughts traveled back to the small family gathering they had attended in Georgia nearly two weeks before with their 23-year-old daughter, Emma, and 17-year-old son, Andrew. They had planned it so carefully. Nobody wanted to get Gloria’s 88-year-old mother sick.

But here they were, Costigan’s wife battling for breath in the ER, and Costigan sitting in his car coughing.

The family’s journey since then has been one of sleeplessness, pain and worry about the future. And it’s one that Costigan, who worked as deputy chief of staff for Republican Gov. Arnold Schwarzenegger, is taking to social media and his 4,400 Twitter followers.

Looking back, Costigan, 54, doesn’t think he and Gloria, 53, contracted the virus on their separate flights to Georgia, where the family owns a home. The flights were nearly empty and the passengers and crew wore masks, he said.

In Georgia, the family continued its regimen of social distancing and wore masks whenever they left the house — protocols they had followed for months at home in California.

And when they gathered with their relatives on that sunny Saturday in July, they were careful to space the chairs 6 feet apart in the backyard.

But they didn’t wear masks, he said, and family members went in and out of the house to grab drinks and use the restroom. “We thought we’d done everything right, and we screwed up,” Costigan said in a July 29 phone interview. “We made a big mistake.”

Now seven of the 10 family members who attended that backyard gathering are sick.

Emma and Andrew don’t have any symptoms but haven’t been tested. Exactly who introduced COVID-19 to the group is unclear. No one showed signs of sickness at the time. The first person to become sick was Gloria’s sister, then her niece — then her mom.

Gloria Costigan became sick after they returned to Sacramento, spent a night in the hospital, needed an oxygen machine at home and developed COVID-related pneumonia. By Saturday, however, she no longer needed supplemental oxygen.

Costigan’s reputation as a straight shooter, respected and liked by both Democrats and Republicans, could help change minds about the virus, said Barbara O’Connor, emeritus director of the Institute for the Study of Politics and Media at California State University-Sacramento.

“I think that Richard is being very honest about what’s going on,” said O’Connor, who has known Costigan for decades. “It’s not political. It’s really human.”

Lawmakers who have responded on Twitter with messages of support include state Controller Betty Yee, and state Sens. Richard Bloom and Steve Glazer, all Democrats. Sen. Richard Pan (D-Sacramento), a physician who chairs the Senate Health Committee, has texted well wishes to Costigan.

For his followers, Costigan’s chronicles of the virus remain grim.

“I can’t go very far without needing to lay down,” he wrote in a July 25 tweet. “Been sleeping constantly last two days and the joint pain is intense.”

In another tweet two days later, the symptoms were the same:

Gloria’s 88-year-old mom is at home with a cough, he said.

Costigan talked to California Healthline about his family’s disease odyssey and what he hopes people will take away from his COVID-19 Twitter chronicles. The interview has been edited for length and clarity.

Q: You have tweeted in such detail about the horrible symptoms you experienced. How do you feel now?

My ribs just hurt with the coughing and the fatigue, and my joints hurt. I have the sweats and vivid dreams. I sleep on the floor because it’s more comfortable than the bed.

This thing just hits like a ton of bricks. It’s also the nervousness of it. How long is it going to last? Who are we going to expose to it? I just don’t know what the end game is.

Q: What is it like at your house now?

Our daughter can only stand on our front porch. She delivers food to us. She puts it by the door, rings the bell and stands 6 feet back.

Q: You suspect you got COVID from the family gathering in Georgia. How do you trace it to that event?

When we looked at everybody that was at the gathering, we were trying to figure it out. It started with my sister-in-law getting sick. Out of 10 of us, seven of us are sick.

We never thought of our family being the one to harm us. Sometimes, you can’t control your anger. You want to be mad at someone. Gloria and I just decided we’re not going to blame anyone. We just don’t know who had it.

Q: How has this experience been so far for you and your family?

It’s been a bizarre week. I went to Kaiser Thursday night. You drop your significant other off. You can’t go in. Off they go to the tented area and I wait in the parking lot. She is admitted. Her oxygen levels are low. She gets a CT, she gets a shot in her stomach for possible blood clots. She gets out Friday and they send oxygen tanks to your house. … She’s in her early 50s and doesn’t have any health issues [otherwise].

Saturday, my son is doubling over in pain. I end up in the ER with my son, and I start coughing. I’m getting the side eye from everyone. Thankfully, he had a kidney stone.

Q: What kind of precautions have you and your family taken these past few months?

We hadn’t been anywhere for months. It was: Stay home. Work from home. No school.

Going to the store was extremely stressful. You go to the store, mask up, glove up, you bleach your shoes when you come home, spray down your car, wash your hands, use a towel to dry your hands, the towel goes straight into the washing machine.

Our son got frustrated with us because we wouldn’t let him see his friends. He saw photos of friends of his partying at Folsom Lake. We were the hardcore parents.

Q: In posts on social media, you are asking people to wear a mask. Why do you think it’s become a political issue?

I’ve been taking flak from friends of mine because I’ve been posting “wear a mask.” Wearing a mask — somehow it has become a freedom issue. It’s not a grand conspiracy. Wearing a mask is a simple thing to do to prevent someone else from getting sick. I do not understand how this has turned into a political issue. The government has a role to play. This is a health care crisis.

Q: How do you move forward in this pandemic?

We’re locking down. Nobody is coming into our circle. I don’t want it again. To see my wife this way is hard.

I want folks to realize this thing is non-discriminatory. It doesn’t matter who you are.