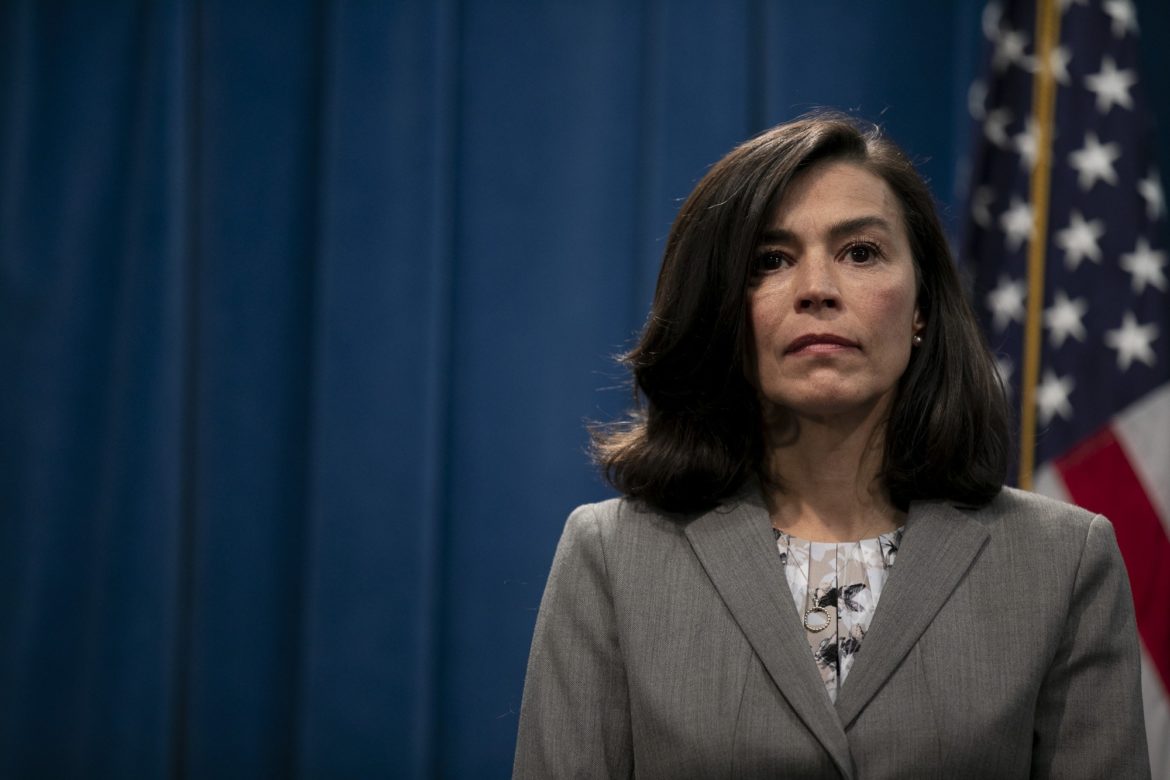 Dr. Sonia Angell, Director of California Department of Public Health, at a press conference in the state capitol following the first COVID-19 death in California on March 4, 2020. Angell has just announced that she is resigning from her post. Photo by Anne Wernikoff for CalMatters

The director of California’s public health department resigned late Sunday night, less than a week after state officials reported a tech glitch that resulted in an undercount of coronavirus cases and confusion about the scope of infections as the state’s death toll crossed 10,000.

Dr. Sonia Angell didn’t state a reason for her departure. She is the second high-ranking official to leave the department in two months, raising questions about how the state plans to handle a critical moment in the pandemic while addressing data snafus and communication problems.

Dr. Mark Ghaly, the state’s health and human services secretary, said Friday that neither he nor Newsom knew about the backlogged tests until after a press conference at which the governor reported a steep decline in the state’s seven-day positivity rate, likely due in part to the undercount. But the state Department of Public Health had warned local health departments about the data problems as early as July 31, three days before Newsom’s press conference.

The backlog of a quarter-million lab records was caused by technical changes made after a server crashed and by the state’s failure to renew a certificate required to receive data from Quest Diagnostics, a commercial lab used by coronavirus testing sites across California, Ghaly said. As a result, California did not receive Quest data from July 31 to Aug. 4.

The coronavirus bottom line: As of 9 p.m. Sunday night, California had 554,160 confirmed coronavirus cases and 10,293 deaths from the virus, according to a CalMatters tracker.

With California’s eviction moratorium potentially expiring this week and federal weekly unemployment benefits of $600 expiring last month, millions of Californians are scrambling to stave off a fast-approaching financial cliff by liquidating 401(k)s and starting side hustles, CalMatters’ Jackie Botts reports. Jessica Gallup, 37, said she called the state unemployment department over 3,600 times to resolve her claim while caring for her five-month-old daughter and selling homemade candy out of her South San Francisco apartment.

President Donald Trump on Saturday signed an executive order that would extend $400 weekly benefits, but it remains unclear if he has the authority to do so given that Congress controls federal spending — and remains deadlocked over a relief package. Meanwhile, the state unemployment department has said it could take up to 20 weeks to process additional federal benefits.

The final six Californians who will redraw the Golden State’s electoral map — defining its legislative and congressional districts for the next decade — were selected Friday by the eight other members of California’s Citizens Redistricting Commission. Four of the new members are Latino, which didn’t satisfy advocates who called for all six to be Latino after none of the first eight randomly selected members were Latino. California’s population is about 40% Latino.

Of the 14 commissioners, five are Democrats, five are Republicans and four have no party preference. Eight are female and six are male. Three are white, three are Black, four are Asian/Pacific Islander and four are Latino. Seven are from Southern California, four from the Bay Area and three from the Central Valley.

At most California colleges and universities, the vast majority of classes must be held online, dorm rooms should be limited to one student, dining halls should serve “grab and go” meals, water fountains are banned and bathroom sinks should be separated by plastic screens, according to guidance released Friday by the state Department of Public Health. The state’s first formal guidelines for UC, CSU and community colleges came weeks after each announced mostly virtual semesters. The systems are now reviewing their limited housing, dining and in-person instruction plans to ensure compliance, EdSource reports. The guidance also encourages “regular” testing of students and staff and permits college sports under certain conditions.

Thursday, Aug. 13 at 10 a.m.: When — and how — will California’s 6 million students be able to safely return to some form of in-person learning? Join CalMatters for a conversation with Don Austin, superintendent of Palo Alto Unified School District; Heather Hough, director of Policy Analysis for California Education; Lakisha Young, parent and founder of Oakland Reach; and Elijah Tsai, a senior at Lincoln High School in Stockton and president of the California Association of Student Councils. Register here and submit your questions here.