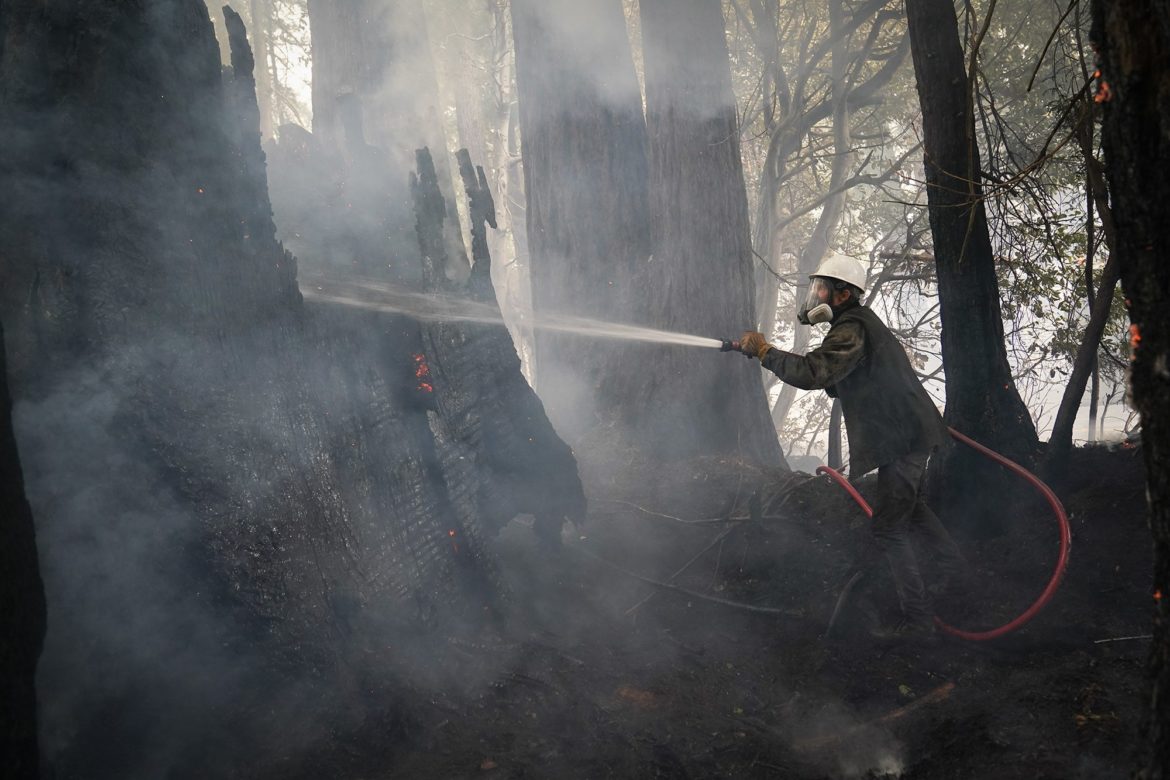 As fires continue to rage across the state, stretching understaffed firefighting crews to the limit, some Californians are taking matters into their own hands and forming makeshift brigades to protect their communities.

In the face of limited help from fire agencies, about 50 Bonny Doon residentsdefied evacuation orders to defend their town against the CZU August Lightning Complex fire tearing through Santa Cruz and San Mateo counties. In nearby Boulder Creek and Ben Lomond, volunteer firefighting crews asked an elite emergency response team to help them set up temporary command centers.

And in Vacaville, one man used a 30-can pack of Bud Light to fend off flames from the LNU Lightning Complex fire.

Cal Fire, the state firefighting agency, later sent reinforcements to help residents — but is stretched thin due to a dearth of inmate firefighters, historic blazes that have charred an area larger than Delaware, and a limited supply of out-of-state firefighters due to fires blazing across the West.

Crews made progress on containing the blazes Monday and Tuesday as more supplies were made available and weather conditions improved — but firefighters warned there was still a long way to go.

1. Some students can return to school, state says

Students with disabilities, those who are homeless, English language learners and students at risk of abuse or neglect can return to school in small groups for in-person learning — even in counties on the state’s coronavirus watch list — under guidelines the state Department of Public Health released Tuesday. Groups will be limited to 14 students and two supervising adults, and groups cannot mix with each other, according to the guidance. The news, which adds yet another wrinkle to the state’s complex educational policies amid the pandemic, comes as more counties fall off the watch list and edge closer to meeting the requirements for reopening campuses. Gov. Gavin Newsom is also set to release new guidelines for reopening businesses this week.

Newsom took a position Tuesday on four propositions, sharing for the first time his stance on some of the measures on California’s November ballot in a sign that campaign season is ramping up. The governor revealed his support for reinstating affirmative action policies in state colleges, universities and agencies (Prop. 16), restoring the right for parolees to vote (Prop. 17), and banning cash bail (Prop. 25) — as well as his opposition to rolling back certain criminal justice reforms (Prop. 20).

The governor remained mum on several high-profile and controversial ballot measures, including one that would raise property taxes for large businesses and funnel the funds to local governments and schools (Prop. 15), and one that would allow Uber and Lyft drivers to remain independent contractors with some additional benefits (Prop. 22).

Three California school districts discriminated against Black students and those with disabilities by punishing them more harshly than other students for similar actions, and will now embark on five-year corrective plans overseen by an independent monitor, according to settlements Attorney General Xavier Becerra released Tuesday. The news comes as school districts across California reconsider the presence of campus police amid arguments that they disproportionately arrest and discipline students of color.

Key findings from the California Department of Justice’s investigations include:

More than 35,000 Californians have filed COVID-19 workers’ compensation claims since the pandemic began, translating to potentially more than $2 billion in costs for employers and their insurers, CalMatters’ Barbara Feder Ostrov reports. Health care workers made up nearly 40% of all coronavirus-related claims, and Imperial County — which had the state’s highest case rate in June — saw the highest rate of claims. Meanwhile, lawmakers are currently considering several bills that would extend and expand Newsom’s executive order presuming essential workers who contracted COVID-19 were infected on the job.