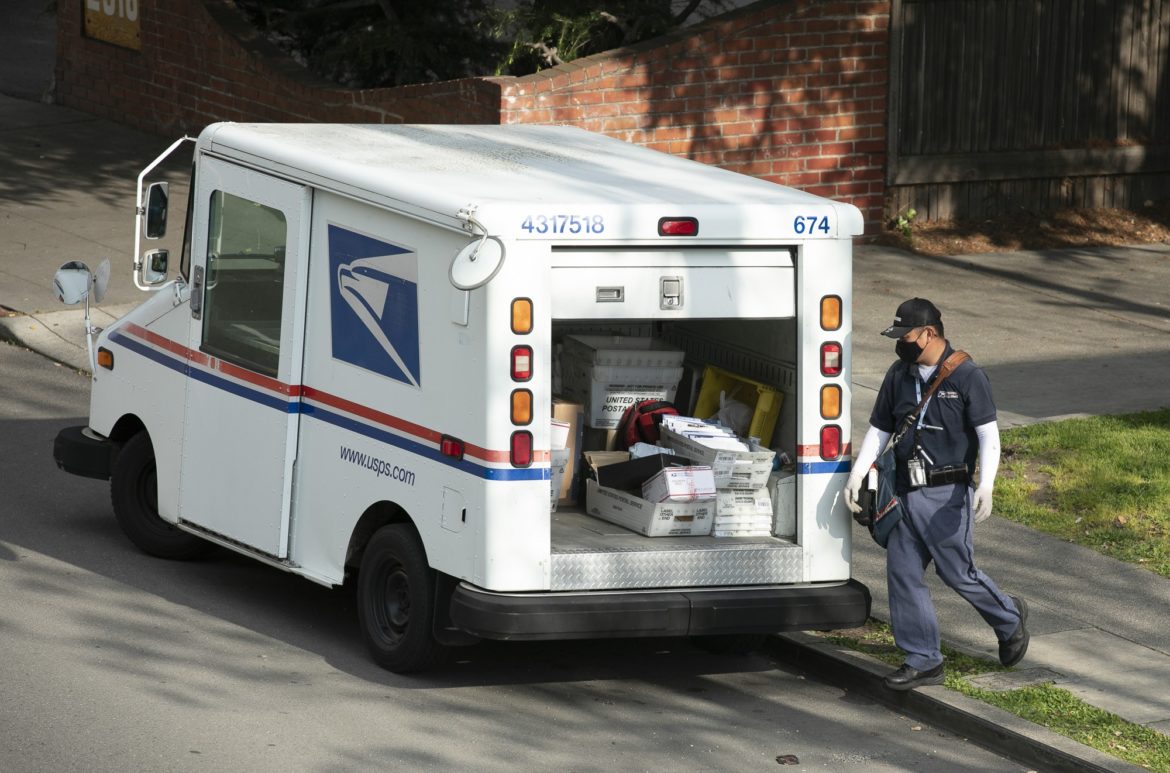 A mail carrier wearing a mask and gloves in Berkeley on March 27, 2020. Postal employees are considered essential during the shelter in place. Photo by Anne Wernikoff for CalMatters

Voter rights groups warn that recent Postal Service changes could make it more difficult for voters to cast ballot in the mail this November. But Californians still have options.

For months President Donald Trump has been reluctant to extend a lifeline to the financially infirm Postal Service, a reluctance his critics have said is motivated by his loathing of vote-by-mail.

Today Trump made that subtext…text.

Speaking about the ongoing COVID relief negotiations on Fox Business, the president claimed that without new funding for the Postal Service, California and other states that plan to send every voter a ballot before the November election will be out of luck.

“Now, they need that money in order to have the post office work so it can take all of these millions and millions of ballots,” the president said. “If we don’t make a deal, that means they don’t get the money. That means they can’t have universal mail-in voting. They just can’t have it.”

Today’s statement comes amid a flurry of changes at the nation’s public mail delivery system, including placing new restrictions on overtime and restructuring executive leadership. Voting rights organizations say that could make it more difficult for voters to cast ballots by mail during the coronavirus pandemic.

In an Aug. 10 letter to recently appointed Postmaster General Louis DeJoy, Padilla warned that the changes “create unnecessary risk so close to the election and undermine the ability of state and local election officials to administer free and fair elections.”

But California voters will not be entirely dependent on the timeliness of its mail carriers.

Earlier this year, Democratic Gov. Gavin Newsom signed a bill that accounts for the possibility of delivery delays. Now county registrars are required to accept mail-in ballots up to 17 days after Election Day — so long as they are postmarked by Election Day itself.

California voters will also have the opportunity to bring their mail-in ballot to a polling location or drop box. And counties will still operate a reduced number of in-person voting locations, allowing voters to cast their ballots the old-fashioned way.

In his remarks today, the president seemed to be referring to the $3 trillion COVID recovery bill passed by the Democratic-controlled House of Representatives in May, which included an additional $25 billion for the Postal Service. That proposal has stalled in the Senate. Alex Sackler, a lobbyist with the Coalition for a 21st Century Postal Service, an industry group representing high-volume mail users, said the most recent version of a potential compromise put funding for the service somewhere between $5 billion and $15 billion.

But contrary to what the president said, the Postal Service has enough funding now to handle the surge in ballots.

“Without one additional dime, the Postal Service has both the capacity and the cash on hand to handle all the ballots that will be put in the mail this year,” he said. According to the Postal Service’s own number crunchers, the nation’s public mail delivery system has enough money to operate through the end of the year.

The funding proposal has “nothing to do with funding for mailing,” said Gaare Davis, president of the American Postal Workers Union in California. “As always, the president is trying to divide the American people from the Postal Service.”

Even so, the president’s statement may indicate the extent he is willing to go to prevent states from effectively administering vote-by-mail elections.

Though the president regularly asserts that making it easier for voters to cast their ballots by mail during the pandemic will result in widespread fraud and abuse, there is vanishingly little evidence to back that up.

“In the middle of a global pandemic, the safest way for voters to cast their ballots is through the mail,” said California’s senior U.S. senator, Dianne Feinstein, in a statement. She has co-sponsored a bill that would provide an additional $25 billion to the Postal Service for pandemic-related expenses. “It’s unbelievable that an American president wants to defund the Postal Service to prevent individuals from exercising their constitutional right to vote.”

Future funding is only one of the Postal Service’s concerns. The crackdown on overtime, and other cost-cutting measures, have resulted in widespread reports of delayed deliveries. Other reporting suggests the service is removing ballot processing machines from its facilities around the country, and that Postal Service leadership is considering hiking the delivery rates for mail ballots, something a spokesperson for the service denied is in the works.

“The question is whether the operational changes put into place by the new postmaster general will do what he wants, which is to make the place more efficient and save money, or if it will do what a lot of people on the Hill fear, which is simply delay the mail,” said Sackler.

With the possibility of postal delays and reduced mail capacity, Kim Alexander, president of the nonprofit California Voter Foundation, said she is encouraging voters to opt for in-person voting sites or drop boxes over the mail system whenever possible.